Donating Member
Registered
We looked around,lots of garbage for sale,we ended up deciding on a 1999 Honda CBR 900RR. It's in really good shape for its age,completely stock too which I like. Very cool guy owned it,really mellow rider(huge chicken strips),I know the shop where he's had it serviced so its all good.Needs a new front tire soon and chain and sprockets but Shiney Side Up (his Org screen name...LOL) is pretty excited. I've let him ride everything I've ever owned except the Busa's...

and he's a good rider,just never owned a sportbike. He's been riding around on one of my choppers for the last couple years (107 cu in S&S,slight rake,97 HP,all PM stuff) but now its time for him to ride something he can atleast have a chance of keeping up with me on.

So we got in a couple hours on it today,I think he'll rock it. The thing sure is highly flickable,really surprised me. When I took the first ride on it for him I was expecting a big heavy dog. Not so.We had just come from looking at a 2001 Gixxer 750. They are sweet bikes,I had one about 10 years ago,but the bike and the owner were a little roachy.

I think this was a better choice for his first sportbike. I was going to surprise him on Saturday help him buy a Busa I had my eye on,I took him to go see it,but it sold the day before.

He wants a Busa bad,but its probably better he kick the shi7 outa this thing first. 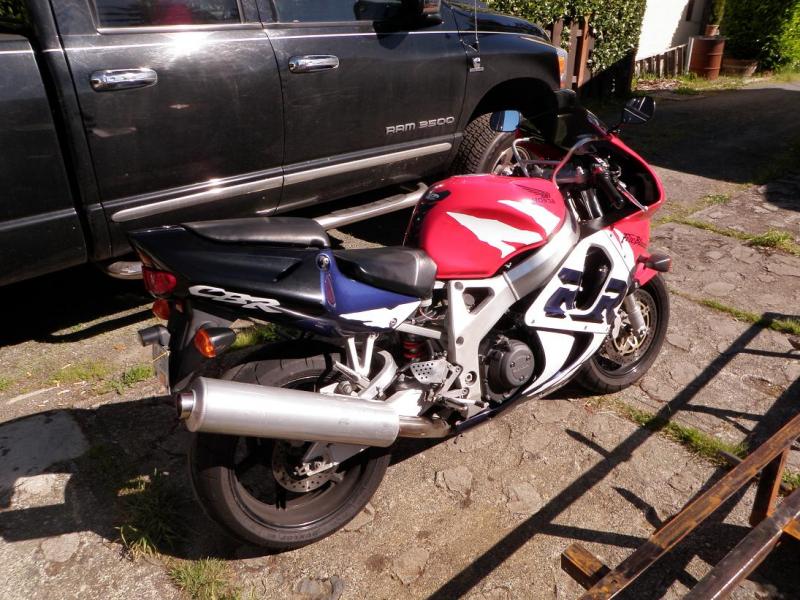 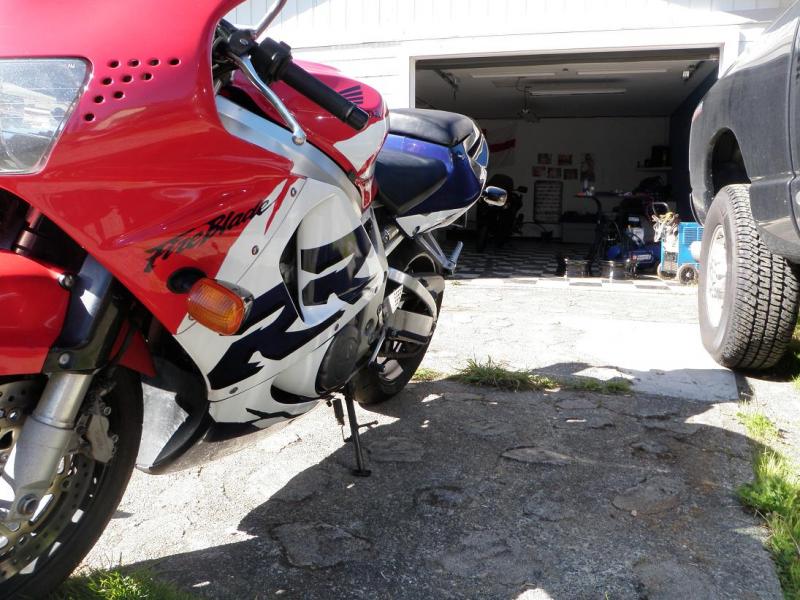 Donating Member
Registered
I love it!

Moderator
Donating Member
Registered
Wow, that is really cool, you dont find them stock like that.

Donating Member
Registered
He's pretty damb excited. We had a blast buying it too. Here's how it whent down:

We sent a text to the owner saying we were running a bit late,he said no worries but that there was someone on the way with a deposit. So we blast over there at Busa speed...Busa followed by chopper speed...LOL. Cool,we have beat intended buyer. We look the bike over,Mike wants it,so we take 5 minutes to ourselves to discuss an' offer. Boom. Other interested dude shows up. Climbs outa his car and barks at us..."Yer not here to buy my bike are ya?" . I'm like WTF,but remain silent. Dikwad goes and talks to the owner,apparantly offers 800 less than asking price and wants to leave a 50 dollar depostit. Then Mr.Dik R. Wad comes outa the garage,walks up to me and says in a shiddy tuffguy tone...'Well,are you gonna pi55 or get off the pot!" I look over at my nephew and he's got an' O dude,you shouldn't have said that,look on his face. I turn back to the guy and say..."Well actually,I'm going to do whatever the fruck I want." Dik's teenage son's eyes get as big as saucers. My nephew starts to laugh a bit. Bike owner just stares. I walk past Dik to the owner and ask what he offered. Owner tells me,I say..."I'll give ya 200 more." Dik says to owner,"well I guess its sold then". Then I said "I would have given him more than the asking price,just 'cause yer an' azzhole."

I have no cash on me,owner and I do the deal with a hand shake. Owner says.." I didn't really like him either."


Previous to that we looked at a gixxer. Guy wanted 3400.oo . I offered 3 grand,told him cash today. He said, "Well I guess the balls in your court."

I said..."No dummy,you have bike. I want to buy bike. I make offer,then you decide." He says..."Oh,I guess I'll have to think about it." Nice work Sherlock.

My nephew is alot more tollerant than me...he couldn't do it.

Registered
Ive owned a 98 CBR 900RR and it was an awesome bike that I still regret to this day getting rid of it. Its not Busa but coming from riding only choppers I'm sure it will be more than enough for him to handle for quite some time. Make sure you warn him about them Fireblades........... The 98 and 99RR were wheelie machines!!! The front ends on them come up effortlessly

#1busa said:
Ive owned a 98 CBR 900RR and it was an awesome bike that I still regret to this day getting rid of it. Its not Busa but coming from riding only choppers I'm sure it will be more than enough for him to handle for quite some time. Make sure you warn him about them Fireblades........... The 98 and 99RR were wheelie machines!!! The front ends on them come up effortlessly

I believe he felt that yesterday #1. He's has been given lots of advice. He's actually being very cool.When you tell people about a nephew or neice,they automatically think of someone who is like 17 years old...or younger. I come from a family of good Irish Catholics...you know,every sperm is sacred.

There is a huge age gap between brothers and sisters,he is actually 34. We both WASTED alot of years building/riding our own choppers before jumping into the sportbike pool. Today it gets a new front tire...so this will slow him down again.

He's a good technical rider and started to surpass me riding GasGas Trials bikes. We've always had a little friendly competition going,we usually end up on about the same bike,reguardless of the style. He's been my son,brother,best friend since 1993 when his Dad/my brother died.

I'm guessing by next season...matching Busa's.

RSD.
You must log in or register to reply here.

Helped my buddy find a starter bike for his son...
2

B
Dad jus fell scratched up his busa bad any advice?

Rubb once again attempts to reach into...