Sig Sauer MPX-C...Must have one!

Donating Member
Registered
This is what my next toy will be when I have saved up enough pennies!

Registered
If only i wasn't living in a chamber of rules and an over-regulated dumbass country I would be in the store at first light with mr B.Franklin in my hands begging for it like Oliver moderfukin Twist.

Donating Member
Registered
Sous you going to buy a semi auto only version?
Any new mg made after 86 you or I cannot own.
Anyway I'd still take an Mp5. Tried and true.

Blanca Busa said:
Sous you going to buy a semi auto only version?
Any new mg made after 86 you or I cannot own.
Anyway I'd still take an Mp5. Tried and true.
Click to expand...

I've been lucky enough to have the opportunity to run a few hundred rounds through a few MP5s. They are proven but I think there are better options out there. While I am a fan of the 9mm in a handgun, I think it is severely limited in a carbine round (I guess in this case a sub round). I really like AAC's 300BLK proposed MP5 replacement, the Honey Badger.

I'm running a 12.5" version and it is hands down the best carbine I have had the opportunity to run. I'd really like to get a 9" upper now. Or maybe a complete custom 10" SCAR in 300BLK. Would be pricey though.

Donating Member
Registered
Professor years ago when I worked at the indoor range it was one of a few places the FBI would come to train.
They did this because they could plan the event weeks in advance and not worry about getting rained out.
A couple of them brought over two Mp5/10s. After watching me drool on the observation window for a couple hours one of them waved me out and gave me a couple mags. That was the single most awesome gun I've ever fired.
Choice of one sub gun and it would be that, an Mp5 in 10mm.
I do agree that .300blkout cartridge is starting to take hold. I'm holding out till I see cases of it being sold at fair prices before I invest in the caliber though. It could fade out as several others have. But it's def got the range over any other caliber in its class. An mp5/.300 with a 0-300 meter range would be a great all around weapon.

Donating Member
Registered
Professor that was an excellent link.

Staff member
Administrator
Registered
I was able to run a couple of magazines through a MP5/40. It was a Demo and HK was footing the bill for the ammo, so that made it even better.

They had a MP5/10 there but I didn’t get a chance to run it. I owned a HK94 that I was going to have Curtis Higgins (S&H) convert, but my interests went other ways and I swapped it.

The .300BLK has been around at least 20 years although under other names, 300 whisper, 300/221, 300 fireball, etc. It was really great when AAC and Remington decided to develop it as SAAMI cartridge a few years ago, so I don't think it is going anywhere now. Factory ammo is still a bit pricey, but cheap to reload. It will never be as cheap as 5.56 though.
I think a HK 300 would lose some its appeal compared to a MP5 because it would have to be based on a 33/53/93 design instead of a 94. The HK 51s and 53s just don’t have the visual appeal of the MP5.

Donating Member
Registered
And now you wish you had that 94 done by Curtiss. Thang would buy you a new car now!

Donating Member
Registered
Have you seen one of these? Almost have to get one just for the cool factor.

Blanca Busa said:
Have you seen one of these? Almost have to get one just for the cool factor.

How about this one? 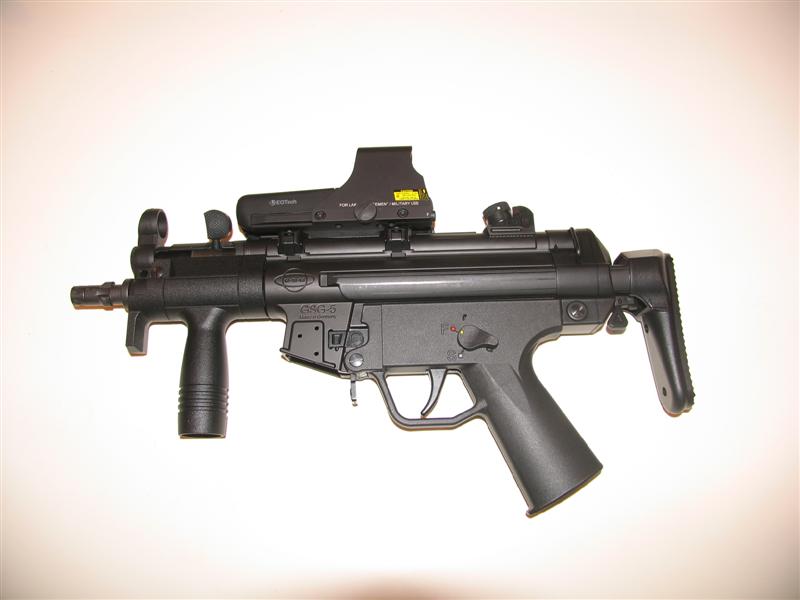 Registered
Oh the joy of YouTube. One video, then another, and suddenly you arrive at this.

Blanca Busa said:
Sous you going to buy a semi auto only version?
Any new mg made after 86 you or I cannot own.
Anyway I'd still take an Mp5. Tried and true.
Click to expand...

I don't mind the semi-auto only, I get to play with enough weapons while on full auto at work. This is what I have been looking for I think. Going to do more research before making up my mind, but I am about 90% on this being the right AR for me.
You must log in or register to reply here.