Registered
Its been a few years, so many of you prolly don't know me...and those that did prolly forgot! lol Some may remember me attempting to ride a stk wheelbase Busa down the 1/4mi w/o falling off? Don't get to the track much at all these days. Don't know if would be able to hold on now...

I was pretty active on the Busa boards from 2000 on up to prolly 2005 or so. Owned a Red/Gray 00 Busa and then a 04 LE. Got rid of the last bike to buy a house. Played around with some old skool bikes for a few years but everything i messed with ended up being at the track more than the street. Tried to update the bikes with some newer tech but everything always fell short of the Busa to me.
A couple of years ago my lil 8 year old daughter(at the time) had some health issues and that focused my attention on her and my family and away from bikes and such. After a year plus of ups and downs my lil girl quite having issues and has been doing great for the past year or so.(PHEW!)
I enjoyed spending more time with my family and decided i did'nt wanna mess with working on my junk all the time. Sold it all and just bought another Busa....WHOOHOOO!!!
Its a 03. Has a few miles on it(26K) and some "bling"(i'm not much for chrome). It does have a Brock Street meg exhaust, PCIIIR, small air box mod, pair valve blocked off, aftermarket under tail(think its Hotbodies), lowering links, billet lowering upper tripple, speedo healer, braided ss brake and clutch lines and prolly a few other bits. Nothing special. Needed the valves adjusted when i got it and now that i've done that, it runs much better.
I'm not the "bling" type, so i'm gonna get rid of a few things(undertail, billet lowering triple) and replace with the stock stuff.

Anyway, i just wanted to say "HEY" and thank you all for keeping the site going! AND allowing long lost members a place to return to! 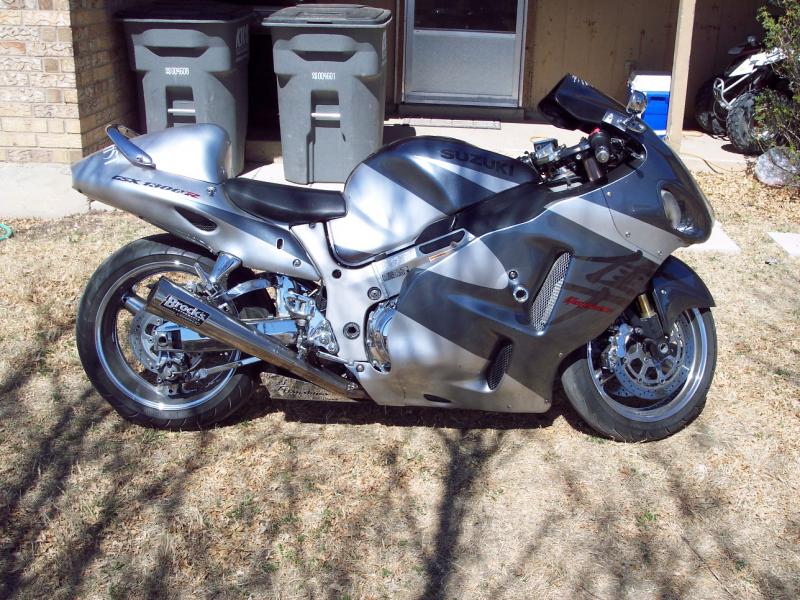 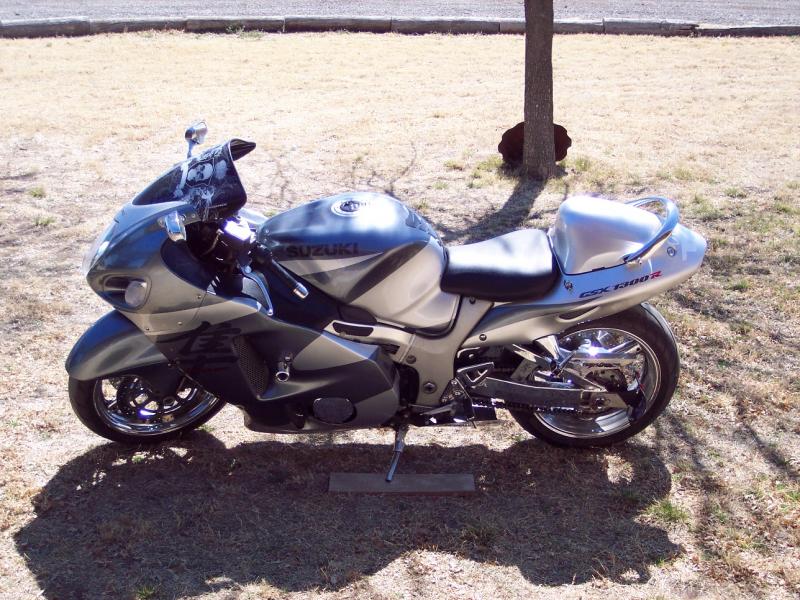 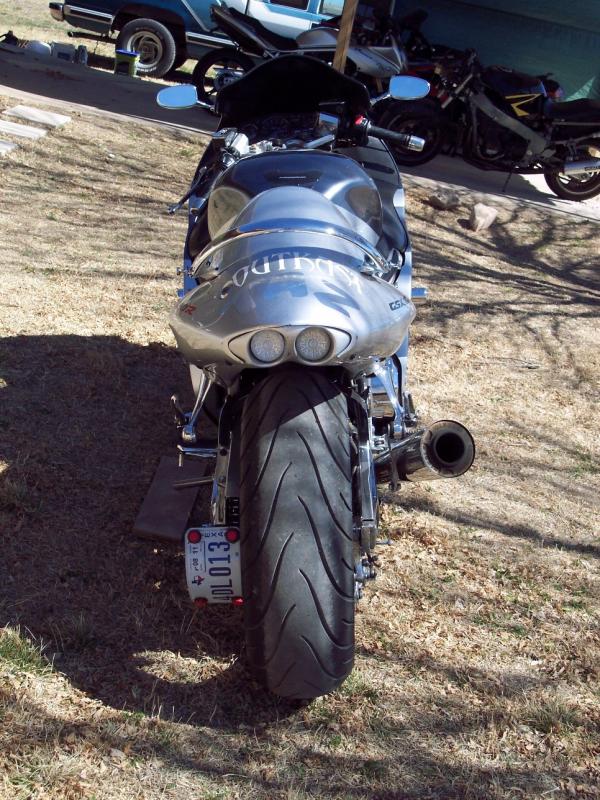 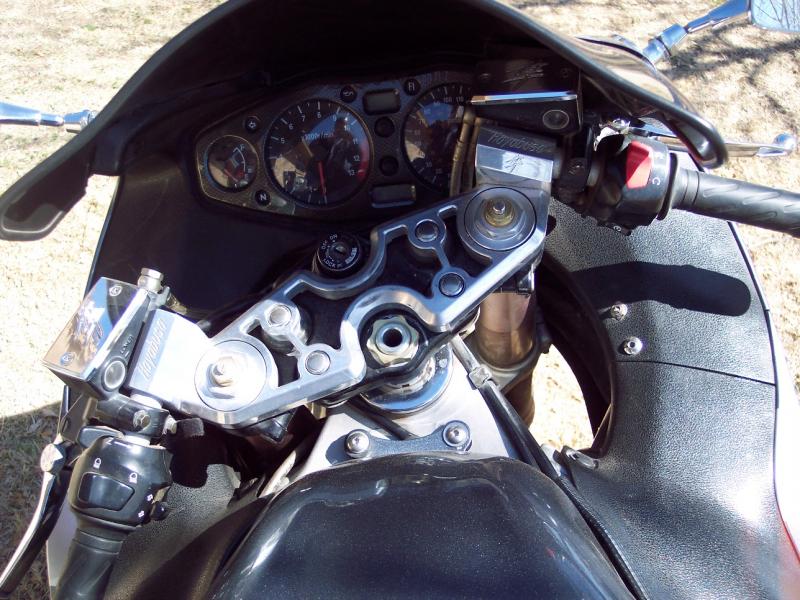 Registered
BTW, those pics are of the bike the day i bought it(two weeks ago today). I've removed the stickers on the back and got rid of the skull shield and itty-bitty chrome mirrors in favor of stock pieces.

Registered
nice looking bike you got if you wanna get rid of the under tail i might be interested. welcome back

Registered
Welcome back! It seems you had a challenging period of your life. Hopefully, it will get easier.

Registered
Welcome back if mitch decides not to buy the under tail. Pm me
Posted via Mobile Device

IG. said:
Welcome back! It seems you had a challenging period of your life. Hopefully, it will get easier.
Click to expand...

Registered
Thanks for the welcome guys!

PM me about things off-topic. Don't wanna muck the thread up.

Registered
Yeah, its been tough for a bit. My lil girl(she is very petite) is prolly the toughest kid i know. Ended up having a deformed gall-bladder(was working but just barely). The worst part was that it took 6mo's of tests/poking/proding and major pain for them to figure it out! Then she had a bad reaction to the antibiotics post surgery. Had another WAAAY out in left field issue 8 months later and she got Mono at the same time! I'm still amazed at how she kept her amazingly happy attitude throughout the whole ordeal. She is doing great now!

Registered
welcome back to the site man....good to have ya...nice scooter.

Moderator
Donating Member
Registered
Glad you found your way back home but I know you're even happier that your girl is doing well. I pray that things continue to go well for her! Welcome back to the Busa world!

Registered
Welcome back man, I am glad to hear your daughter is recouping and yes it is always amazing how they still smile throughout the whole thing sometimes. My oldest put me threw the ringer once with a visit to the hospital, it is a day I will never forget and you will too use this one day as a reminder of how strong and wonderful your daughter is.

Registered
Im happy tat your little girl is doing fine,glad you made it back

You must log in or register to reply here.
Similar threads
Lost my key! How to find ignition cyl code for new key?
Lost Key
Have a slipper clutch, but lost all gears after quarter mile pass
Lost Keys
Lost a friend this week
Lost a brake light cover!!!
Top gun undertail turn signal wire lost.
Lost Somebody With Great Talent ~ Please Pray For Their Family & Friends *
Lost My Dog This Weekend....
Lost Another Sister Today.
Sunday With The Hayabusa Getting Lost .
gen 1 ECU flash lost by tuner (PC5)
We lost a good friend today - Pappy
So has doritos lost there minds? roulette doritos
Looks like I lost 5th gear!
lost my father this morning
Lost them both!
Almost lost the 9th life today!
Lost a friend
Lost our little friend Buddy today...
I Lost My Key...Help!
The world lost a great person today
Sad news, rider lost
another rider lost his life in world super sport race in moscow..
I lost something very "Near and dear" to me. A serious TRADGEDY. It's Gone.
Lost puppy :(
We lost an angel...
lost cowl
Me,Red,Mike,and Grapeape...lost.
Lost baffle screw...
key lost
Lost a rider over the weekend
Lost $600.00 planning a ride to Ruidoso NM rally
Lost Dog
confused and lost
I lost 35 lbs!
Harley washes ashore in Canada after being lost in Japanese Tsunami
lost another one
Lost a rider yesterday
which pcv mad do i use im kinda lost
Lost screws do not know where i can find bolts to buy
My girl lost my busa key :(
Lost my key . . .
Fall Bash Lost & Found
Lost to an 05 R1...
Clutch Leak? Lost Some Fluid from the System
Busa lost race to a CBR........
Lost 31 today, RIP brothers.....
Lost a local rider last night, Louisville, KY
lost and stuck on the lift
Share:
Facebook Twitter Pinterest