A momentary lapse of judgement...

Registered
A few months ago a friend of mine began hounding me to buy a Goldwing. He's wanted a Wing for years. Deal was, he'd buy one, if I did. I told him Wing's just aren't my "thing" but I offered to take a look at one at the dealership with him. I already own an '05 Busa and an '05 FJR, so the thought of owning a Wing didn't much appeal to me - although I have to admit, I'm a gadget-freak so I was curious about the beast.

In the dealership I sat on the mighty Wing. I hate to say it, but it didn't feel all that bad! If you ignored the giant bear of a rear end (keep your eyes glued forward), it felt fairly narrow, at least in the middle. The seat was amazingly comfortable! It's a frinkin' lazy-boy on wheels! And talk about bells and whistles! You could push buttons on this bike for 15 minutes and never push the same button twice!

I was "starting" to consider, or... uhhhh, or perhaps trying to justify the damn thing in my mind. Thinking, "Maybe for long, long, long trips when my wife wanted to ride along, perhaps?" At $21K, not cheap, but cost wasn't a main factor. Anyway, my buddy is standing there ready to buy (if I did). I decide to think about it awhile. Luckily I did.

About 2 weeks later my buddy shows up with a two year old "borrowed" Wing; a used one he's considering purchasing. He pulls into my driveway with it with a weird look on his face. He hopped off and said, "I'm not sure about this thing." The first thing I noticed... it was nearly as big as my wife's Toyota Prius!

After playing with the 'reverse' a bit (a must on this machine), off I go on the 2-wheel Civic. My first thought... this bike should come standard with "WIDE LOAD" stickers forward and aft. On the plus side, it was seriously comfortable, but that's the only good thing I can say about it. The handling was terrible, almost to the point where it was scary. With all those cc's and 6 cylinders I had to open it up to see what it had. Can you say "Gutless?" The power was depressing! It could probably do 140, but it would take a pretty good long time. Many times I'd be on my Busa and I look down at the speed-o and see I was going faster than I thought I was. It was just the opposite on the Wing. Looking down at the speed-o I was surprised to find it was going 10-15 mph "slower" than I thought I was. Yet even when cornering slow it still didn't feel sure-footed. Could I get used to it? Perhaps, but I think I'd rather go to the dentist.

I managed to get the beast back to my driveway without incident and was very happy to dismount it. My buddy asked me, "Does it handle as poorly as I think it does?" Me: "Yep! Three words for ya my friend... RUN FOREST RUN!"

Obviously the Wing is not in the same category as any Sport Bike, but I was hoping for just a little bit of decent handling. (My FJR is a bit on the tank'ish side too, but it handles fairly well.)

Bottom line. It was great to be able to test drive a Wing, without having to buy one. I realize now I never want to own one. And neither does my buddy. Ah... I'm back on my Busa and happy!

Donating Member
Registered
I always wondered how those things handled. Now I know.... Figured as much.

Registered
I was curious as well, thanks for the input.

However, I wonder how that guy on the gold GW at deals gap does it. He is very capapable rider but doesn't seemed too handicaped by the wing he rides. Hmmm.

Donating Member
Registered
i always figured they would handle slow... but resonably well.

can't have everything all at once i guess.

Registered
I'm still contemplating getting one for long touring trips. It's going to be at least 10 years before I add one to the harem though. I always laughed at the old guys on the Wings until I did a 600 mile day on a hard as a board bar-hopper saddle on my Magna. That night in the hotel as I was trying to find a way to lay down without wanting to cry the concept of "touring bike" finally became clear to me.

Donating Member
Registered
I remember when I was 18, a friend of my dads had a Goldwing and that guy could ride. You would swear he was going to scrape all that pretty chrome and plastic right off that bike, but he would shame kids on sportsbikes with that thing.

Donating Member
My thoughts exactly after riding one myself

Donating Member
Registered
Great report and thanks for the laughs, FJ. I had an '03 FJR that collected dust after I bought the Busa, so away it went. I always thought I'd buy another FJR or a 'Wing eventually, and after reading your post, I'll make sure and ride one first

Donating Member
Registered
stupid is as stupid does..and thats all i have to say about that

Donating Member
Registered
With an FJR in the stable, why would you consider a wing?

Why was I considering a Wing when I have a FJR in the stable? The FJR is a "fairly comfortable" bike (with stock seat), but not overly so. After 150-200 miles I'm ready to get off the thing and take a break. I started thinking "maybe" a Wing might handle similar to my FJR, and be more comfortable. I was sure wrong about that!

Since I bought my Busa my FJR tends to collect dust, but on occasion the FJR is nice to ride - especially if my wife wants to hop on the back, or I need to transport a piano.

I've seen video of riders tearing up the curves on a Wing. Assuming it's not trick-photography, I can only make two assumptions;

1. These people are VERY, VERY talented riders, and/or

2. It's a safe bet these riders also enjoy racing motorhomes!

I don't think I will ever be that old

I don't think I will ever be that old

Reference the comment; Growing old enough to ride a Wing.  It's probably not a matter of age, but rather a mindset.  If long distance easy-chair riding comfort is your only goal, buy a Wing.

Registered
I bought a 2005 Wing, kept it for a year, then sold it and bought the Busa.

We all have opinions about everything, but trying to compare a Wing to anything other than a Road King, Ultra Classic, BMW K1200LT or any other bike in that class is a waste of time. You can not compare a wing to an FJR. They are two significantly different bikes.

My opinion of the wing is this...

The Wing was very heavy, but handled extremely well for its size and weight. It was not built for speed. It was built for long distance cruising. It was built for two up comfort. Reverse was a gods send. I loved it. However, wind protection was not so great. For a bike this large, I would have thought it would have been better. No matter what I did, the buffeting behind the wind shield was a problem. That is the main reason I sold it.

Too many times, when I had the wing, people tried to compare it to a sport bike. You can't. Just like you really shouldn't compare the Busa to a full sport bike. A Busa is better compared to a CBR1100XX or the ZX-14.

Donating Member
Registered
Why not go for a H-D Road King Custom? 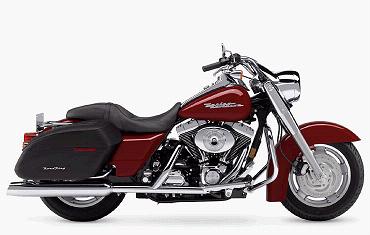 E
To wing or not to wing?

Oct 22, 2003
STUNNAH
S
Anyone looking at getting the redesigned Goldwing
2

Mar 28, 2004
BulletTrain
Tested out the Tiger Racing under belly wing at high Speed