Registered
I recently purchased a Free Street Design undertail and want to relocate my tag to the swingarm underneath the front seat. Does anyone have any info. on how to accomplish this? I did a search and could find nothing.

This is what I'm looking for:
http://www.streetfightersbydesign.com/images/busa5.jpg

Administrator
Registered
Sorry I can't help but Welcome to the board. Someone here will help you soon.
Jim
S

Registered
Thanks for the warm welcome, Jim.
S

Registered
Jim, I see you live near me. I just moved to the Lake Lanier area in Sugar Hill. Other than the N. Ga. mountains, where should I go to find some twisties with long, fast sweepers mixed in for good measure?

(skyfroggy @ Mar. 18 2003 said:
Jim, I see you live near me.  I just moved to the Lake Lanier area in Sugar Hill.  Other than the N. Ga. mountains, where should I go to find some twisties with long, fast sweepers mixed in for good measure?
Click to expand...

Welcome to the neighborhood. I didn't even see that. I hate to say it but I can't think of any off hand. I really haven't done much exploring around the area. Buford Dam RD can be fun just to cruse by the lake. Other than that sorry. Once I can get back on my bike we'll have to go find something. To make it short I had surgery on my leg and can't ride for about another month. I find out next week if I can put weight back on my leg.
B

The list is pretty long.  You're not far from the North Ga. mountains, western north carolina, and eastern tennessee.  In Georgia, try Hwy 60, Hwy 19 to Hwy 129, Hwy 180 from suches to Hwy 129, Hwy 180 to Alt 75, Richard Russell Pkwy in either direction, Alt 75 to 180 from Helen, 197 to Clayton in either direction, Warwoman road out of Clayton, Hwy 28 from highlands, nc. to Deals Gap, Deals Gap (the Dragon),  Cherohala Skyway, Cherokee Foothills pkwy, and the BlueRidge pkwy.  That should get you started.
S

...And thanks a lot Ben. That's an awful lot to remember. I'll have to write those down. I'm sure I've been on some of them while exploring around Suches, but I'm not sure which.

Perhaps you, Jim, and myself should meet sometime (when Jim is healed, of course) and go ride some of those roads.

Go here for a great book that shows roads all around the area.
extreme_twisties
S

Registered
I'll be glad to be your tourguide one Saturday or Sunday if you'd like.  I try to get up to the mountains at least once a month.  It'd be more often, but it's 90 miles for me just to hit Dahlonega where all the good stuff starts.  Just send me mail sometime if you've got a weekend day available, or better yet, just post it under the Geographic board and we can get some other riders to go as well.

Also, take a look at georgiasportbikes.com.  A lot of those guys ride the mountains everyweekend.  If they're not in the mountains, they also do trackdays.  A lot of good guys and gals, nice people.

(busaben @ Mar. 18 2003 said:
Also, take a look at georgiasportbikes.com.  A lot of those guys ride the mountains everyweekend.  If they're not in the mountains, they also do trackdays.  A lot of good guys and gals, nice people.
Click to expand...

They're having problems with their site and set up another site for now.Georgia sportbike
S

Registered
Great!
I'll take you up on that sometime Ben.
I

Registered
Here is what one member did. 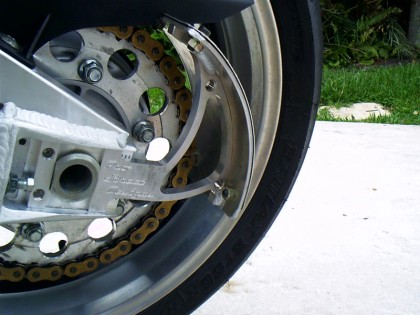 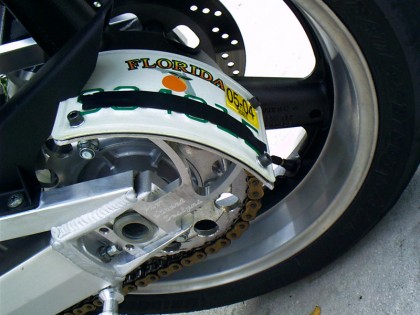 Registered
I did mine myself with just a few simple items. First of all I took my existing license plate holder and relocated it up underneathe the undertail. You need to take off your front seat then take off the rubber band holding down the computer box. This is where I marked where to drill by using the existing holes on the bracket as my spacer for where to drill. Then just mount it on the underneath side using the existing nuts and bolts(the computer box will still lay flat even with the bolts sticking up). Then I took to hose clamps(not like the ones you would use on a radiator hose, these had rubber proctectors around them with one hole at each end)which you can probably get at any hardware store for a few bucks. I just took off the rubber proctectors(no need for them)and bent the clamp out straight. These are easy to bend but plenty strong enough to hold the plate. I then used the wing nuts to mount the hose clamps to the lic plate bracket plus you can slide them left and right for the correct width of your plate. Last but not least I mounted the plate to the clamps by using the existing holes in the clamps with the reflector bolts and wing nuts. I would put a little super glue or locktight on all nuts and bolts for the vibration. I will post some pics for you so you can see the end product. If your not sure of the type of hose clamps just email me and I send a pic of those.

Registered
Here is the finished product, I also moved my light back there which is not shown in this pic. 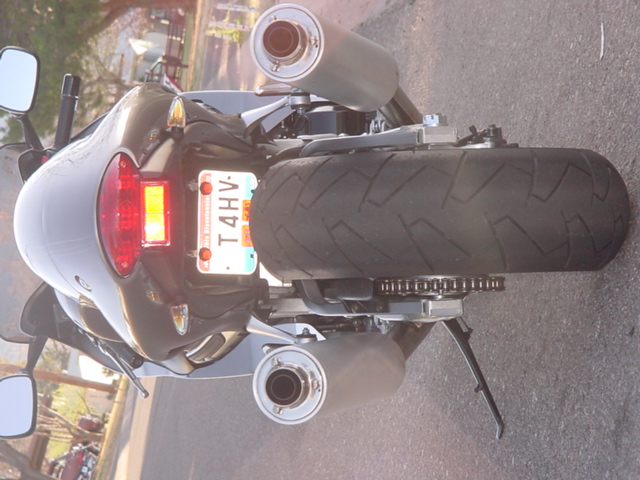 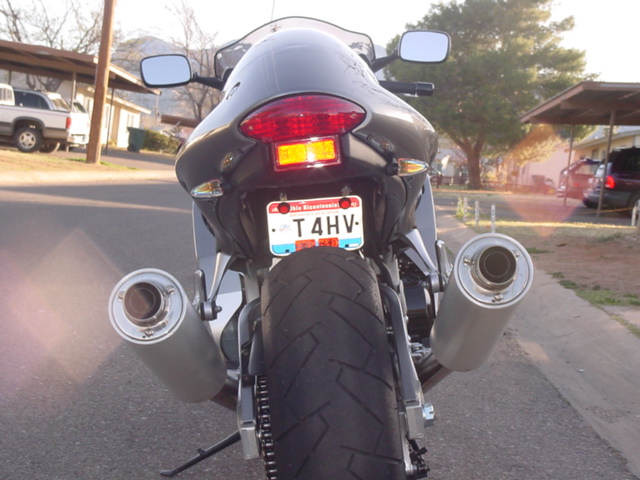 Registered
now that we're back on the topic...
I used a piece of angled aluminum and it worked great.
2

Where can I get one of these?
I

Registered
Im searching my emails for the guy that makes em. Sorry for the delay. The pic was on my desktop so now I have to find the email it came with.