Registered
Looking for worthwhile trips.  Has anyone been to "the dragon".  The web site looks interesting, 318 curves in 11 miles.

However, is it worth dedicating a 5 hour ride just to experience it's thrills?  Chris

Donating Member
Registered
Hell yeah !!!!!!!! Go for the thrill and braggn rights if you survived the Dragon bite. It took me about 5 hr to get there from Col,OH . I just took a weekend trip by myself,stay in Knoxville which is only 45 min away from the beginning of the tail on the Tn. side using route 129.
M

Donating Member
Registered
If I was within 5 hours I'd be there with bells on, sounds like the ultimate rush.

Registered
Been there, done that, got the t-shirt.
Would I make a special trip to go back,
Naw. BUT, It WAS an experience! 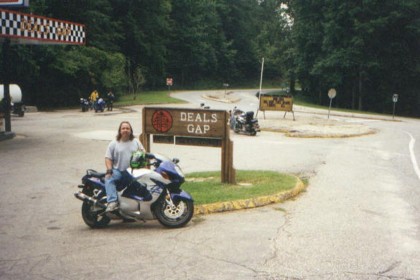 Donating Member
Registered
NCBusa2001,
I'm in Raleigh and after looking at the site, it looks like fun. I couldn't handle a 5 hour ride (need to work up to it), but if you're interested in doing it later this summer, give me a holler.
D

Registered
NCBUSA I've tamed the dragon several times. And its one ride that you'll never forget...no matter how hard you try you can never remeber when the curves are coming next.

Juggler I'm in durham ... busahead is in Raleigh also..perhaps all of us in the area need to get together and plan a trip to the Dragon ...once my bike is out of the shop...... looks like I'm gonna be down for 10 days to two weeks.. I pray it aint that long

Registered
I got the shirt... And, I am ready to rock-and-roll.

My buddies too. We have a 3 bike trailer... So, we will prolly drive down in a cage. But, I am definitely in for a trek.
B

Registered
The ride is more than worth it. However, don't limit yourself to just the "Dragon". Hwy 28 from Deals Gap to South Carolina is also one heck of a road and it starts at eastern end of Deals Gap, right at Crossroads of Time store. Then there's the Cherohala Skyway, which has some breathtaking scenery and some great sweepers, perfect for the 'busa and it starts less then 5 miles from the eastern side of Deal's Gap entrance as well. The Blueridge Parkway is also about an hours drive from Deal's. You could spend two weeks in the area if you hit all the twisties that are nearby. Don't get me started, you are only an hour away from the twisties in North Ga also. It's almost sensory overload if you're a twistie fan.
Z

Registered
I live in Cincinnati which is about a 4.5 hour trip for me. Well worth the time to go down over the weekend. you do feel the weight of the busa in comparison to the flickable 600's that you'll see by the dozens. 3 step process. 1. Red line in 2nd gear 2. Smoke that front brake and then 3. Hang off and countersteer for all you're worth. 318 times. Just be careful as some of the locals are very, very good and you can fixate on them if you find yourself in a line going through.
The Fontana Dam area has a fantastic hotel 15 minutes from the Tail end of the Dragon. You'll just have to experience it for yourself! Todd in Cincy.

Donating Member
Registered
Well said Zero ,I almost fell into that fixated tunnel when trailing behind two locals I met up with @ the bottom of the Tail on the Tn. side . They gave me the scoop on 5.0 and what turns to look out for . Trying to hang with these local boyz almost cost me my bike (ova da side of the MT) . Well that woke my azz up real quick so instead of trying to stay up with the crew I was happy with just keeping them insight . That only lasted for few minutes and there I was again like bammgetting back down on her like a local lunny. I SURVIVED THE DRAGON ,got a sweat shirt,t-shirt and key chain.

Registered
When I lived in Charlotte NC I was there every couple of weeks. Now I'm in Miami FL and only make it there once a year. At least I can ride 12 months a year though. The dragon is killer

and a constant challenge. Great ride.

Registered
Impressive is an understatement..... the canter on some of those corners as well as how tight and frequent they come up is mind boggling at best....imho
P

Registered
I had a blast when I went to the dragon a few weeks ago. I only rode the dragon because I was having so much fun. My wife put it best, it is basically an amusement park for sportbikes. Well worth the trip. If everybody wants to get a ride together let me know, I'd be in.

Administrator
Registered
Been there done that and want to go back. As a matter of fact I think a few guys from work and myself will be going later next month. It's a blast

Registered
Thanks for the imput. Juggler and Dezzy, I'm planning on taking some time off work the week of June 22. I'd love to get a rider together. It sounds great.

I guess camp or hotel is the real question. Drop me a line at NCBusa 2001@yahoo.com if your interested in going. Chris
C

Registered
I go twice a year to the gap, or that area, ya gota try it once! but the busa likes HWY 28 and the skyway better, lot more speed involved on those roads nice sweepers that let you use some of that busa power.
Here's the tree of shame that DEZZY's talken about. 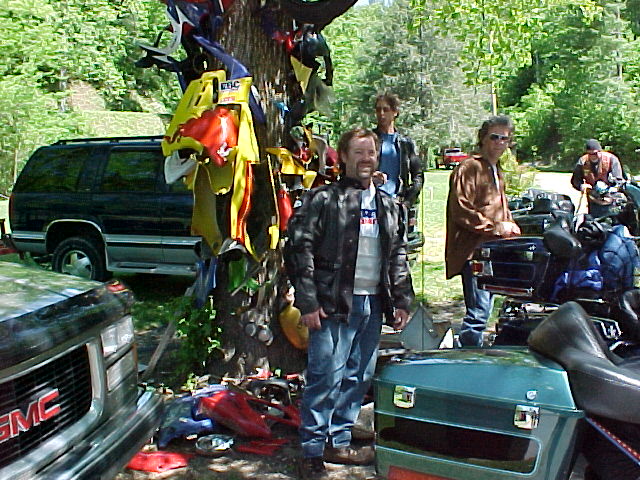 Registered
Here's me at the dam on 28 which is just south of Deals gap. 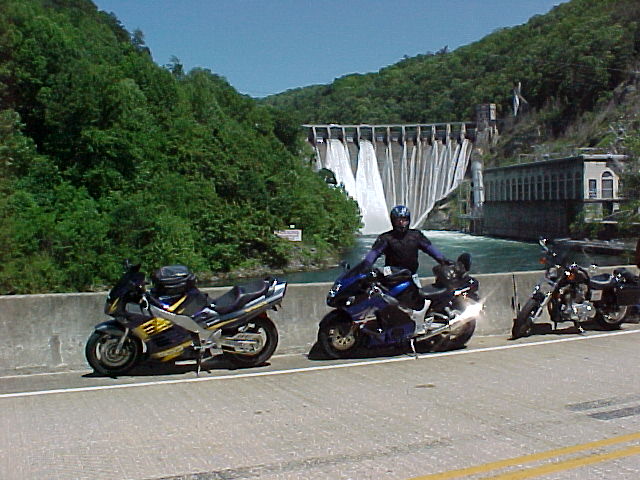 Donating Member
Registered
deals gap is the only time in my entire riding life that I ever thought.. "hmm.. kinda be nice to see a little straight patch after this next curve!" haha.. it will keep you on your toes.

Be careful.. have fun if you go. I know i'll be going back soon. 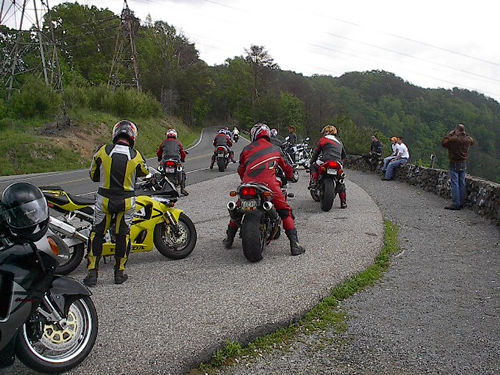 Tail of the dragon
2

new Tales of the Draggin