Registered
I installed the Brembo clutch MC (RCS 16) and I was wonder what the verdict was on using a Vortex hydraulic switch rather than a micro switch. I understand the Hydraulic switch was throwing FI warning lights for some reason. Was there a verdict on this? Searched but didn't find a final verdict on whether or not the hydraulic switch works.

I can't find the right micro switch for the RCS 16 clutch MC. On my third order trying to find one that fits.

Donating Member
Registered
Hit up GIXERHP, I believe he had a solution before his bike was stolen. That's the reason why I took off my brembo clutch master.

Registered
I shot him a PM. Did you use the vortex hydraulic switch on yours?

Registered
I never heard of this problem and I have been running a hydraulic switch on my brembo MC for a few thousand miles. Not sure what the switch brand is though.

Registered
I have a spare if your in need of one. I believe it came from EMA-USA or GPTechllc.

Registered
Gixerhp sold me his. Haven't tried it yet though.

Staff member
Administrator
Registered
I am thinking of doing the clutch side since I already have the brake master and calipers. I had heard about the switches causing problems... thanks for doing the work for us!

Registered
So got a minute and worked on the Brembo Clutch MC. The switch seems to work as I did not get the F1 errors (yet anyway). Just for grins I put the vortex hydraulic switch in and sure enough I got an error light. Apparently the pressure switch tells the ECU that the clutch is fully in too soon, causing the conflicting information to go to the ECU, which it reads as an F1 error. The switch I got from GIXERHP only signals the clutch is pulled if it is fully in; assuming you have it properly adjusted. Getting things set properly took me 3-4 hours because you have to adjust, ride, adjust, ride.

I pot a rubber cap on the actuation pin that you attach to the lever. This gives a softer contact than the steel pin and will hopefully help hold the adjustment longer. I feel this will be something that requires checking and maybe adjustment all the time. I added this wrench to my road kit. This is a fairly difficult mod. Here is the run down:

1. Take the lever off of the Brembo MC. This involves unscrewing the nut on the MC and then using a hex drive to remove the shaft that holds the lever in place. Once done the level comes off with a little muscle.

2. Remove the MC plunger from the lever. Careful as there are small parts and springs that may pop out at you. I did this in a bucket so everything is caught and doesn't fly all over the garage. This takes some muscle as the lever does not just slide apart.

3. Now you have to drill a hole in the lever as directed in the instructions. The lever is super soft aluminum so drilling is easy, but this is best done with a drill press. I used a micrometer to locate it, but it is actually not that critical as the switch can be adjusted. Also, wrap some tape around the bit so you don't drill too deep.

4. Now tape the hole with an M4 tap. The directions do not give a thread pitch so I used 1.0, which worked.

5. Install the actuator pin in the hole you just made in the lever using white thread lock and put the lever assembly back together. I put a rubber vacuum line cap on it too.

6. Put the MC back together, putting the ewitch bracket on the side of the MC with the nut on the lever shaft (edit: I used blue thread lock on this).

That's pretty much it. Put the MC on the bike and hook everything up. I used the connectors in the kit, which meant cutting and soldering the stock wires (edit: Apparently there is no polarity on this circuit). Remember to bleed the top at the MC as well as at the clutch actuator. Now put the bike in gear and pull the clutch in to be sure it is releasing the transmission. Look at the lever and remember the position ( mine was all the way to the grip). Adjust the switch position so the post on the lever is actuating it at the full in lever point. That should do it. Note that you can adjust the RCS MC. Mine seemed to work best with the screw at halfway between 16 and 18 (1/4 turn off 90 degrees toward 18). Edit: Changing the MC settings may require readjusting the switch position.
G

Donating Member
Registered
Very cool , glad it work out for you.
Too bad no one here makes it and i has to be bought from Germany!

Registered
Thanks for your assist Gixerhp!

Registered
Here is the image I was trying to upload with the post on the install.

I know this is an older thread. But I have bought a set of Brembo Master Cylinders, both brake and clutch, and can't find anything on this clutch switch issue. You said that you have run a hydraulic switch. If you don't mind me asking, which one are you using. I have upgraded the rearsets with Vortex units and used a Spiegler brake light switch in the rear master cylinder with no issues. Will the same unit work upfront as the clutch banjo bolt replacement? Or is there a particular unit to use that works without the FI light coming on? Many people have different answers and different outcomes. But nobody has answered firmly with a setup that works 100%. Please help me out!!

Registered
I used a vortex hydraulic switch and that causes F1 errors. You need a micro switch which is what the above is describing. I believe the hydraulic switches are too slow and that messes with the ECU. PM 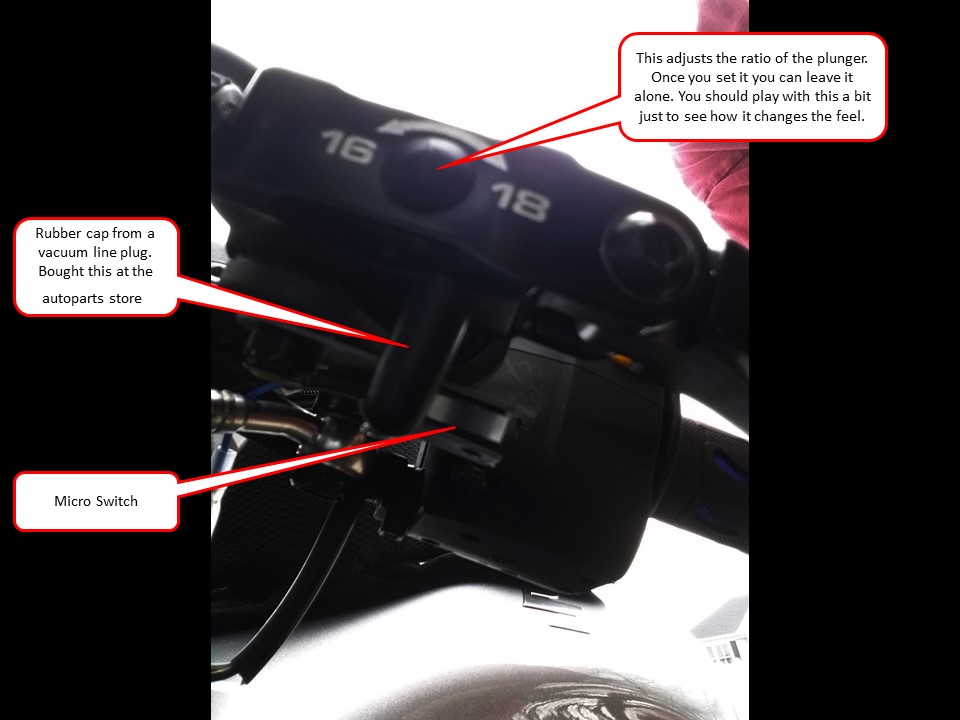 GIXERHP, he is the one who solved this issue and helped me.
5

fallenarch said:
I used a vortex hydraulic switch and that causes F1 errors. You need a micro switch which is what the above is describing. I believe the hydraulic switches are too slow and that messes with the ECU. PMView attachment 1579100 GIXERHP, he is the one who solved this issue and helped me.
Click to expand...

Thanks for the help! I see what your saying now. I couldn't make out much on the pic before! I have also found the Kroken item and think I can right up something similar on the cheap.
You must log in or register to reply here.
Share:
Facebook Twitter Pinterest