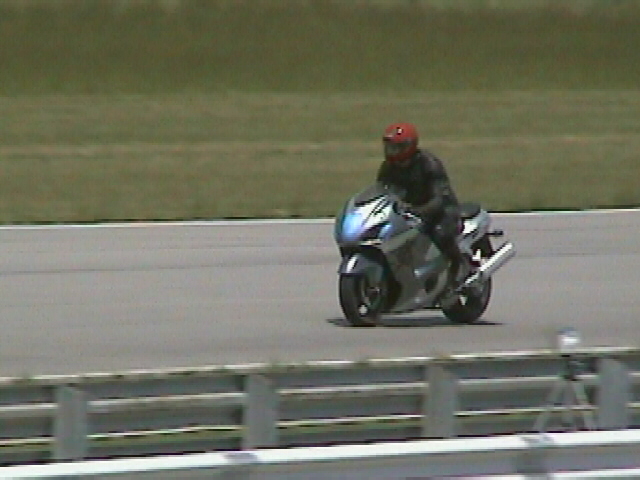 Donating Member
Registered
catch'em on the straits, lost me in the corners... 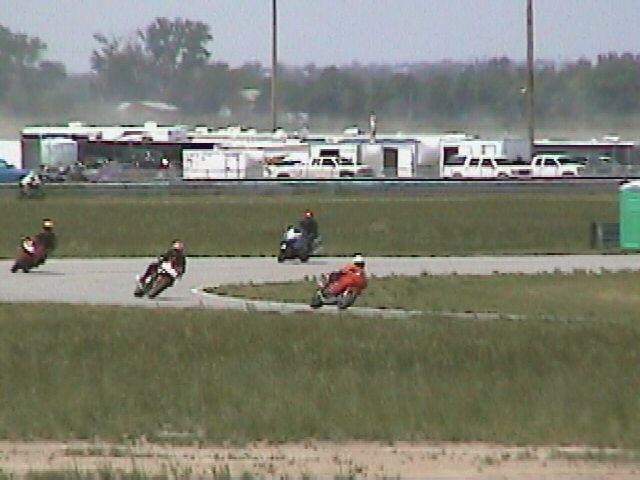 Donating Member
Registered
Wow, that's cool. What exactly did you do? Take a course? I live in Minnesota and would love to take some kind of racing course to help me work the bike. At least to know it's capabilities.

Donating Member
Registered
is there a limit to number of pics I should put up?? 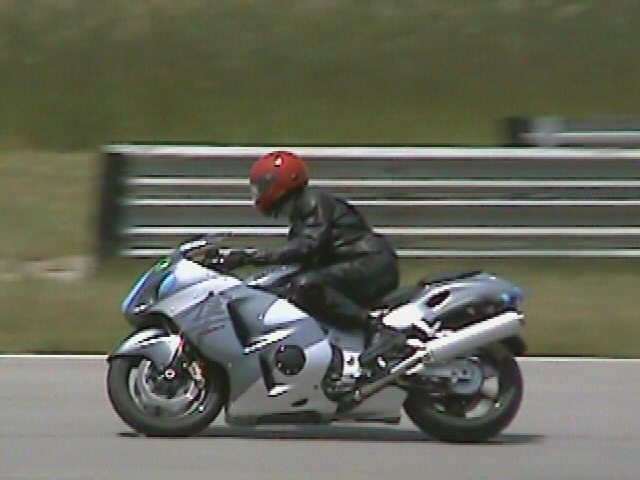 Donating Member
Registered
... me running BLOCK in the lead around a corner.... and.... 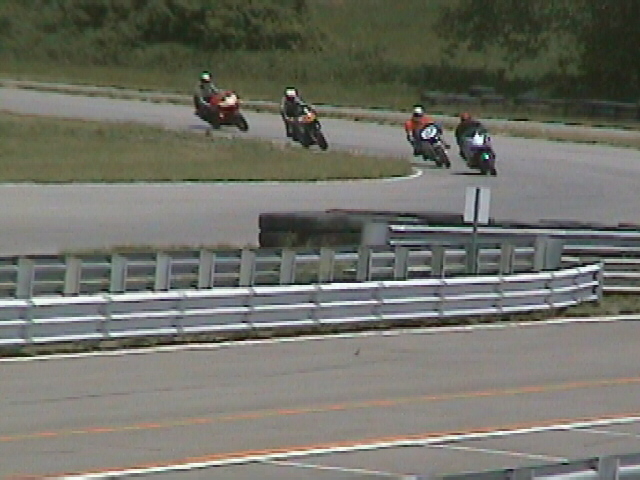 Donating Member
Registered
....me getting whooped coming out of the curve. Donating Member
Registered
Here's a pic of the track. Not very Busa friendly in my eyes - lots of tight turns. When will they make a huge SUPER track for Busa's and 12R's with higer speeds???

Anyhow, here's my lowdown: Got two free 20 minutes sessions on the track from NESBA.com for newbies. Due to wind, I got there way late and missed everything. Figuring I would show up and just watch and video anyway, they told me to tech up, suit up and ride with the BEGINNERS instead of INTROs. [gulp!] I've never been on a real track before. Okay, I was nevous... there I said it. But once on that first strait, I was in HEAVEN. Few things are that fun. The big sweeping curve in the middle was great but gave me the most problems. First session, I scraped my tow on the pavement and scared the crap outta my self. Note to self: pack extra pair of underwear next time. I've never peg-scrapped ever. This slowed me a little. I rode behind a "control rider" with a 'follow me' sign on his back. I got passed in the strait by the group but that was fine [and cool too!]. On the final lap, my leader took off and was G-O-N-E!!! I was so alone! But that part was fun.

The second session, again on my terror-curve, I had hit it hard catching the group in front of me, and while breaking for the curve, SOMEHOW [maybe cuz I suck] I had the throttle still up too! I was thinking very fast "Breaking - bike should be slowing - bike NOT slowing - bad, BAD bike!" I figured it out and turned way wide [either that or ride into the grass at speed] and everyone passed me on the inside and I earned another control rider guy showing me the proper line.

I rode my baby harder, faster than I ever will be able to on the street. It just flat out rocked. I felt safer, saw more col bike action - people 20 feet in front of you doing 140 on a track... it's just like the video game but you know it's REAL.

Stock Busa on the track. Keep in mind, I'm a total n00b. But Busa is big and heavy and not really tailored to THIS particular track. I am positive an experienced rider could rock the lanes with a busa, but there's a reason everyone else there had stipped down R1s, R6s, GSX1k and 600, 750's they're small, fast, and turn REAL good. I'd recommend a track day to everyone with a busa, but warn that it coudl EASILY be addictive!! ...and expensive for your average guy... in 40 minutes total, I had to have removed a couple months worth of tread.

Sorry for the crappy images, it's stills from a vid cam - not exactly on the bleeding edge there.

REV: The big 'N' sticker is for NESBA, they slapped it on when I got there. Then they stuck on the tiny white "INTRO" embarassment tag.

No, it was a great group and everyone respected me. Great fun watching the Advanced riders go at it!

LAZER: That's why I went too. I learned alot about the limits... er... lack of limits of the Busa motor. The NESBA free intro thing was GREAT!! Other wise it's like $200 a day and I'd be gettign spanked by EVERYONE else on the track Yer a freakin hero , you came home without rash on yer bike or yer leathers . right on man .

Donating Member
Registered
I was determined to NOT dump my new toy. RSD, you should find a track near you and check into the NESBA free deal. It is great. It's really cool pushing beyond your street limits on a real track.

Lazer, let me know if you wanna do some course or something. I can come up north for whatever. I love traveling on a bike.

I wonder if the KC Speedway ever has cycle days? I'd love to do that and REALLY open her up

Donating Member
Registered
a track on the north end of the island did a track day thang last summer . I just couldnt see it bein' worth it . 5 hours in the saddle to ride a cruddy trak that would take 20 seconds to get around . Sometimes , life on the rock sucks .
Monster S F....are there any tracks near you ?

??? Also did they let you race with anti-freeze or did you have to go through the whole process of drilling and wiring your bolts,water wetter etc. The reason I ask cuz u said that you just showed up Blah blah blah ;but I notice u did tape up your lights. Therez a dude ova @www.suzukihayabusa.org name Kirk that just got his novice class license that races his Busa stop on ova there and check him (cool brotha) out. I'll post a few photoz of him later.

Donating Member
Registered
Herez kirk getting his ROLL ON 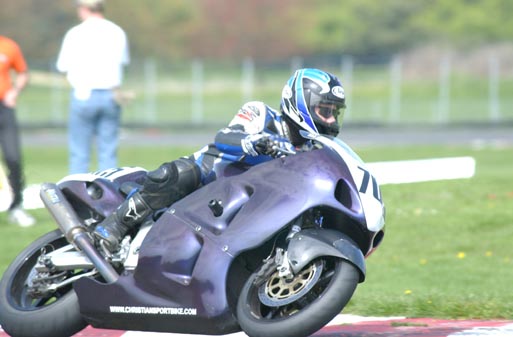 Donating Member
Registered
Yeah, man, I did that TOTALLY FREE! Except for food, gas to get there [rode 2 hours 1 way] and well, that's it. The NESBA riders manual covers the details, but here's the quick poop: INTRO riders skip a few of the real requirements like water only, wired bolts etc. but you gotta do the basics: tape over breakables, remove mirrors, have enough tread, get the bike TECH inspected, have a protective jacket, 'gauntlet' gloves, helmet, boots, 2 pair of jeans. They don't expect you to be 'race ready' if you've never been on a track before. Thus the limited intro class. Also, the INTROs are not allowed to pass on the track. It's not racing like be competitive and beat your buddys or anything, but if you've never been on a track with your bike it's AWESOME. Check the link for the free session signup. Best thing I've done this year - next to Busa purchase.

I'll never go pro. I'm just a commuter and weekend hooligan.... and I couldn't afford all those tires!!

Donating Member
Registered
I hear ya on that one, same here weekn hooigan.