Registered
I read an article today that stated Max Biaggi will make his World Superbike Championship Debut next year with Suzuki... would have loved to see Max back in MotoGP but it's awesome he was able to land a deal there.

I think the signing of Biaggi will make WSB more competitive since Troy Bayliss has pretty much wrapped up another world title with little or no challenge this season.

Donating Member
Registered
wasn't Biaggi like #2 for a long time in MotoGP? Why did he leave it?

He's always been too up and down to really be a contender in MotoGP. He left MotoGP cause he's a major a$$hole and has burned every bridge in MotoGP, twice. He had the biggest sponser (Camel) with the most $ and still couldn't get a team. Now he has to down grade to WSB where I hope he will clean up his act and then start winning races cause he's got boatloads of talent but even more attitude. I say good luck to Max, I haven't given up on you, yet......

Registered
Do you remeber the classic battles Max had with Rossi a few years back ? Those two really hated each other

on the track. Kind of miss him in MOTOGP... has that 'attitude' & brings drama to road racing.

I will definitely watch him on the World Superbike Circuit ! 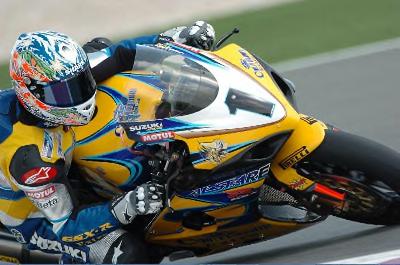 Registered
This is a big question mark I think. Remember Barros came from MotoGP and he was(!) one of the few riders in recent years to run up front in MotoGP. Now near the end of his first year in WSBK and he has struggled. Bayliss came from Superbikes so it is no surprise that he has jumped back in and won. Same as when he ands Edwards battled years ago! As mentioned above Biaggi has garnered a reputation as the paddock Beeotch in MotoGP. Anybody ever watched Faster? Every rider on that video slams him in one way or another. You don't stay at this level by pissing off all of your bosses and sponsors. Undeniably talented just needs to STFU and race! At one time he was actually battling neck and neck with Rossi for race wins every race then he started whining about his equipment and it all went south from there. I think that was a big factor in Rossi going to Yamaha just to show that you could win on it! And he has excelled at that!
You must log in or register to reply here.

Bayliss Accepts Rossi Challenge for the â€œDuel in the Desertâ€￾