I did a bad thing

Donating Member
Registered
This is what happens to me on a leisurely Sunday ride. 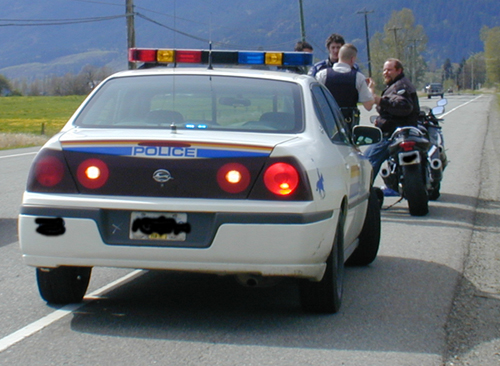 Administrator
Donating Member
Registered
Were you being a bad boy and how much is it going to cost?

really bad you let them catch you
M

Donating Member
Registered
don't know how fast we were going as he had no gun on us.
Said he was using visual estimation.
I'm currently in the process of disputing it.
The cop had a real crappy attitude.
He said he'd be chasing us for miles, then I told him I seen where he was parked about a half mile back, Oh he said.
Then he said it was good we stopped cuz they had spike belts out ahead.
I replied: "What,... they use spike belts on MC's now, you gotta be kidding me that could kill a rider".
All he had to say was "uuuhhhh well uummm they had the belts out ahead".
Then he said he had to do 180 klms to catch us, to which I replied: "and you think that's safe, a police cruiser at 180 in those corners. I'd say you were the one who was driving dangerously not us".
"write me a ticket" with a laugh was his return comment.
Flying swan can attest that we were full on waving at her group of bikers while he was catching up to us.
We didn't even know he was there at that time, he caught us at the bottom of a hill about 300 feet later.
I called his superior as soon as I returned home, and he was not at all impressed with his manner and he recommended we dispute the ticket.

Donating Member
Registered
Hey Bro, How did this turn out in the end?

Waiting on pins and needles on the out come.
T

Registered
hope you win although most won't against the police.
T

Registered
Bad MSF, Bad..... Now kick his but in court. Then send a copy of the victory paperwork to him, at work. :bounce: Nothing worse than a cop that is intentionaly being an ass.

Registered
How did you get that pic?
O

Registered
VISUAL ESTIMATION what the heck is that? he didnt clock you, no radar gun, hes a fool if he thinks that will work . even a halfassed,drunk,dislexick lawyer can beat that wrap.(no offence if someone who is a lawyer reads this).

Donating Member
Registered
Just remember folks this was posted originally about 6 months ago, so I am certain that all has been settled, I was just looking for a follow up...
M

Donating Member
Registered
I actually ended up being to busy at work to contest it, but I did speak to his superior numerous times.......in the end I filled out a formal complaint which went on his permanant record.......he then called me shortly after I filled out the complaint because I told his supervisor I was contemplating taking the whole story to the newspaper if he didn't appologize for his behavior........
I recieved the appology, so left it at that.

Oh yeah.......my wife was about 10 mins behind us in my Tahoe.......we were coming home from our wedding on the Tuesday......we were married the previous Staurday.
She pulled over right behind us with this big stupid grin on her face......and took a bunch of pictures........the Cop actually thought it was pretty funny...........new wifey taking pics of busted husband.
All in the past now.........didn't affect me that much anyway....ended up that I made more money at work by not contesting it than if I had of taken the day off for court.......it happened in a town an hour and a half from my home.....too much time for me to take off.
M

Donating Member
Registered
Anyone else have pictures of run-ins with johhnylaw.
Bullet.......Stunnah.........yer not allowed to take pictures of yersleves on yer bikes in yer popo gear and call it a run-in either. :tounge:

Registered
i dont if these suggestions will work in other countries but for everyone in the US b4 u decide to pay a ticket.. checl out ticket assasin... im not sure the exact website addy but u can do a search or if u still cant find it email me and i can find out for u.. and california riders if u get popped... u better fight it! the odds are in ur favor to beat it!!!!!!!!

Registered
Pics of a run in with the law?
:bounce:
Of course,
The LaBusas Salute was in order! 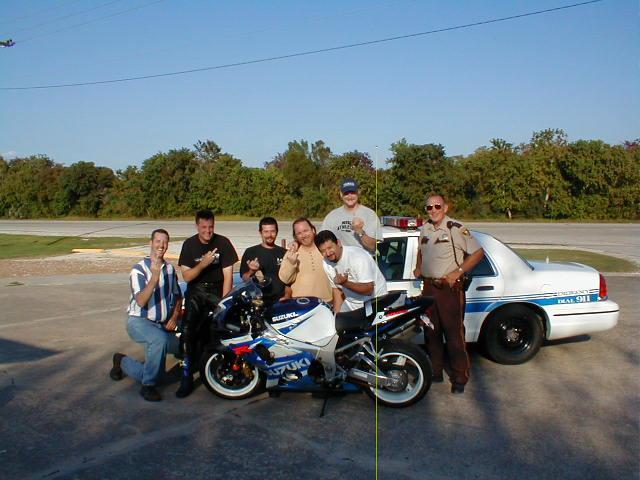 Registered
lol well id say not guilty and let the judge decide. screw him for being a d$#k.
P

Registered
You were just "mounted"!

Registered
No ticket if he can't prove your speed how can he give you a ticket for perceived speed can't happen.The Judge should only consider evidence.He could pull anyone over and say hey you looked like you were speeding especially on a fast looking bike like the BUSA.
You must log in or register to reply here.