HERE IS A LITTLE STORY...

Registered
Here is a little story called, "The good and bad of it."

Today I decided to go riding... you know, just a little putt down the street...

As usual I doned my full Vanson racing garb, boots, gloves, helmet... and for the first time in a long time, swing a leg over Fulltilt's zx12r which is on loan until his return . Its a great bike... will outhandle any busa in the really tight stuff, but is not as stable or fast, or have as much torque as a busa. It is nearly a perfect compromise for the tight twisty roads surrounding my house.

As I pull out of my driveway and down the street, I begin approaching the school zone in front of the school by my house, and notice that the lights are blinking and kids are about... so I slow down. As I round the corner, there sits a cop radaring every passerby, and I quickly glance down and notice Im doing the speed limit... lucky me.

So I go for my ride, effortlessly passing cars and cleanly dragging knee around each corner with a precision and eutopia that I have so long since taken for granted by riding motorcycles. As I ride I begin to think how wonderful motorcyles really are... so fast and sleek and beautiful to the eye. How we almost all take them for granted. As I take a corner especially fast my front tire slips just a little bit and as the exhileration flushes thru my body, I am reminded just how thin the wire is that we walk on... .

Now I am really getting into it... Im slowly becomming more comfortable with this new machine and now the front wheel is lofting around all but the slowest corners... carry it, carry it, drop it, and turn sharp into the next corner. Drag, drag, lean, drag, straiten out, punch it! Rinse and repeat. What great fun!

Down to the coast highway thru Encinal canyon I fly. Measured by the bumps and corners I have memorized by a thousand passings... my worries and troubles melt away to the music of 1300cc's of Muzzy music. Being that its a Thursday afternoon, I all but have the roads to myself. This only adds to the fun, I think to myself. I should have known.

Ah the coast highway... cool salty air, a grand view of the Pacific ocean in all its glory, smooth pavement, and lots of cops. Here comes a jeep doing 70 comming down PCH in the fast lane. Swing a quick right, and look in my rearview, there he is maybe 30 ft behind me. PUNCH IT. I turn my head to the left and Im looking at the guy eye to eye. He has a dazed and confused look in his face... like, "how the hell did you do that..." Bullseye, and I laugh to myself.

As I drive next to the jeep he begins gawking at me like Im from another planet, and with the gear Im wearing, Im sure I look just like a power ranger, but hey, thats just the way it is. Two more cops pass, Im still doing the speed limit. Its funny how for the last 15 minutes Ive been running triple digits down Encinal Canyon and now I can pass a cop without getting busted... I scoff.

Now onto Mulholland. Another road that is imprinted on my brain like a map. But not a regular map, a special map. A chronological and precise topographical, traction, driveway, blind corner, dirt spot, road work, high traffic, strait away, sweeper, crack, bump, well you get the idea... its a motorcyle map! Who but us knows what it is or what it means... nobody Im sure, but every good rider has a filing cabinet of them in their head. Funny how that works...

I begin sweeping thru corners, one by one, with each turn gaining speed. Throttle hard, brake late, set your speed, and then LEAN... the sound of my pucks on the pavement is heaven. The scraping sound is indescribable to anyone who hasnt produced it themself. Thru the corners I go!

Just as Im feeling the high of it peaking it happens... a car comming, a car in front of him stopped... a dip in the road. Suddenly I clinch up, and a shot of adrenaline pumps thru me as though from a syringe. I have but a moment to react. I know its comming, he doesnt see me. I crest the small hill on the right side, alert but relaxed... covering the brakes front and rear, and ready to react. Sure enough he does not see me, but its worse than I thought. He is COMPLETELY in my lane, and accerlating to pass the car. I see now its a new silver mercedes. We make eye contact for a microsecond... now he knows Im there. Its too late for him, he is commited. I have no place to go... except, out side. I dump the bike over to the peg by turning the bars hard to the left, and then swing them back right to catch the bike before it falls... I see the integrated turn signal on his mirror as I pass it by a foot. I catch a glimpse of the drivers face, an older man, with wide eyes and a guilty look on his face. Its etched into my mind as I now see a mail box comming fast. I think of my wife, my future, my bike, my health for what seems like hours... again, I peg it to the left and nearly miss his rear turn signal as I pull back onto the road. I did it, I survived again.

Well, you can say two things about it... if I had hit him I would be dead, and it would be for no other reason than that I had been riding a bike. On the other hand, if I was in a car, I would not have been able to avoid the accident in the first place. A fair trade off, I think to myself, and ride on.

At the end of the ride, I take on one more very twisty canyon road and as it comes to an end a mile from my house, there sits the same cop I saw earlier with a scowl on his face and a radar gun in his hand. It is only the fact there is a sharp corner at the very end of the canyon that has saved me a ticket. I think to myself how lucky I am to be alive, and how such a simple thing as one ride on a Thursday afternoon can have so many interesting things in it, that I am compelled to write a story about it and share it with my friends...

Must be nice to have weather this late in the year you can actually ride in!
JT!

Ya know, you should write a book er somthin.

Thanks for sharing that, my heartrate raised several time whilst reading it! Thanks!

Registered
great story,yes we have great weather here in Cali. I am taking a ride in my new busa 1 day old 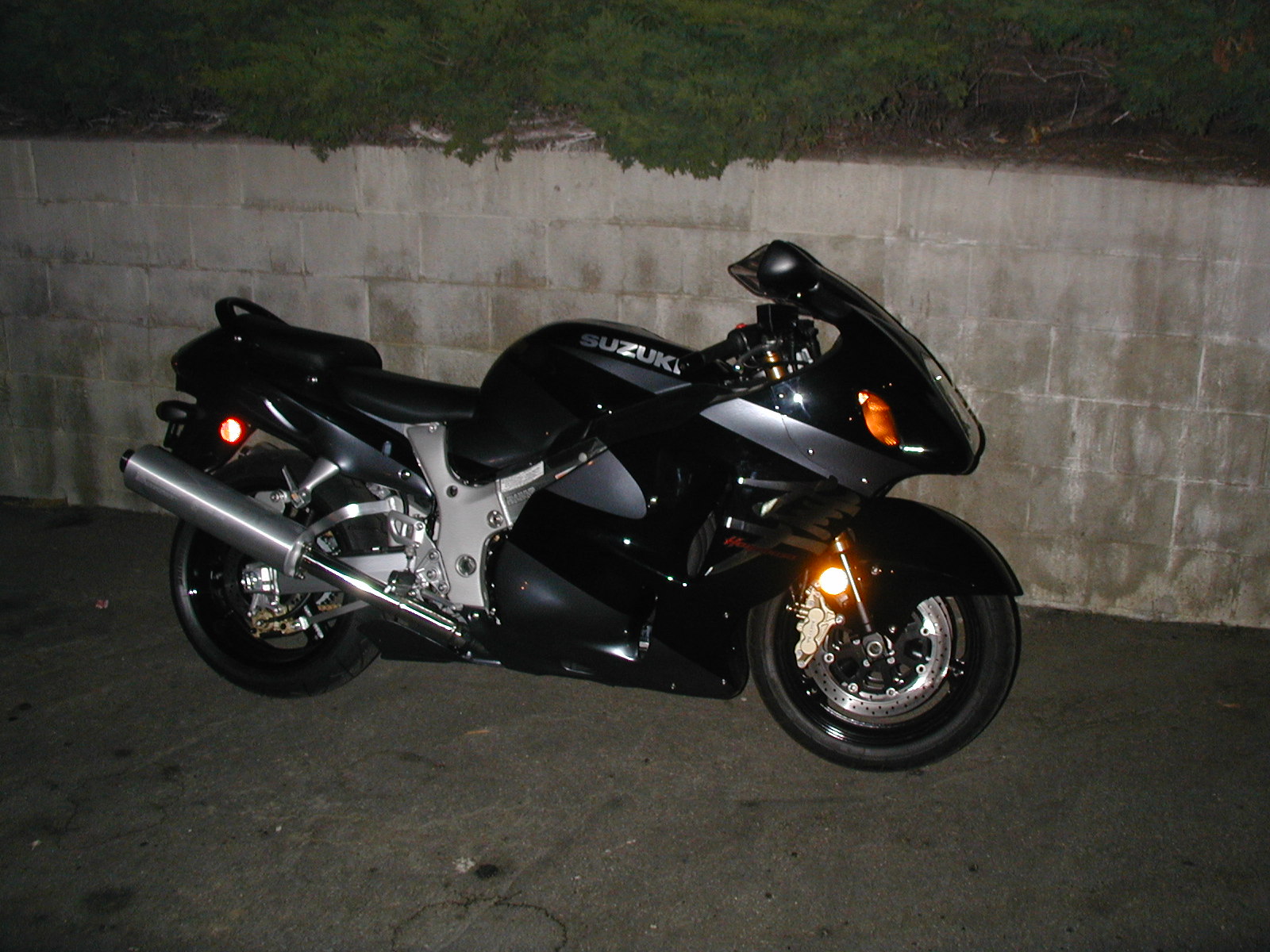 Donating Member
Registered
Thanks for the story Nick...
I particularly like the Motorcycle Map Filing cabinet, Very true.
Thanks for sharing man...Good stuff, glad your intact.

Staff member
Administrator
Registered
Great story telling Nick...glad you made it home safely...
...a chance to truly test all of your skills, wasn't it?

Registered
Great story, thanks for sharing. Gee and to think I was born in CA and ended up in VA. Oh well, I actually like it here but you can't beat the CA combination of great weather and great places to ride. Ride on.

Donating Member
Registered
You should write for the magazines, dude. I bet if you submitted that to some of them it'd see ink. Nice tale and glad you're ok, dude.

Now, please tell us that you had the camera rolling to capture that pucker factor moment.

Keep safe and keep those vansons on ALWAYS glad you are good to go again.

And I do so love your videos

Registered
Thank you, Nick. It's always good to read a nice story... I am glad it had an happy ending.

Donating Member
Registered
Nice story, I though it was going to have a real bad ending. Glad I was wrong

Registered
Hey Nick, you had me on the edge of my seat. Good visualizations. I agree with Bullet, send that in somewhere (you never know).

Hey you still working on that DVD. Chris
N

Registered
here is a VIDEO of the canyon run, not of the "incident".

definitely worth checking out...

you may have seen this before...


the video is still on my mind.

Registered
Thank you for that Nick,
This was the last post I was going to read before getting some work done around here. I lived vicariously through you on that one. I agreee with them that is publishable!

Donating Member
Registered
WOW, nice save Nick! How many bikes does Kerry have???

Registered
great story nick glad you made it back safe

too bad ya did not have the video cam going and got it on film !!
that would have been cool to see the old guys face when he knows he is azzhole in the wrong lane !!!

Registered
Wow, Nick! What a breathtaking story! Props to you for not panicking, and getting out of it.

Donating Member
Registered
Nick I was with every word...Does your friend have a big bore kit to make his 12 1300cc's???You should send that in it would make an excellent movie...

Registered
Great story. I enjoyed the read. Glad you made it back safely...
You must log in or register to reply here.

I Raced a Harley Today!

A story about my chicken strips and low flying little green men....
2

Almost got blown away by a harley
2 3