Any of you going?

Registered
To the L.A. Calendar show at the Queen Mary tomorrow?

I will be there with my 580 hp street bike and should run it in the Dyno shootout (I have won it 6 of the past 7 years) I have made 545hp there a few years ago with a race bike of mine however tomorrow will be with my street bike that made 500+hp there last year..

Donating Member
Registered
What time does it start and how long will you be there?
I have commitments until mid afternoon.
Bubba

Enjoying 1 road at a time

come on give the guy a break ...with that hp he just got back from a trip in time to bless us with his knowledge lol
O

Registered
Actually I had 2 posts in 7 years and the rest in the last week or so...

I will be there around lunch time and will be rolling a black Turbo Busa with Carbon fiber BST wheels..

Donating Member
Registered
if you do 176 mph when you activate the Flux Capacitor...do you go back twice as fast?
O

Registered
I think 176 puts my in fourth gear...

Registered
Well we are back already, rode the bike to the show and made two runs on the dyno, first one was in a street trim and made 299hp, second pass was 418. something and since the second place Turbo bike only made 258 hp we called it a day and rode it home..I forgot that I still had the big boost in it and went a little crazy on the way back however no small children were hurt on the way home..however the same could not be said regarding the guy with the Black Viper..

I will post a picture later of the bike.

Donating Member
Registered
I went but was too cheap to pay 60 bucks to get in and park two bikes.
So me and the wife did a free Spyder ride and that was fun.
I went to the dyno area and did not see a black Busa. You probably had left already.
What area do you live in.
Bubba

Donating Member
Registered
Okay, but this is the only pic I took on the day in the parking lot.
Bubba 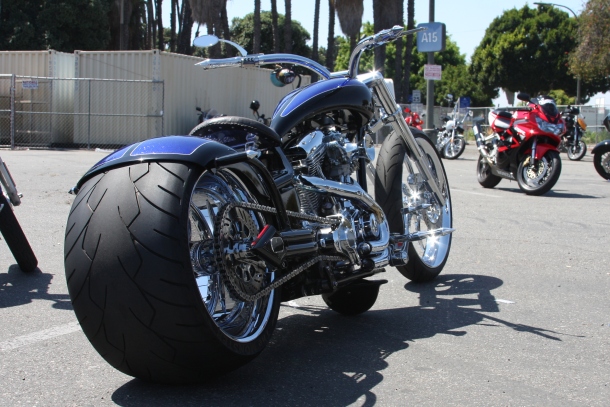 Registered
I rolled in and told the parking girl I was there for the HP shoot out and then rolled up and went to the last gate and tole the "guard" that I was there for the shoot out and I was going to leave my bike with him and would be right back...went and found the Dynajet trailer and came back for the bike..puched it over and ran on the dyno.

While I was waiting I met with Jon Reed from SportChrome (he is sponsored by Rockstar enrgy drink) and put down a few cold free ones.

We then went back to the dyno and ran (again for free) two passes and then unloaded the bike and parked it on teh grass.

The show was smaller than all of the previous years however it was good so see some of my Busa brothers and sisters out there..

I will post up a picture later.
I am in between commercials on NHRA today on ESPN, back later.