Registered
This is just a thread to see if the "gentleman" that added a extremely childish and ignorant comment to one of my wheelie pics will come forth and speak on an adult level.

If anyone here has seen some of the pics of wheelies that I often post, they have seen traffic in only a few of them (like two).  Even in those pics those are people in a small Texas town that normally stop and watch us record and take pictures.  The other pictures are ALL taken in an aboandoned section of road that was meant to be a divided highway that has not been finished.  They stopped work on it over two years ago.  The only traffic that comes through that area is a Security Guard that works up the road about a half mile, and younger people that stop to "watch the show".  Narcissus can attest to this...he was there and saw two cars the entire time......one was some knucklehead in a truck showing us how fast his truck is and the other was "the security guard".

I know we often express our opinions in this forum and we all have every right to do so.......that's what we "fight" for right?

However, I do my best not to offend anyone when expressing my personal opinions or when I just want to get something off my chest.  Whoever added a comment to the five bike wheelie picture in the stunt album did not feel this way.

I have one thing left to say to this person........watch how you talk to people, internet courage is one thing, but when you meet someone face to face, things might be a bit different.  Not to threaten anyone, I don't do that.  Just making a very, very valuable point.  Better yet, I'll generalize my statement.....it might be in one's best interest to apply some critical thinking to one's comments; one must think before one makes a hasty response to ANY issue, question, or topic.  One would not "be allowed" to speak to Neill in that manner in person, therfore one WILL NOT be allowed to speak to Neill in said manner on the internet.  Have a lovely day all.  And you too Mr. Internet Tough Guy.

Neill a.k.a. Busahigg
NEXT WEEK I'LL POST SOME STAND UP WHEELIE PICS.......

Moderator
Registered
No use being bothered by retards arguing on the net.

I went ahead and deleted the comments.

Here is one of the two, in case anyone is really, really curious:


Please don't get your feathers in a ruffle behind this idiot. Sounds just like someone who surfs the site just looking for something to say and to be heard. If his comments were truly a bash on your pictures and how or where you ride, he/she would have only commented on that. He/She wanted to talk about a bike that has turbo and NOS. Maybe he/she was trying to get some attention for a race. What do you think?

You're a cool guy Higg, so let's not let people come to this site with ignorance and stupidity that ruins our pleasure. Keep sending the pictures, cause I like 'em. Helps me a little with my wheelie technique there homie.

Registered
Sounds like something that RANGER would post!
8.70 on a TURBO, NITROUS Busa??
I would be an sugar too, for having such a TURD!
D

Donating Member
Registered
Well, I can tell ya this much from his ip address.. he's a dial-up AOL user. That IP has never posted on the boards here but that doesn't mean much since he is on dialup and gets a new one evertime he logs on.
R

Registered
i for one have been enjoying your pics since ive been coming to this site !sooo please dont stop posting them.

Donating Member
Registered
Chill higgy baby, their just tryin to get yo goat and probly wish they could do half as good. Love that shot w/ all bikes up. Keep em comin but plz be careful... - Kent

Registered
and just in case anyone doubted that the road is blocked off. 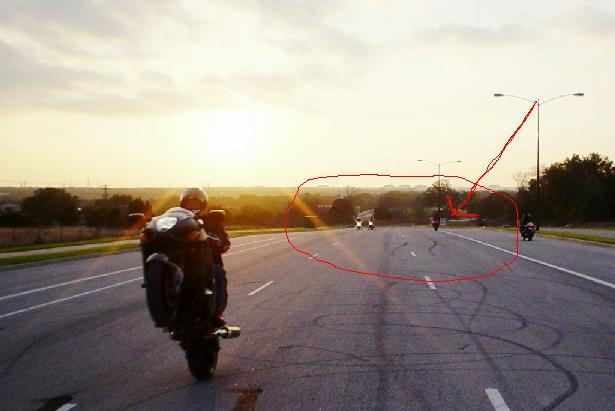 Registered
Where I whellie is a place that there are no cars.............side walks in an area town that the elderly live in, with no helmet wearing shorts and sandals.

Registered
I wheelie anywhere I damn please. It is a free country. That is why our boys and girls are fighting for us! GOD BLESS AMERICA!!!
P

Registered
poop I just wish I could wheelie

Registered
We are slowly piecing it together. Trying to make a "real" video. So far we probably have about ten minutes of good clips.

Our name is <span style='color:red'>Knucklehedz</span>.

Registered
Nice pic.  Sorry that some azzzwhole had to add his or her comments.  By the way 8.70 with Turbo and nitros is not that good.  very few Turbos would run Nitros also.  The Nitros would be for coold down only.  My Turbo with out Nitros will pull 8.8 with a good rider.  This guy is smoken pot, and if he is factual that narrows it down to a very few Busas.  hang in there Bro.  We will keep an eye out for this person...

Registered
I kind of figured that 8.7 with both was not that good. I don't know much about either Turbo or Nitrous, but that sounded kind of lame. I mean the world's fastest Busa is running like 7.97. And I don't think he's running both. Whatever..........I bet his Turbo he can't keep up with me on any road. Perhaps I might even see him one day.........now that would be something to post pics of. LOL!

Registered
Yhea you could wheelie right on by.

Donating Member
Registered
Do you smell what the Higg is cooking???That's right Higg get your

That's some of that bad a$$ Genii representing going on there...

If you have a Busa, Just pull the clutch, rev it, and dump. Then back off when you get to the top ever so slightly
S

If you have a Busa, Just pull the clutch, rev it, and dump. Then back off when you get to the top ever so slightly
Click to expand...

Hey man he only wants to wheelie...Not be body slammed...
You must log in or register to reply here.