Went to the dragstrip for the first time today!!!

Registered
I just started going to the track myself...it's a blast. The one I go to is only 1/8th mile..but still pretty fun. My 60' times are about the same....we both need a little work...lol Keep us posted...

Registered
I'm going to order a front end strap from schnitz I think that'll help. I know I can leave harder but I get worried about looping it out!

89mustang said:
I'm going to order a front end strap from schnitz I think that'll help. I know I can leave harder but I get worried about looping it out!
Click to expand...

I hear you...that's my biggest fear...lol I strapped mine and lowered the front about an inch....I also put a Shinko Hookup on the rear. I dropped over 1/2 second.

Registered
I just bought this bike about a month ago. It has been lowered in the front a bit. I'm not sure how much, other than the slip ons it's all stock. I didn't even air down the rear tire at all. I wish I could've got a video so one of the guys that drag race all the time could give me some pointers.

Registered
Same here...I get a little help from the guy that owns the local shop that I take my bike to for whatever work I need done. He runs 6.3's (1/8th mile) on a stock touring Busa...lol I was trying to launch around 4k...he said 6k would be better and it was...less drop off when I slip the clutch. I was also told that when I'm staging to let the clutch out just enough so that the bike is nearly moving...that way it doesn't pop as hard when it engages. Makes the launch a little smoother. There's some good threads here from people who know a lot more than me...just gotta dig through them. 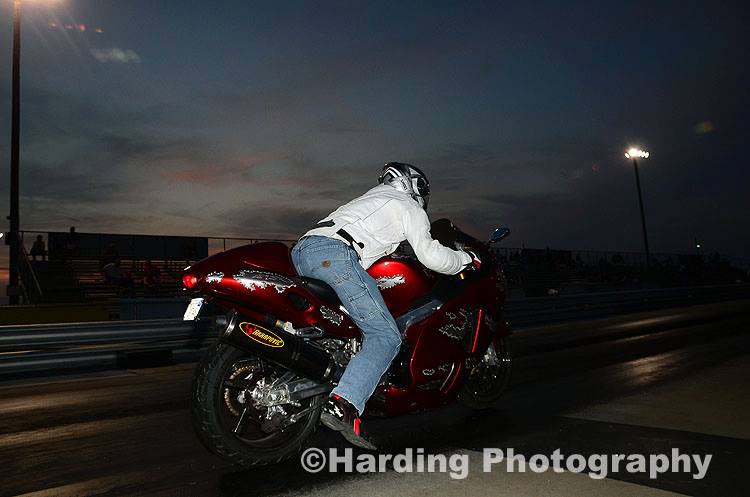 Donating Member
Registered
Not bad 60' for your first time!!

89mustang said:
I'm going to order a front end strap from schnitz I think that'll help. I know I can leave harder but I get worried about looping it out!
Click to expand...

Registered
Thank you frisbee I know I have room for improvement. I'm going to head over there every Wednesday I can. Quicker I will try a 6k launch. And golden child I might hold off on the straps till I get a little better on my launches. I know they help but there's more in it the way it sits and once I feel I need to modify to go faster then ill get those straps. Thank you
D

Registered
The strap is essential for drag racing a Busa. Learning to run without it will just be wasting time (to a point) in your quest for 60's in the 1.5's. You are doing very well so far though! Lowering the bike is also quite helpful. If you get adjustable lowering links you can easily change the ride height as you desire.
8

Registered
If you think it would help. I'm deffinately open to suggestions I just thought practicing my launches as it sits right now would help then get the straps once I get it perfected. Ive heard the adjustable lowering links never put the bike back up to factory height. I could be wrong though. I still wanna take it to the dragon in the spring. I did have a lot of fun though might turn it into a drag bike haha
D

Registered
The strap helps for sure. You can buy the multi-hole lowering links and just change holes when you go to the strip if you don't like the adjustables. I started out like you so I know where you are coming from. I didn't want to lower my '05, didn't want exhaust, and didn't get a strap immediately. I did all three of these things and I decided I liked the looks better lowered so I ended up keeping it that way. When I bought my 2008 I lowered it as soon as I got it home. Now it is basically a drag-only bike.
D

Registered
Also, as you get better at the 60' if you find the clutch chattering on the launch you may find yourself getting Brock's clutch mod (or other variations).
8

Registered
Dennis I seen your video with you running that low 9 pass. That's amazing! I still like riding it on the street how does lowering like that effect street. The clutch mod is heavier springs right?
D

Registered
The clutch mod is one piece to replace the two piece back torque limiting feature (slipper) in the stock Busa clutch. The spring pressure goes up as the slipper actually provides increased pressure under load which no longer is present with the clutch mod. Generally speaking, other than the higher spring pressure you won't notice it being gone unless you drop it into a gear much lower than you should and let the clutch out with the throttle closed. You also won't see any advantage if you aren't getting clutch chatter. I've had bikes that don't need it, and one that absolutely needed it.

The lowering makes the bike handle differently. It doesn't like to turn as well but I am used to it. I ride the corners pretty conservatively so I really don't feel like I gave up anything. Lowering gives the feeling of riding "in" the bike instead of "on" the bike.

I went 9.60 on my 2005, stock wheelbase just lowered, strapped, exhaust, and air filter removed. I've been 9.20's on my Gen-2's set up similar (but with an air shifter). Others have certainly gone quicker with less.
S

Registered
Congrats on getting your bike to the track! Very good times for your first attempt. Just have fun with it and keep practicing.

Dennis said:
The strap is essential for drag racing a Busa. Learning to run without it will just be wasting time (to a point) in your quest for 60's in the 1.5's. You are doing very well so far though! Lowering the bike is also quite helpful. If you get adjustable lowering links you can easily change the ride height as you desire.
Click to expand...

I agree...everything begins with the launch. The strap and/or lowering makes a big difference for me. It obviously helps keep the wheel down...and that helps my confidence that I can get on the gas more than without it. If you're gonna race it at the strip...you're most likely gonna strap and lower it eventually...so the sooner the better to lower your learning curve..and your times. Just my opinion...
8

Registered
Anybody recommend some adjustable lowering links? I have a race
For fun coming up with my uncle he's got a vmax.

Here is a link

Registered
Thanks! I'm gonna order a strap and the lowering links this week.
You must log in or register to reply here.

Went to the track for the first time!!!

First time at the track

Went to the track yesterday