Donating Member
Registered
Forgot to mention, I got a new job today. Never thought I'd bend and take one at Wal-Mart but I'll do this for the time being until I find something else.

Anyway, my first day on the job and I run into this lady.

A very loud, unattractive, mean-acting woman walks into Wal-Mart with her two kids in tow, screaming obscenities at them all the way through the entrance. She's dressed in dirty jeans, a greasy t-shirt with holes in it and wearing flip-flops exposing her cracked and filthy toenails. When she yells at the kids, she exposes her yellowed, crooked
teeth with more than a few missing.

I say, "Good morning and welcome to Wal-Mart. Nice children you've got there. Are they twins?"

The ugly woman stops screaming long enough to say, "Hell no they ain't! The oldest one, he's 9 and the younger one, she's 5. Why the Hell would you think they're twins? Do you really think they look alike?"

"No", I reply, "I just couldn't believe someone had sex with you twice."

(Shamelessly stolen from another board!)

Donating Member
Registered
That's great Louis, I could picture you at the customer service counter with your Wally World outfit

Donating Member
Registered
Can I help you? 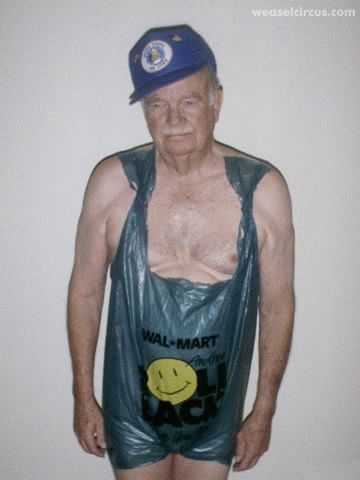 Donating Member
Registered
Don't give up your day (walmart) job

Donating Member
Registered
First and last day on the job

Symptom of our Problems: Wal-Mart Litigation
2