calling someone who knows a fair bit about ECU tuning!

Registered
im looking for someone who knows a fair bit about ECU tuning (the actual settings and where to set things). i noticed since i have gotten my bike Ecu tuned. my mpg have jumped in half!

im just looking for someone to take a quick look at my Bike's file to see if it all looks in order, and nothing was fat fingered or miss entered to cause this kind of issue!

perhaps johnny cheese or someone with some past experience will say something!

Bike was tuned in chicago IL at around 70 degrees

thank you to anyone who can help me!

Donating Member
Registered
Have you opened it up and compared it to a base map?

Donating Member
Registered
Did a quick compare to a base map. notice changes in color. 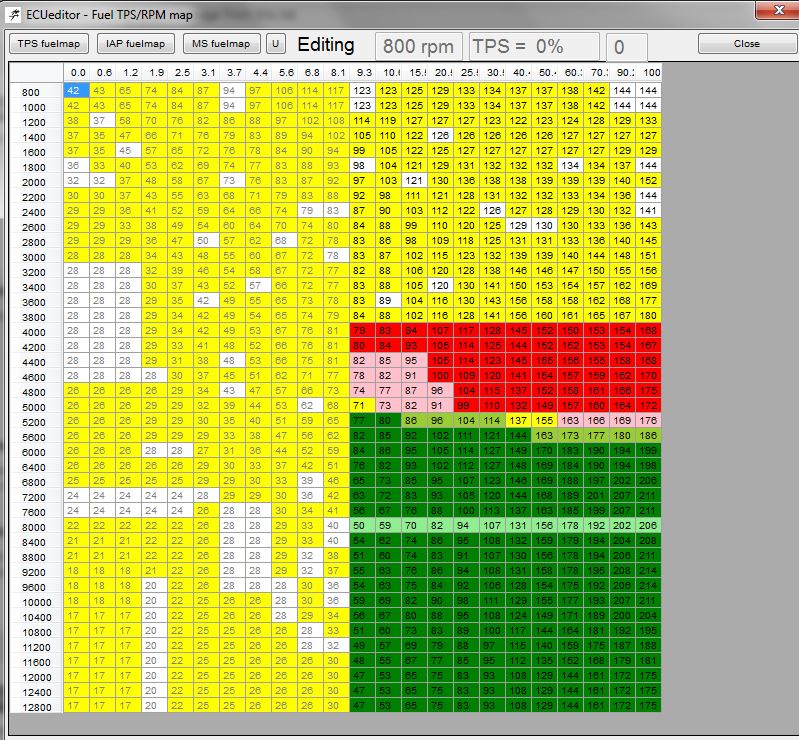 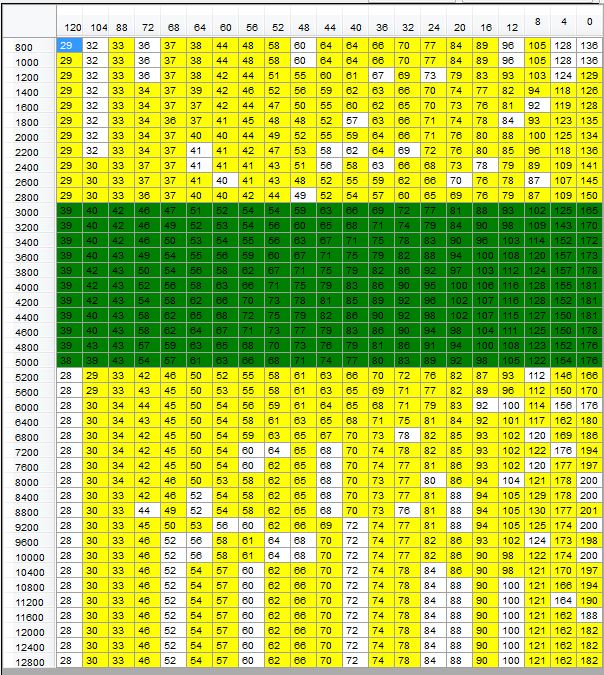 Registered
thanks for posting those. it might help some take a quick look at changes. i personally dont know basically anything about ecu editing. so it doesnt make sense to me.

Registered
yea i know thats what i keep thinking...-1 in front i wouldnt do that.

if its not the map..im wondering if the injectors have a poor spray pattern.

Donating Member
Registered
Maybe this graph pattern will help shed some light on the issues. you have a lot of added fuel in the mid range, probably where you do most of your riding but it drops off on the upper end.. my guess is that you are running SUPER rich... are you running a PC3/PC5? just for reference, the X/Y on the graphs is throttle position and RPM. 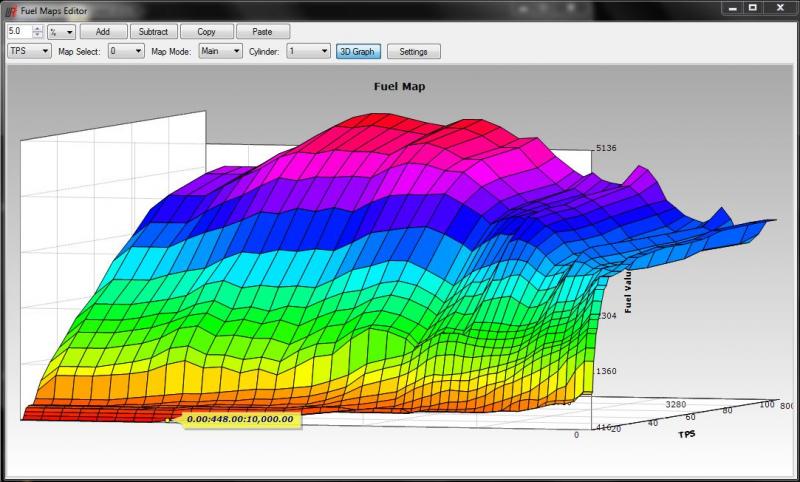 Registered
No pc just the ecu edit... Ok so I need to take it back for a re edit.. Thanks for the input! To bad I can't change that myself

icemansid said:
First one is a TPS map - second is IAP map (both compared to base map)
Click to expand...

I hope this isn't you map. If so find a tuner. or someone doesn't know how to use load control

Donating Member
Registered
Def not my map - it is the map in the thread... Although if you wanted take a look at ecu maps I'd gladly send mine over.

there ya go
S

Site Sponsor
Registered
if your bike is that far off and pig rich a stock map is probably closer than what you have honestly. I don't really have any canned maps for gen 1 busa sorry. do you have a copy of the map that is in your ecu now? If so try the stock one and see how driveability is.

Registered
wanted to thank smith for talking with me, it appears that unless anyone else has a "sane" close to canned map, or a flash box i could use, i will have to try and get it retuned sooner than i thought...

offer to anyone who might have a Map file that is close to where it should be, i can offer a little incentive perhaps!

Registered
Looking at the map, I'm not sure I would bring it back to the tuner who did this.

Look at your IAP map. This is all the operation below 10% throttle. It's based on manifold pressure and is where I would bet most of your in town driving occurs (Yes your mid range looks huge in the 3D map, but notice that is all happening at large throttle openings, at small openings very little overall fuel is delivered.) What we are concerned about is not the entire volume of fuel delivered but the actual change from stock fueling.

Your tuner is, I believe (and I am speculating here) mistaking ECU Editor for a Power Commander. The cells in a recent model Power Commander represent % fuel increase. If I didn't know what to do at the bottom end of a bike's fuel curve I could throw a general 5% or 10% fuel increase in there and probably have a bike that feels better to the rider, even if the actual Air Fuel Ratio would up running between 13.8 to 1 and 12.0 to 1. It wouldn't be tuned well, but it would respond well with no real perceptible lean induced flat spots.

What your tuner has done is increase everything in the 3000 to 5000 rpm range by 10. In ECU editor this is not 10%, this is a fueling value. Notice at the far left, your delivered fuel is in some cases 39. Stock it was 29. This is a huge arsed 30% increase in fuel! Your tuner doesn't really know how ECU Editor works, so he wound up throwing a fire hose of fuel at your bikes low end operating spectrum. I'm guessing he thought he was adding 10%, but instead he put a metric F-Ton of fuel down your intake tract.

Get the bike to someone who has tuned a few of these or has their own Busa tuned with ECU Editor. A Dynojet dyno and DJ tuning class certificate on the wall does not a tuner make.