Why I dont race cars anymore

this one above is classic. These slow and curious idiots are the absolute worst. This guy probably just spent $6,000 in "suspension upgrades" just to lose it on a straight street at 30 mph with no one near him.

The funniest part is the pre-puberty voices you hear in the background. How old is that girl who's screaming? about 15 I'd guess? LOL

Anytime someone says "Hey dood, I got a car that would whip that bike" I usually ask them to put about $500 up.

That usually ends all poop talking, havent found a car that even came close yet, lol

Donating Member
Registered
haha, I like the way you see him slam on the brakes when it gets a little sideways instead of just driving it out.

Idiots is correct, and I hope neither of them had full coverage on their little windup cars.

Moderator
Registered
It is pretty interesting, actually, from a social standpoint. In less than 9 years, we will see the largest population leaving the workforce and retiring and these kids will be beginning their careers.

Something tells me that a whole lot more than a few import cars will be wrecked.

that was too funny

Donating Member
Registered
haha,, scary thought Narc... I hafta kinda disagree a little though. I can't see todays kids being all that different than yesterdays.. there just doing the same stuff they used to do in muscle cars and etc. .. I think they will all mature up and be pretty good people.. and if not... ?
M

Registered
got the whole thing on video bro!

Registered
Well it is true that they are doing the smae thing that we did when we were younger, although I do not remember seeing anyone that stupid when it came to driving. maybe it is more videos now.

Registered
Wow I would be pissed!!! Last good one I saw was a kid passing about 5 cars at one time doing about 80mph. The second car in the line pulled out to pass the first car and the kid doing 80mph hit him from behind!!!
N

Registered
What a dumb ass.

Donating Member
Registered
I like the part where the girl says, "he/she JUST got this car (the Jetta) you idiot!" Yeah, and who paid for it? Daddy's going to be p;ssed!
O

Registered
totally got that on video, totally on video bro!!!

LOL this video is too funny

Registered
I can't believe he wrecked it. I guess the 150 HP was too much for him. My bike has more HP than that turd. It just goes to show ya you can build a car but cann't build a driver!

Registered
This is pretty typical of most teenagers, as i am one at least for the next 63 days. Its just a lack of good driving experience. Most want fast cars to impress girls with. So they drive fast, try to show off and screw up. But dont forget, it happens at all ages. Still its a funny vid to watch, and count how many times someone says F@#! or F$%@#&*

Here is my vehicular story of my driving experience since i have move to canada, and the main reason i am moving out of canada to finish college elsewhere:

In January I had an accident here in toronto during rush hour, I was going 10-15 miles per hour when i hit, look away for a second to check the other lane, look back ahead and suddent two bright red lights are in my face and no time to stop in the distance cause roughly $8000 damage to both vehicles. After this accident, the exact same thing happened in the other lanes, probly because of the nosy people looking at my accident, and BAM they hit another vehicle in front of them. A month later, a women in a small car try to squeeze beside me to turn as i was turning, got dirt on the bumper, i didnt know i even touched her car was so light, but she chased me down the road acting like a maniac. This maniac lady was in her late 40's or 50's. a week after that, i was parked outside my GF's school waiting and someone hit my rear bumper on the truck, a young chinese women, in her 20's i think. There are 40 year old men going thru their mid-life crisis, who have mazda turbos, supras, etc that drive like they are on a race track. There is only one thing that i have not found on canadian roads, old grannies driving big cars that they can barely see over the steering wheel, and are half def. but at least they are easy to dodge. There my rant, and maybe some incite for anyone planing to visit toronto.

Registered
Hey mike.......I think this car could beat us. It ran like a 4.something in the quarter....I think.....anyways, it's a jet car that was at the track friday when we went. It uses 26 gallons of deisel fuel for a 1/4 mile run. COOL! 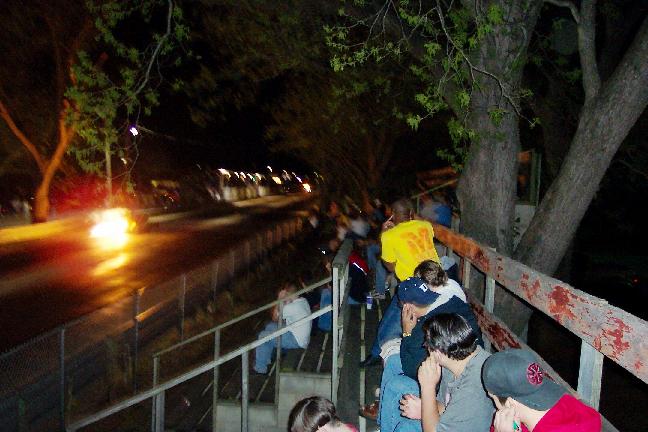 the legend of the mall ninjs