Donating Member
Registered
Use to be the black frame and a special color.

Donating Member
Registered
Few other things like black swing arm, a few late 2002/03 LE models for other markets had black forks/gold calipers.
Some LE's had accent's on the wheels. I think that started in 04,could be wrong.
LE's have different grafx,dependant on country imported to.Also sometimes an' LE emblem.
Some LE's have an extra letter GSX1300RZ...I cant remember what that means,it will come to me.
I believe the LE Euro had that funky front fender with the 2 holes resembling a birds beak.

Donating Member
Registered
If I remember right some had polished lips on the wheels.???

I believe some in 04 (LE's) pretty sure,got the "S" on the tank,instead of the painted "suzuki". I think thats when the "s" started.

Way back in 1999 there was a very few SE's (special editions) probably near impossible to find.Zook got together with Yoshi and they called it the X1. I think it had different cans.

I must now go

They are not really that special!

Donating Member
Registered
Rubb explained more than I remembered about my own bike. Basically, my '05 LE has solid grey paint, an "LE" badge on the tree, and black wheels with a polished rim. This is the stock photo from Suzuki: 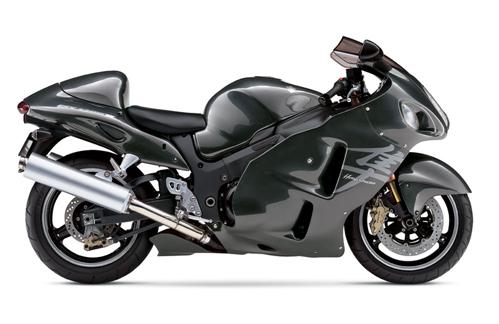 Registered
thanks guys was about to buy a limited logo out the part store to put on my girl but i remember that the busa has a LE model so i left it but now as i think i will anyway .because the thing i do to her will make her mine and limited to me.hey thats it . introduceing the new edition to the busa line up the "ULE" UN LIMITED EDITION.brought to you by Hookdaddy.I like how that sound

Donating Member
Registered
First LE was in 02. Here is a little help, but not up to date >> Suzuki GSX1300R Hayabusa model history

Registered
my 2013 LE is $200 more than the black or white bikes. I believe the only difference this year is just the color- that's it. Oh and I got a "I'm Special" pin

Was it worth it? I think it shouldn't cost more for a different color but it does; so since I like the flashy Miami beachy colors and since black and white bore me and you don't see any other ones on the road, I say hell yes. For some reason it makes me think of a more exotic color like when you see a yellow Lamborghini or Vette or something. Of course they sell those same cars in black and white too but I don't know if yellow would cost any more for them?

My yeller boosa has just a splash of red and I love it, I also think it serves as a higher visibility to bee seen on the road hopefully. My freind Dre has an '08 orange/black and we be stylin' cause you know I gotta show off!!!