Registered
i wanted to start out saying i love this site and it has been very informative.
I have an 06 LE with transmission problems.the stealership took it apart and said the 2nd gear dogs have been worn down and they will not warranty it.They said that it is a wair and tear item such as tires,chains and sprockets.I looked in the warranty book and it didn't say anything about the transmission not being under warranty.I have called customer service and they said the same thing.i have over 18,000 miles on it but i am way under the 1 year unlimited mile warranty.I am just wanting some input on what i should do,and if anyone has had such a problem. Any help is GREATLY appreciated.

Donating Member
Registered
You been at the strip huh?
D

Registered
There are plenty of threads around various sites. Lots of people have this problem.

It CAN be caused by "rider error" as Suzuki says. If you hit neutral instead of second and then kick it up into second and get a grinding sound you are abusing the leading edge of the engagement zone of the dogs. If you have a lazy foot and don't really engage it into second well the trans may pop out of 2nd into neutral. This abuses the dogs too. Some people have reported that the shifter is adjusted too high making the lazy shift effect more likely.

On my 05 when I hit 800 miles I started using the throttle more heavily and mine popped out of second several times. I ended up with the problem you describe at 1800 miles. I was told by the worthless Suzuki Customer service that it was rider error and that the dealership made the decision about warranty or not. The dealership (who always takes care of me) said it was up to Suzuki, and they couldn't give me the regional guy's name or number. The shop foreman took the bike apart himself and was surprised at how little damage there actually was. He showed me a bad gear from a different bike and said "this is what I expected to see". I asked if he would have changed the gears if he had the trans apart for another reason, and he said "No." Anyway, second gear (and its mate) is the ONLY gear in the box that isn't backcut. It is AS CAST. How stupid is that? Ask Suzuki Customer service to explain that one. I took the position that based on how little wear or damage there was that obviously the rider error couldn't be to blame. The dealership agreed and took my case to Suzuki. Suzuki paid for 100% of the cost under "good will". You will need the two gears, the shift fork, and the drum (probably some other parts too). If you end up paying yourself I recommend just sending the gears to Fast By Gast (FBG) and having them backcut. I sent my NEW gears to FBG before the dealer installed them. The price is very reasonable and second gear works flawlessly now.

Donating Member
Registered
Such is life bro, thats why I buy used.

Donating Member
Registered
what does haveing them backcut mean?

Donating Member
Registered
Mine has popped out about 3 times like you explained from 2nd to neutral. Mostly in first 800 miles. Not had any probs since.
D

Not a good sign. Make sure your shifter is adjusted as far down as you can comfortably use it, and always make sure it is fully in gear.
D

Sorry for the poor photos. I didn't know how to use my camera at the time.

You can see the dogs on the back side of one of my new gears in this photo. I don't know what gear these are used in, but second gear (currently engaged) is the same idea. One side is undercut by Suzuki, the other (non functional side) is as cast. Second gear looks like the non-cut side on both sides of the dog as manufactured by Suzuki. This angle on the dogs along with the matching angle on the mating piece pull themselves together when the transmission is under load. 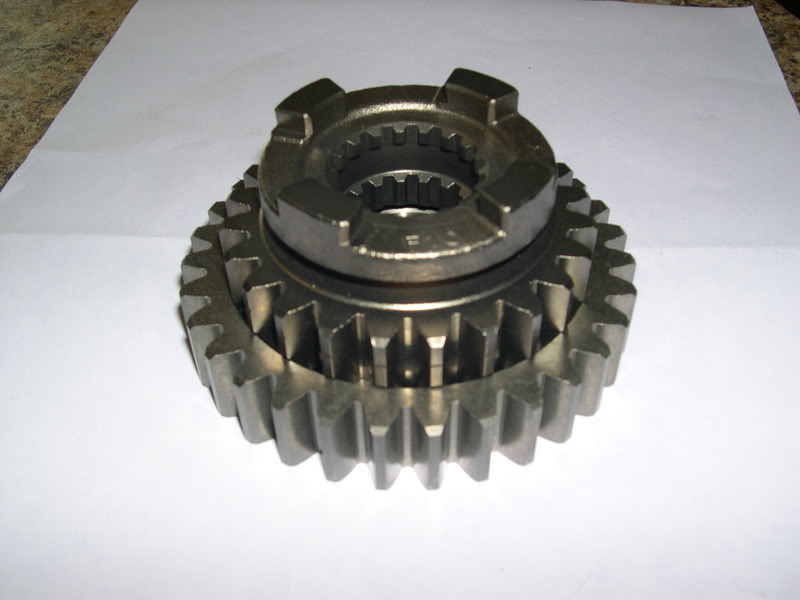 This is the mating gear. 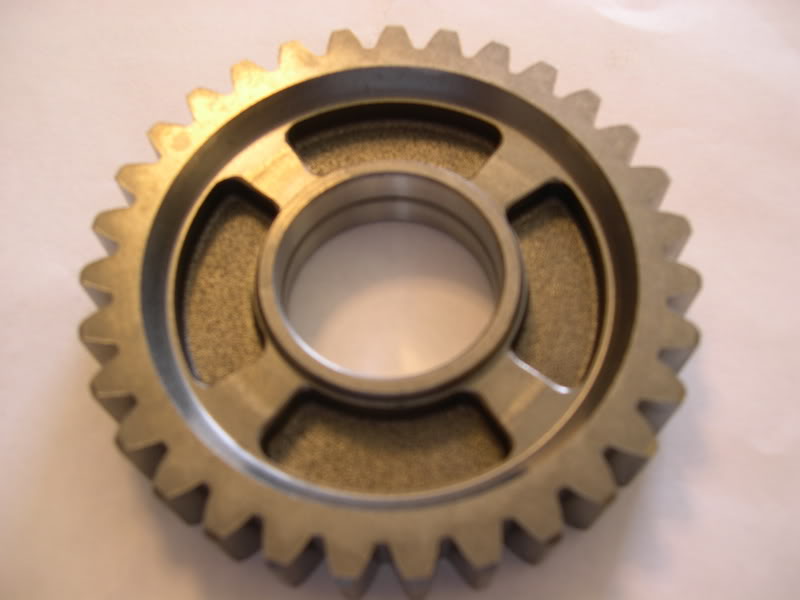 Registered
you said you had the problem with 1800 miles...that probably would look like rider error...but i have almost 19000 miles on mine...they told me the transmission is a wear and tear when in the warranty sheets it lists the wear and tear parts and the tranmission is not even listed...i don't know..i just dont want to pay the $1300 for it when it SHOULD be under warranty.

DEFENDER of the FAITH!

Donating Member
Registered
Had mine rebuilt under warranty no questions asked.
B

your best bet might be to gather maintenance records and seek legal assistance.

since your bike is already apart...there's little chance of taking it elsewhere.

suzuki really dissapoints me in this area ....and if this problem should present itself to me.... lord help the dealer that tryies to tell me I "race" my machine.

your best bet might be to gather maintenance records and seek legal assistance.

since your bike is already apart...there's little chance of taking it elsewhere.

suzuki really dissapoints me in this area ....and if this problem should present itself to me.... lord help the dealer that tryies to tell me I "race" my machine.
Click to expand...

see thats exactly what i was thinking..
F

Donating Member
Registered
Are the dogs the 4 block looking things?
How much to get them all "dogged?"

Stealerships will always try and put the
damage off on you. Warranties aren't
worth the paper they're printed on.

First thing I always do is find a competent
shop that is not a dealership and let them
have all my business. I feel like I will always
be the one who pays, so why not give my
money to someone who reciprocates? I do
the same thing with cars. If something major
like an engine blows up, I would go back to
the dealership. Otherwise, I let the real mechs
do the work.

I have to grab my ankles for a new bike (or car),
but I can quit after that first sale.

Registered
i have already been to another bike shop to find out what a "hook up" would be compared to what the dealer wants and it was already 300 bucks cheaper.But, i am trying with the warranty thing first.The dealer wants $1275 after taxes to do the job and thats including parts with a labor rate of $75 an hour.

Sounds like you're fugged, unless the dealership that has your bike agrees to put your bike back together for no charge. Unlikely. If they do; talk to another dealership or have one of the shops mentioned in other threads work it.

My local dealership claims they warranty everything regardless because they make money doing warranty work and the customer remains happy. Another dealership in your area might have the same attitude.

On another thread I believe someone stated $1500.00 for undercut gears and aftermarket parts, stating bullet proof trans. Maybe that individual will read your thread and speak up or you might try a search. Bullet proof tranny sound good.

I had problems prior to first oil change and have fugged up a few times since and have 7500 miles on my '06. It's running strong right now and I hope it continues. I would hate to have the bike and have to go from first to third until I could afford the repair.

Registered
well they said that suzuki won't warranty it....i am going to have a company rep show me how it is MY fault for the trans going out..trust me i would rather have a bullet proof trans for 1500 but when it SHOULD be free..i am trying to go with free.
You must log in or register to reply here.