Warning - Do not read if you have just eaten

Registered
Cruising Craigslist looking for a bargain, and ran across a 1987 Kawasaki 454 LTD for only $250 (not running). Wasn't familiar with that model, but the pic in the ad said "butt ugly."

Here's a better pic for your viewing displeasure.

And this one looks to be in excellent condition.

What a shame. It's actually a nice watercooled twin, probably the same engine as the Ninja 500. 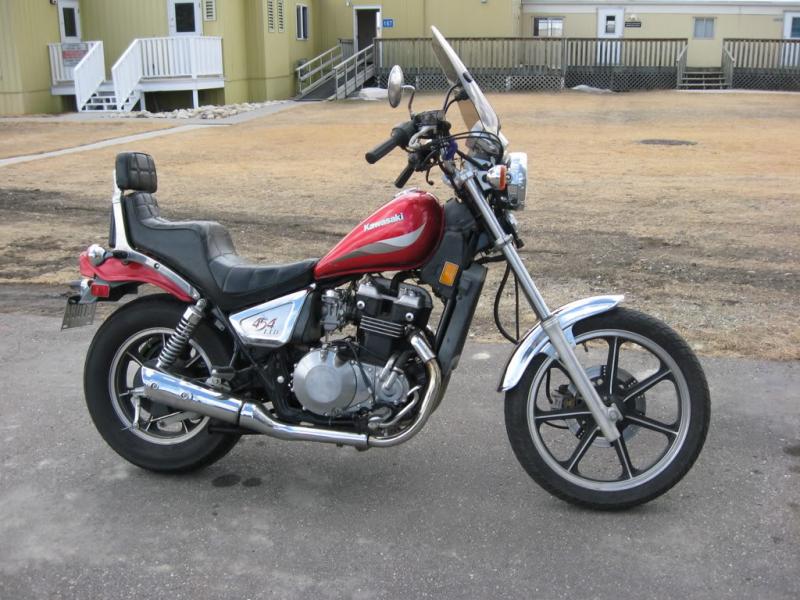 Registered
looks like a perfect starter bike for most folks

Registered
it is kinda ugly but a good find non the less.
B

Registered
I think i'd rock it, just to get people laughing and taking pics then get them going hey this guy has the exact same helmet from pics they've taken of the big girl???
P

Donating Member
Registered
Would make for a cool Cafe project.

Registered
Get another engine for the front wheel and then you might have something.. hehe

Registered
Not too bad for a 1987 and $250 sounds like a deal. To me it looks like any other cruiser from the 80's. I would have rocked it when it came out had I not been 1 year old. lol

Registered
i will buy it!!!! were is it? got a number or anything for me?

viperbluebusa said:
i will buy it!!!! were is it? got a number or anything for me?
Click to expand...

Moderator
Donating Member
Registered
I used to have an 84, I think it was an 84. Anyway, I had one very similar to it but I had a different seat. Traded it for a jet ski.

Pardini said:
Would make for a cool Cafe project.
Click to expand...

yea ...park it at a cafe and leave it

Registered
would probably make a great starter bike too.

Registered
I like old cruisers. I picked up an '81 Honda CM400 a few months back to get my girlfriend started riding. A couple more bikes and we'll have the garage pretty much stuffed.

I'd ride the hell out of that Kawi, then bob it and do it again. I planned on turning her CM400 into a bobber eventually, but it's in great shape so I think we'll just keep it that way and hang on to it. It's really similar in style to the CB550 I ran into my cousin's pool when we were kids, so the nostalgia factor is pretty sweet.

Registered
I never liked many of the 80's vintage Japanese cruisers, but think this one is particularly awful. The Honda CM400 is a veritable artwork of flowing lines compared to this ugly Kawi. Why do I hate this design? The forks are too long, but they've run the steering head into the stratosphere so they could keep the angles in check to keep decent handling. Otherwise it would handle like all the other choppers, meaning it would handle like a pig. Moving the steering head up so high cocks the fuel tank at a weird angle, made worse by the teardrop shape of the tank. The engine is not particularly pretty, and it looks too small. The worst to my eye is that king and queen seat - it's bigger than the engine.

It's probably a decent bike, good power, good handling, but it's just butt ugggghhhly. Wouldn't be caught dead on it.

BTW, the one for $250 did not look anywhere near as clean as the pic I showed.

Registered
fer 250 I'd prolly flip it, I don't see any rods hanging outta the block

Registered
here's the link if anybody wants it
1987 Kawasaki 454

no thanks, i already have one that doesn't run either.

Donating Member
Registered
LOL! I remember when those were new. They fit right in with many of the bikes of the day. I had a lot of great times in the 80's, but I have to admit, the aesthetics of some motorcycles left a lot to be desired.