Registered
Yesterday going through downtown L.A. on 101 fwy to Hollywood, right before 110 Fwy Interchange. White Toyota Camery with gold trim letters, lic plate 3LCL633 or 3LCL663 lane changed into me on my clutch side. I felt his tire on my left boot, knocked me to the right a bit and I throttled out. Wobbled a bit and regained control. I slowed in front of him to try to get him to pull over, he just changed lanes to try to slip out from behind me. I changed in front of him again, waving for him to pull over, he changed lanes back. I was not going to play chicken with him anymore. I slowed to let him pass and caught all the juicy details about him.

I have uninsured motorist and I was able to id this son of a b*tch, so I called in to my insurance and filed a claim. Adjuster should be calling me Monday afternoon.

Damages are mainly cosmetic, as you can see below, that's his white paint on the scratches on my clutch side OEM can, also a little bit on the front cowl. That's from me throttling out of there, because I didn't know what's behind me to get out from this idiot that route. What's not pictured is that after a day of riding now, I believe my clutchside foot peg bracket is slightly bent because I'm feeling more vibration and shaking on my left foot than before.

Funny thing is when I asked the girl at the insurance taking my info should I file a police hit and run report, she said it was up to me. But after talking to a couple of bikers at Cal Coast Motorsport, they correctly pointed out that I should so it will sent message to this as*hole to be more careful of, and respectful of bikers.

Called CHP and they said it is definitely a hit and run from what I described and I should ride down to my nearest CHP station come Monday to file a report in person and so they can take pictures.

I knew it was going to happen sooner or later, especially in this crazy L.A. traffic with all the idiots. I'm just glad that it didn't happen with me actually going down off my bike on the freeway. This is the second time I had a zero inch, full contact incident, and (knock on wood, hard) I didn't go down. I think that's a testimony to the stability of the Busa in hairy situations like that. 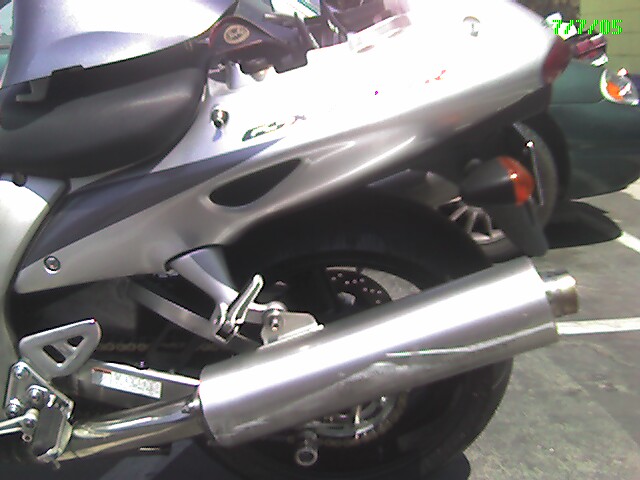 Registered
Plus at the end of the day, someone pointed out a dry wall screw in my rear tire that's about 5 weeks old! What a bad day it was yesterday. Luckily the guy that spotted it was Paul of Bike Performance in Oxnard and he plugged it for me and didn't even charge me a dime! Even though I offered him the $20 bill! He's got my business for my next tire change and purchase even though he's $20 more than Chapperal's. Plus, his mounting and balancing of a tire from riding it in is only $25!!! All in L.A./Ventura area, please give Paul a shot, he's on Savier in Oxnard. 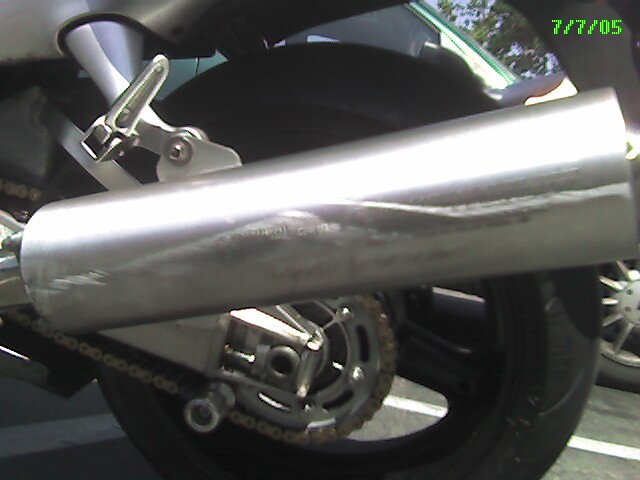 Registered
Oops. that's was a close up of the can. You can see that as*hole's tire mark just below the white paint. 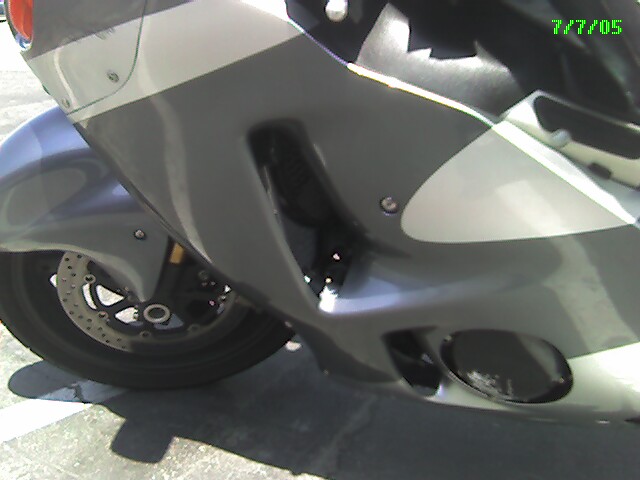 Registered
Glad your okay, had to be a scarey ride!

man seeing those pics..now i am really gettin scared of our freeways there ed.....im just glad to hear your okay...i think we have to go and look for this guy ourselves...he he..what do you say?? damn...all in all..i hope you get her fixed soon and get back ridin in the saddle...good thing she held up during the hit, cuz you know how our freeways are.keep me updated...
W

Registered
it's a good thing you're okay. file the report asap...

Donating Member
Registered
Bro I'm so sorry to hear about this. I would definately file a report against this individual. Just glad that your ok

Donating Member
Registered
Call the police and file a hit and run now. Don't wait. Make the guy pay for his stupidity.
H

Donating Member
Registered
id take the cop route and not screw with teh insurance company...how much is your deducable. im asking casue you can get a stock can for cheap and maybe buff out the paint but this is jus a suggestion

Donating Member
Registered
Call or go to the chp, file a report! have his arse arrested!

Donating Member
Registered
Things like this make me very angry!!
Glad your ok and you have insurance...... My suggestion would be to file a police report in addition to your insurance claim! Explain the driver hit n run...

Registered
You're very lucky. You need to burn this a##hole so he or she realizes that they have NOT gotten away with it. Might make them just a bit more careful for awhile.
A

Donating Member
Registered
Dang! You're lucky that you didn't go down. Hope that jerk gets what he/she dererves.
G

Donating Member
Registered
Very glad it wasn't worse then it was~ Definitly let the local authorities get his arse! Chicken chit bastid needs more then what they will do anyhow..

Donating Member
Registered
how did you case get scratched?

I called El Paso's finest and gave them the details down to his wheels and tire size.

They asked how I got so detailed description, I followed him for about 6 miles and wrote all the details on my Uniform sleeve (BDU's) and tried to get him to stop. He stopped but would not roll his window down or hang the phone up, I just yelled I was calling the police. El Paso's finest called me back and said they had him under arrest, asked me to ID the truck... No problem, they charged him and such. Not sure what he got but I know it would have been better to pay my $20 fee for the touch up piant... LOL

Donating Member
Registered
Glad your ok, take care of it right away...

Donating Member
Registered
Glad to hear you walked away... now file that report, maybe this time the cager will get some heat from their insurance company and the police... then again maybe not. you know how the system works.
I

Donating Member
Registered
Glad to hear that it didn't end up worse. Definitely file a report, and make him realize exactly what he did.
E

When he closed in and made contact with me, I throttled out. Seem more like he was trying to merge into my space rather than bumping me out. So that's my can scrapping his passenger side as I was throttling out to escape. Better than falling behind not knowing what's behind me.
You must log in or register to reply here.
Similar threads
Victim of Hit N' Run
Almost a victim
Last statement from a self-immolation victim
OMG i think i have been the victim of identity theft!!!!!!
Tsunami Victim Saved From Rooftop in Sea
ScooterGirl's brother-in-law crash victim
A visual explaination of tenacity, never be the victim
Tiger Attack Victim Arrested
Swine Flu Claims First Celebrity Victim
road rage victim in the making
Victim of Bank Card Fraud
Tiger Attack Victim Update
Latest e-coli victim
why let your busa be the next fall over victim?
Am I another victim of that \"cut-off\" thing?
Hit & Run Busa
Dadofthree was hit in Florida!
Recovered from being hit by drunk driver w/ no ins. And still need front nose for 06 limited pearl white to purchase, please help I'll never throw aw
So finally hit the 500 mark
2nd Hit From Behind.
Bout To Hit 10,000 Miles
Will A 'standard' Gen2 Hit 200mph ?
What will happen when I hit top speed limiter?
Motorcyclist hit by parts from MiG-27 jet as pilot ejects safely
Woohoo... I hit the 200 Mph!
Beach Boys Latest Hit
My friend went down,he hit a deer.
Someone hit me
20 Years ago today the most talented racing driver hit Tamburello....
Hit by SUV, sourcing parts
Hit Girl Kick-A$$ 2
Just hit 20k
Before I hit FleaBay
This just hit my area last night...
Friend Hit a Deer
This thing is gonna hit 900 million or so....
Hit bumps and bike shuts off? What to check?
I got hit
Motorcycle cop gets hit while directing traffic
Article: I finally hit 100K miles
I finally hit 100K miles
Good thing no innocent bystander was hit by this stray bullet
Don't hit deer!!
Wife was hit yesterday
Got hit by a Minivan this morning
Friend hit head on by drunk driver
Wanna see what happens when you hit a curb too hard in your truck?
A buddy of mine got hit
I hit/punched a deer!
Hit a bird, sucked him in my ram-air
Share:
Facebook Twitter Pinterest