Moderator
Registered
I have been toying with the idea of doing some mods and services on the side to help support my education in my shift from freelance web/grafix guy to doing full time RE investing and business ventures.

I figure this would be a great start. I see lots of people that would like decent fenders but either don't want to cough up the cash for a new undertail or are too afraid of hacksaws to mod the stock one. This would be a nice, inexpensive alternative for the 'not-so-doityourself-er'.

My mod is a bit different from any others. I first did this back in early 2001. I use the stock signals, which unlike flush-mounts, you can see well from behind, they don't alter the blink rate and it makes the mod look like it was done from the factory. I move the signals up into the tail (see pics). I also refinish the cut. You CAN NOT tell it was ever cut when done.

So, is anyone interested? If I get some response, I would be willing to buy stock undertails, mod them and exchange so that there is no downtime. Post and let me know. 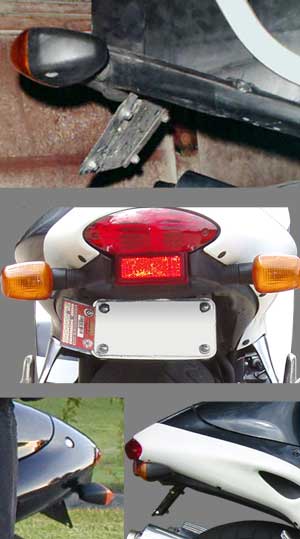 Registered
It looks like the signals are mounted to a part of the bike that has a bit of an angle to it. How did you mount the turn signals so they don't point in towards one another? They look straight (from behind) to me, which is very cool.

Donating Member
Registered
Looks good. When I'm ready to spend the money for a new undertail I'll probably go for the gunport style I've seen. If it is too much or not going to work yours is #2 on my list. Does look good without attracting the cop's attention.(Looks stock)
You must log in or register to reply here.

E
Ever un-modify a modification?