This kid should not be locked up!

Registered
That is awesome

Registered
RALEIGH - A Raleigh street artist has been arrested after police say that he used road construction barrels to make a giant "barrel monster" sculpture that he later put back on the side of the road.

The Raleigh Police Department charged student Joseph Carnevale with larceny in connection with the removal of the barrels, even though they were returned in the form of the "barrel monster". According to the News & Observer, Carnevale is a 22 year old history major at NC State University.

In a posting by "ULiveAndUBurn" on the website NoPromiseOfSafety.com along with a photo of his creation, the artist described his desire to create the sculpture and how he took the barrels.

"I couldn’t get it out of my head," said the poster. "Its that itch, that need to make real an idea that has rolled around in one’s head for days, snowballed itself into a temporary obsession that just has to be satisfied.

"I arrived in a flash and snatched them up from where they stood on the street. As I threw them into the trunk of the vehicle I had to rough them up some so they would fit. I shoved and beat and mangled them into place and was off before any witnesses knew what had even happened."

Once complete, the tall barrel monster was later placed back at the road construction site on Hillsborough Street.

According to posters on the website, the Raleigh Police later took down the barrel monster and dusted it for fingerprints.

The artist is not without his supporters and many expressed their admiration of his work on his website, calling it creative and out of the ordinary.

"I absolutely LOVE this! The eyes really ‘make’ it. More people should scratch their itches," said one poster.

"This is incredible. hope it doesn’t result in too much trouble," said another. "Don’t ever lose your creativity. this should be the new DOT mascot."

"I can’t believe you were arrested for this," said another admirer. "The city should pay the damages AND pay you an additional $360 for your contribution to public art. I love to make art too and you are now my hero, dude."

Even Wake County District Attorney Colon Willoughby questioned whether Carnevale should have been charged.

The construction company that owns the barrels have also conveyed to the media that they do not wish to have Carnevale charged and commended the artist for their work, whoever was reponsible.

PHOTO: Photograph of the barrel monster from the NoPromiseOfSafety.com website. 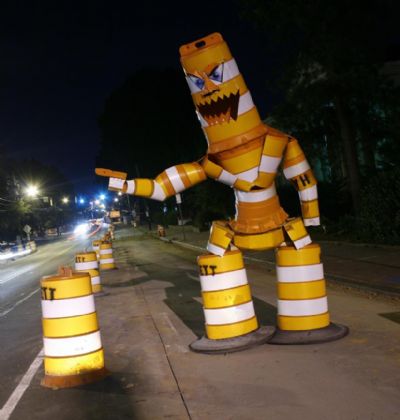 Registered
wreckless as it is thats great art...hope he doesnt do jail time

Registered
Dusted the barrels for finger-prints????!!!! Come on! Do the cops there have nothing better to do? Lets get finger prints off of safety barrels! The ONLY way finger prints are taken where I live is if there is a dead body.

Registered
tell me that again after the guy behind you on your bike is looking at it, and because he isnt watching the road, he rear ends you...

Just because the dog eats it doesnt mean

Donating Member
Registered
It is pretty funny but he should at the very least have to pay the construction company for their loss. Jail time I think is a little overzealous considering what people just get fines for...

Donating Member
Registered
It's cool looking, but it is still destruction of state or local goverment property.

Remember the old saying.... "It's better to ask permission than forgiveness."

Registered
he did destroy other people property.....some damages are in order.

Registered
They will not do prints for home break-ins or car/bike theft but will for something of this nature????????????
Thing is, this probably would be an effective (???) means of getting peeps attention.

Just saying, it hardly fits the bill of a serious threat to the safety/lives of others to consider this a high priority case.

I am sure the artist satiated a need,if this continued,I could see a problem.
Man ,times sure have changed.

Donating Member
Registered
I like it not that I think it was an ok thing to do, If the construction company wants reimbursement for the barrels harmed in the making of this sculpture I woudl say that is fair as for any other charges I don't really see the need for that myself just goes to show you no one has a sense of humor anymore (Org members excluded of course

Registered
how much do those barrels cost?

Donating Member
Registered
Pay for the damaged barrels, capture the monster and call it a day

Donating Member
Registered
"you play, you pay":
no sympathy here

Donating Member
Registered
he will probably pay for the barrels and go about his business, painting graffiti all over the city where he lives. Costing the tax payer thousands for clean up. What a great guy.
When he destroys my property, I would let him go. Why not? I would love to pay for repairs from vandalism. He's just having fun.
Now I need a tree to hug.

Trekkie said:
he will probably pay for the barrels and go about his business, painting graffiti all over the city where he lives. Costing the tax payer thousands for clean up. What a great guy.
When he destroys my property, I would let him go. Why not? I would love to pay for repairs from vandalism. He's just having fun.
Now I need a tree to hug.

And I bet he says "why dont you go find something useful to do, like bust people who speed on bikes"