This is the oldest motor vehicle car in the world that still runs. It was built one year before Karl Benz and Gottlieb Daimler invented the internal combustion engine.
The world's oldest running motor vehicle has been sold at auction for an astonishing $4.62 million, more than double the pre-sale estimate, as two bidders chased the price up in a three-minute bidding war.
The 1884 De Dion Bouton et Trepardoux Dos-a-Dos Steam Runabout drew a standing ovation as it was 'driven up onto the stage' at Friday's RM Auction in Hershey, Pennsylvania - to prove that this 127-year-old car really does run! - and attracted a starting bid of $500 000, which was immediately doubled to $1 million. Encouraged by the applauding crowd, the bidding went swiftly up to $4.2 million - 4.62 million including the 10 percent commission - before the car was knocked down to an 'unnamed buyer'.
The Dos-a-Dos (Back-to-Back) Steam Runabout was built in 1884 by George Bouton and Charles-Armand Trepardoux for French entrepreneur Count de Dion, who named it 'La Marquise' after his mother.
In 1887, with De Dion at the tiller, it won the world's first ever motor race (it was the only entrant to make the start line!) covering the 32 km from the Pont de Neuilly in Paris to Versailles and back in one hour and 14 minutes (an average of 25.9 km/h) and, according to contemporary reports, hitting a breathtaking 60 km/h on the straights.
La Marquise has only had four owners, remaining in one family for 81 years, and has been restored twice, once by the Doriol family and again by British collector Tom Moore in the early 1990's. Since then, it has taken part in four London-to-Brighton runs and collected a double gold at the 1997 Pebble Beach 'd'Elegance in California'. 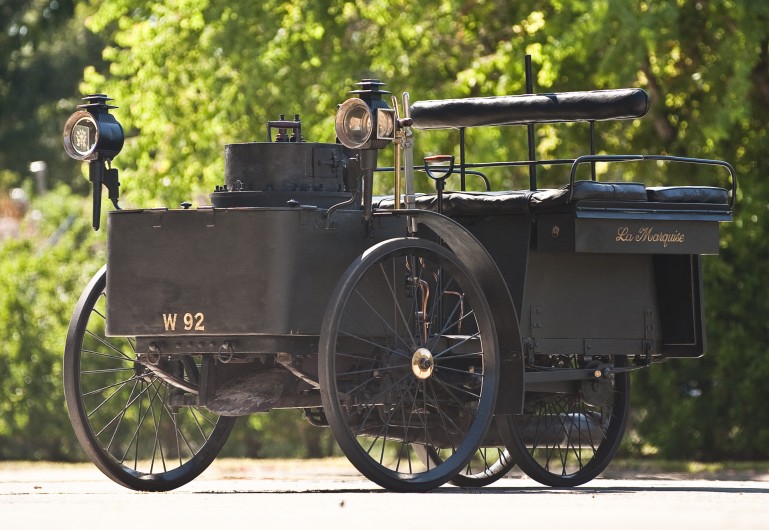 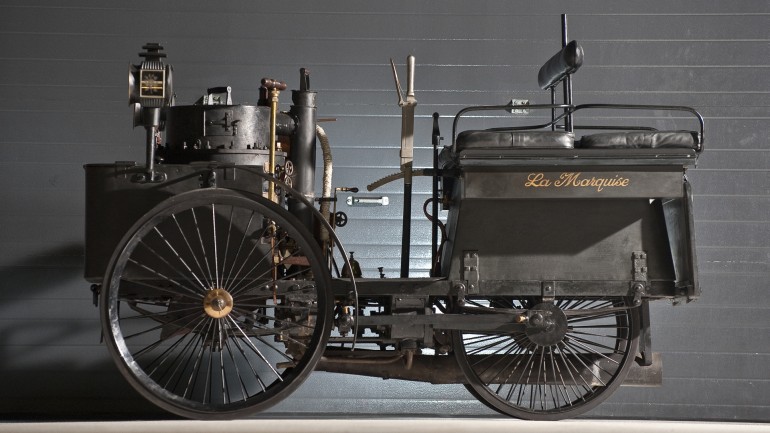 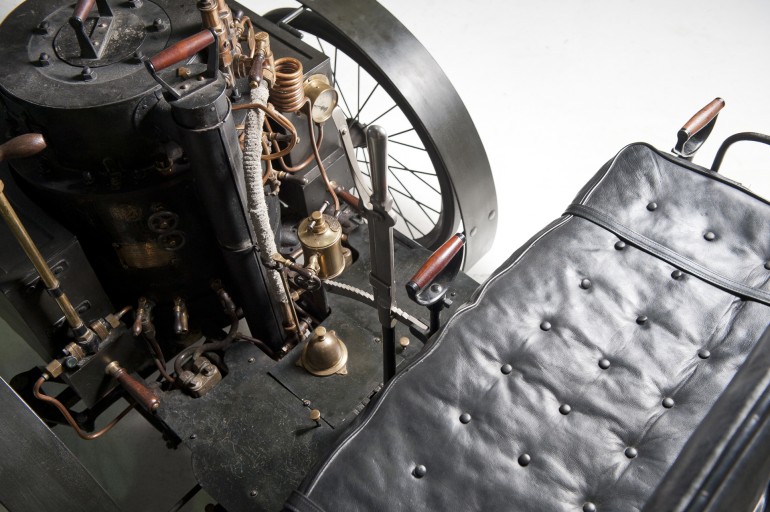 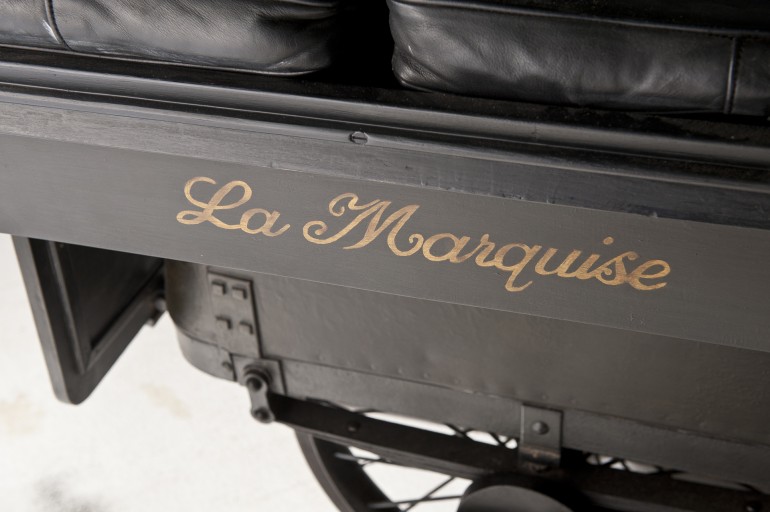 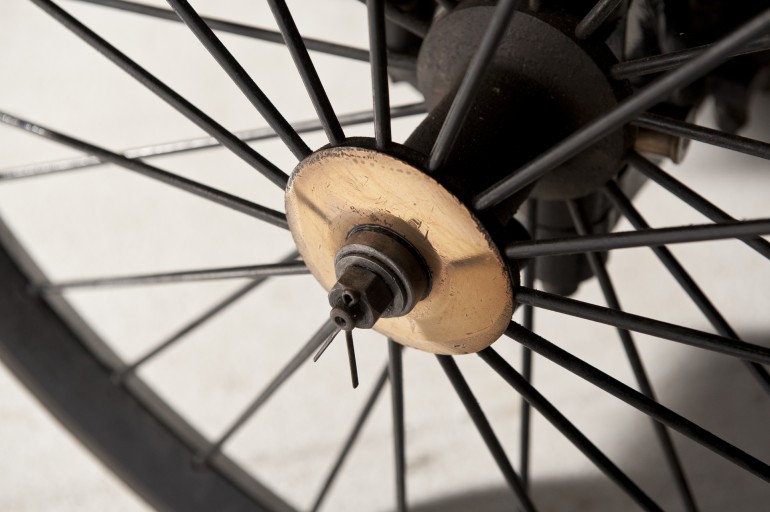 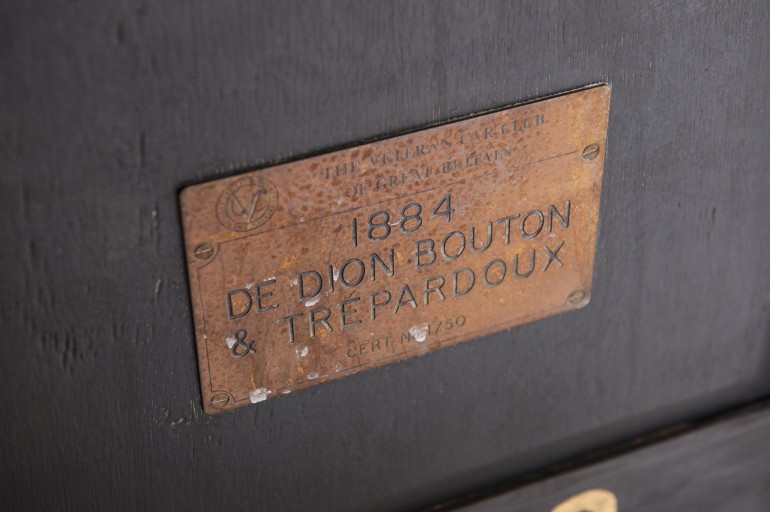 That's amazing...I had no idea! Awesome


VaBusa said:
Good thing it wasn't being stored in a certain museum in Kentucky yesterday

That's amazing...I had no idea! Awesome

Had to go look that up

Donating Member
Registered
That thing is amazing. Thanks for sharing.

VaBusa said:
Good thing it wasn't being stored in a certain museum in Kentucky yesterday

Donating Member
Registered
Now that is cool! Thanks for sharing.

Registered
Thank you for sharing!

Registered
It would be nice to see it in person. Thanks for sharing

Donating Member
Registered
Are those Michelins

Donating Member
What :duh: , NO Bluetooth or GPS :oh: , how did they know where to go

Registered
part of me thinks Jay Leno hired the unknown bidder to buy it. that is still an insane piece if history. hopefully it's around for another 100+ years

VaBusa said:
Good thing it wasn't being stored in a certain museum in Kentucky yesterday

they are starting to recover some of them linky

Registered
You must log in or register to reply here.
Similar threads
Tell us about recent developments in this Covid world.
Hafthor 501kg world record deadlift
Love me all the different accents,dialects and mantras from the world over...
Shrewd investments as world economy collapses [Covid-19]
In this lawsuit happy world we live in...who will be the first?
Get your world news elsewhere
What are your people best known for around the world
Is pot/marijuana legal in yer part of the world?
New to the turbo world
1000hp!!! Just another day in the turbo world
BBC world/Wild New Zealand
Mobile phone, (cell phone) detection cameras live - world first
The Greatest, Fakest World Record
World Leader Jacinda Adern and KIWI Uccints
World's fastest motorcycle riders as of June 2019
Egbert van Popta - Wheelie world record with Busa
Biggest GSXR Collection in the World! MUST SEE ! ! !
Bugatti testing the world's first 3D printed brake caliper
Old Country Cottages and Olde World Charm . . .
Identity Theft and a brave new world.
There’s still good people in this world
There are Still Good People In The World
Hello Busa World From The Uk
World Hayabusa Day India 2016
New To The Busa World
Best Oil Filter In The World
World's Fastest "sit-on" Motorcycle Riders
World's Safest Slingshot----oops
Elevator To Top Of The One World Trade Center
2015 World Yo-yo Championship Finals
Suspension Mods - Out Of This World
World Must Be Ending
Dave at World Wide Bearing
World's Most Creative Statues
It's a wonderful world
Hello from the Harley world...
H2/H2R First Ride from Cycle World
2015 Yamaha YZF-R1 Endurance World Championship Edition
My email to Roadracing World magazine,after reading about H2(R) in January 2015 issue
Lightning LS-218 the fastest production bike in the world - oh and it's electric
Full page Pashnit ad in Cycle World Mag
A Wonderful world
No More Busa! Hello 2014 BMW HP4 World
World History In 2 Minutes
The world lost a great person today
Coming from the cruiser world, how difficult is it to ride and get used to a Busa?
World Superbike *SPOILER ALERT*
what up world gen 1 needs refreshing and improving
Most expensive production motorcycles in the world
another rider lost his life in world super sport race in moscow..
Share:
Facebook Twitter Pinterest