Pretty sure I have met this guy out at bike night recently...its a terrable tragedy, my heart goes out to the family


A South Bend man is being mourned by his family after a terrible accident on the Indiana Toll Toad.
The accident was early Saturday morning.
Police say 51-year-old Paul Sturma hit a deer and was thrown from his motorcycle. He was pronounced dead on the scene.
It happened near the Michigan City exit in the westbound lanes near mile marker 42.
Family members say Sturma spent any of his free time riding his bike.
â€œHe was just a really, really good guy and he'll be missed by a lot of people,â€￾ says Sturmaâ€™s ex-wife, Lisa Sturma.
Witnesses told police a few deer ran across the toll road and he couldn't avoid them.
Sturma had his Harley for the past 16 years and loved to ride.
He was heading to St. Louis with a buddy to visit his grand daughter for her birthday.
Family members say he was a big man with a big heart.
He leaves behind eight children and eight grandkids.
The friend riding with Sturma is expected to be okay. 48-year-old Steven Reimondo of Cassopolis was also on a motorcycle but able to swerve and miss the deer.
Reimondo was wearing a helmet but Sturma was not. 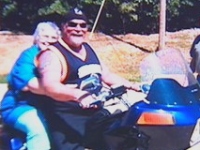 Registered
The Toll Road was closed for several hours Saturday morning due to a motorcycle accident which killed a South Bend man.
It happened around 5:30 a.m. Central time on Saturday, near the 42 mile marker westbound. That's just before the Michigan City exit.
Indiana State Police say 51-year-old Paul Sturma, Jr. of South Bend was riding his motorcycle, when three deer ran across the road.
Sturma hit one of the deer, and was thrown from his bike. He was pronounced dead on the scene.
He was not wearing a helmet.
Police say 48-year-old Steven Reimondo of Cassopolis was also on a motorcycle. He was able to swerve and miss the deer, but he was also thrown from his bike.
He was wearing a helmet and was treated and released from St. Anthony's Hospital in Michigan City.

Registered
When one rides without a helmet, more times than not they are only allowed one get off!

Donating Member
Registered
I know Djsin knows this but that stretch of road has had terrible problems with deer on the road.. The feds even came in and put an "early" warning system in to detect deer on/near the road to the tune like 1M$ . Radar guns detect deer and turn on flashing warning lights.. (did not work very well)...

Registered
still doesnt work very well, they have them all over 80/90 in ohio to

I'm somewhere but dont know where

Donating Member
Registered
sux for the family of the rider... sounds like a helmet *might* have prevented this horrible accident.

Registered
Condolences to Pauls' family, RIP big guy...
was out riding this weekend with my bro' ('09 'busa) & a few m8s....my bro' had a HUGE get-off at approx. 140km/h, catapulted 3 metres high & flew 35 metres (right in front of me). Had all the gear on (full leathers, boots, high qual. helmet). Landed head first into tarmac....(visor ripped clean off, massive scrape marks on top, side & chin area of helmet).
He is recovering now with massive bruising to stomach (torn stomach muscles) & back area.....NO HEAD INJURY WHAT-SO-EVER !!
Witnessing this accident happen RIGHT in front of me....I have no doubt at all that his gear (especially his helmet) saved his life

!! I continually thank my god that I still have my brother today......just some food for thought