Registered
Hey guys I just had a question about the shorty exhaust. I have had a pair of the tailwindz and really didnt care for them. They didnt mount up to great had to move the kick stand around a little. I know ppl have problems with the hottbodies to. I was wondering about maybe either voodoo or that loud humgours that guy that sells on ebay? Any thoughts guys and the fitment on these? Thanks

Donating Member
Registered
The Lord Humungus are nothing more than Heddman Exhaust Tips, You can get them at Summitracing.com I have a set on Misty and I love the sound, I did have to have a sleeve made to fit. It was so easy the guy didnt even charge me.

Registered
Demmym had a pretty good solution. I would go with what works.

Registered
I installed Hotbodies Shorties on my '09 and it went very well.

I was surprised because previously, I had a 2007 GSXR 1000 and had issues with the kickstand smacking part of the megaphone. During one of its trips to the shop, a guy took some heat to the stand and bent it a bit so it wouldn't touch anymore.

I think the key is just rotating the megaphone a bit once its been pushed into place. I had to play with it a little bit but now its perfect. I wish I was at home. I'd shoot a pic to show you the spacing. I won't be for another 2 weeks.

Registered
These are the ones I picked up Link off ebay. I like them, sound pretty good & inexpensive. Kickstand does hit the pipe a little but dosen't really bother me.

Registered
Can kind of see how it hits... 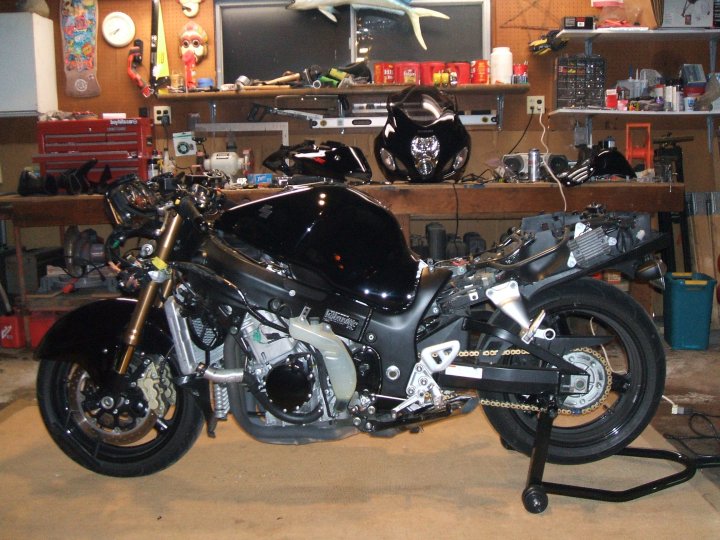 If you will take your kickstand and drill and tap a hole where the kickstand is supposed to hit you can place a small bolt in the hole and back it out just far enough to hold the kickstand off the exhause, I had to do it on my stock kickstand, Then when I bought an aftermarker it already had the bolt in it.
You must log in or register to reply here.