Donating Member
Registered
My ten year old Son has fallen into Daddy's footsteps. He loves the Busa and asks to ride every time I go out. I frequently take him and lately he has aggressively been after me to get him a dirt bike. I have been checking Craigslist and waiting to see what I could find. We also live in a residential area and have no real place to ride but the roads and sidewalks in the neighborhood. Yesterday I was checking online and found a Murray Track 2 Mini Racer for $250 bucks and only ten minutes away. I called to see if he still had it since it was listed on the 8th of this month so was likely to be gone. I called and left a message and several hours later, he called me and left a message that he could meet up today. I never told my Son about it at all.

This morning, we got up early and took a 40 Min ride on the Busa. When I returned I noticed I had a message on my cell. I checked it and it was the dude with the Mini Bike. We spoke and I grabbed my Son and we jumped in the car to go "check out a new helmet for me", that's what I told him we were doing. We arrived and the guy was cool and the bike looked better than I expected. He fired it up on first pull and I drove it around the block. Meanwhile, my Son certainly was wondering what in the world was going on. I returned from my spin and asked the guy if he would barter on the price and he agreed. I offered him $200.00 and he took it. We loaded it up and took her home.

My Son was so happy and excited on the way home it took me back many years to when my Grandfather bought me me first Mini Bike. What elation and excitement at that age! Well, we got home and I put a new plug in her, changed the air filter, checked her over and he and I had one of the best days of my life! Spending time teaching him to ride his first motor bike was so rewarding and just made me feel fantastic. It was 100 degrees here in FL today but he was geared up and rode all day while giving me a sporadic spin to cool down! He is a natural! He is turning with excellent ability and keeping his head turned where he wants to go. He is doing figure eights already on a narrow road with room to spare and never touching down with his foot. He made me so proud and this was one of the best Father Son bonding experiences we have ever imagined.

My Fathers Day is now complete a week ahead of time and I can't imagine the thrill of things to come as he progresses. What an awesome experience and what a perfect day! I couldn't have imagined it would be so good. I feel I got a great deal on this little scoot and it's pretty darn fun to run around on, even for me. I just had to share this experience as it was just too cool to keep to myself! I hope you guys have as much fun on Fathers Day as I was blessed with today..... 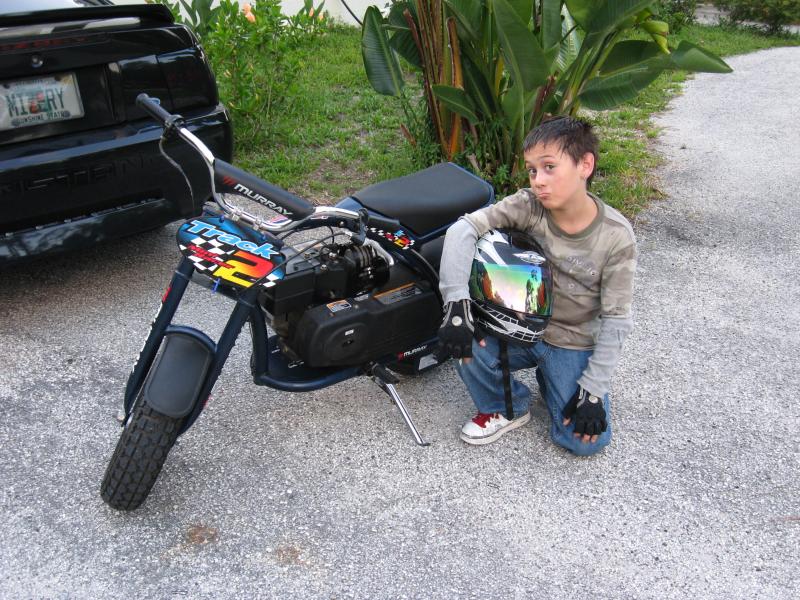 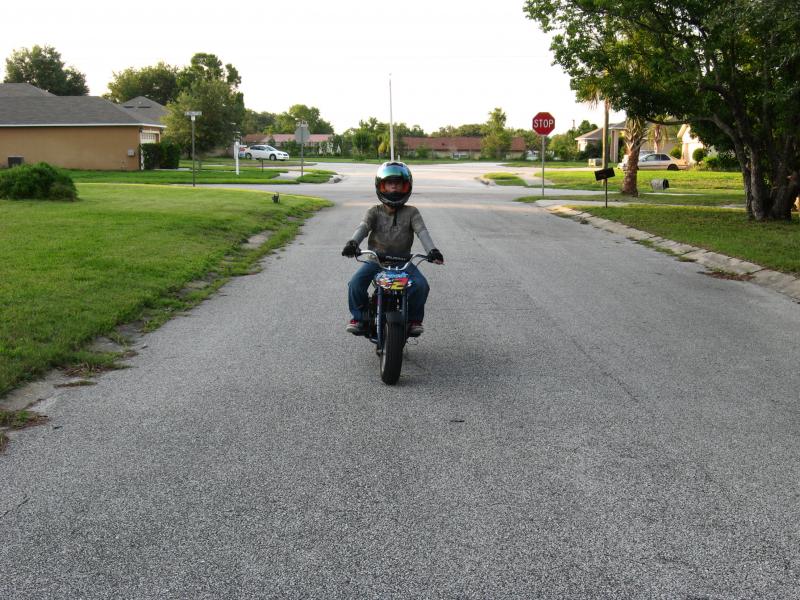 Donating Member
Registered
Nice... Great pics.. Glad you got to share this experience with your boy.......

Registered
Oh,thats so cool.. What a big guy,and so cute.. Great pics.. Have fun big guy.

Registered
nice blacked out mustang gt in the background, too!

denon970 said:
nice blacked out mustang gt in the background, too!
Click to expand...

Thanks, that's my cage!

Registered
Great pics and glad you could have that experience go from what you say. A perfect day! Cant wait for my girls to get old enough!

Registered
Thanks for sharing

PS: Get him a jacket or pads. 10 years old = he'll start pushing his limits

Noltez said:
Thanks for sharing

PS: Get him a jacket or pads. 10 years old = he'll start pushing his limits

We are getting him gear. He needs it and he wants it so it will happen!

) but my 2 young (3 & 4 yr old) nephews are confirmed future 'busa pilots !! they already know the 'busa is the worlds' fastest m/cycle....and they tell anyone (& everyone) within ear-shot

) and he loves it....
these boys have got the bug and they've got it BAD !!
Can't wait to see this next generation of 'busa riders out there & havin' fun !!

That lid looks a few sizes too big for him. He can almost put his head through the visor opening.

Donating Member
Registered
my oldest is about to graduate from High School and iwould give anything for a couple more days with him when he was your sons age. Great pictures.
Posted via Mobile Device

Donating Member
Registered
Congrats to both of you. That's great!