My Gen2 Blues, my dealer suks!

Donating Member
Registered
Since i purchased the bike it has 58 miles on, here is the original post, https://www.hayabusa.org/forum/general-bike-related-topics/176512-new-ride-finally-here.html

I bought the bike a month ago, and waited for the dealer to do the recall.
They finally got it done, incorrectly, the bike has no rear brakes!
I took the bike back to the dealer again, only to get the run around and still have no rear brakes.
The problem is the Mechanic that works there is all by him self, and he he is overwhelmed, witch leaves me screwed.
They have had the bike for 3 days trying to bleed the brakes,,
Saturday morning i called the dealer, and was told that the mechanic had drained all the fluid out, and was going to start from scratch, thats when i told them to assemble the bike and i was coming to pick it up, and told them i didn't think that they could fix the bike.
I picked the bike back up in the trailer on Sat, i dont think that the dealer is confident or capable to fix it.
So when i get to the dealer, im expecting to have no brakes at all, because i was told that the brake fluid was drained by the salesman, that was not the case, the only thing i could see, is that they tried to bleed the front brakes because there is fluid on the front wheel. Not as i was told that the fluid was drained.
I feel like they where just blowing smoke,, im soooo pissed, i had the the choice of dealers, one in town and one 15 miles away, and boy did i make the the wrong choice!
It's not rocket science here, it's bleeding the brakes correctly!
Now at this point i have done what Suzuki customer service told me to do, i gave the dealer a chance to fix it.
That clearly didn't work,,,
So the bike is at my garage now and o will fix it myself.
It really suks having a new bike that is not safe to ride!
As well as the first payment has been all ready! 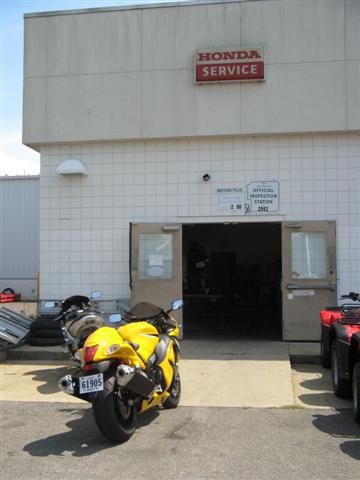 Donating Member
Registered
sorry to hear about that and i wouldn't buy a damn thing from them in the near future. talk about a kick in the nuts.

I'm sure you'll have her up and runnin' in no time they way it should of been in the 1st place. i guess Suzuki really doesn't care about there customers.

Registered
They might be Best Cycles but they seem to be Crap Service...

Donating Member
Registered
I have sent a friend request the there Facebook page , but ni reply as of yet, as well as no activity since 2010! Dam

Donating Member
Registered
If brake fluid got on the tire I would want it replaced too.

Donating Member
Talking maintenance to you is kind like someone trying to tell Chef Gordon Ramsay how to cook!

that's the best one I have seen in a long time

Moderator
Donating Member
Registered
I am sorry, that really sucks.

Registered
Idiots. I have two dealers near me. One is 8 minutes away and one is 35 minutes away. I go to the one 35 minutes away because they know what they are doing and are good to work with. I had to find out the hard way that the one near me has 2 week wait times and charges me through the nose for every little thing. Sorry for your issues.

Registered
At least yours did not come with the powdercoat on the frame all jacked up!

I cannot believe that a dealer would

1. Leave brake fluid on a tire/wheel
2. Not know how to bleed brakes!

Give me the backyard mechanic anyday of the week

I was cheap, so all I got was a lousy t-shirt

Registered
mine goes in next week for the module replacement, was talking to the mechanic and he said Suzuki allows 1-1.5hrs for the module swap. He asked if he could have it for 2-2.5 hrs. so we will see, at least they know how to bleed brakes there. All this because of miss aligned assembly causing an aluminium chip to block a hose.

Registered
at least you got it back

Registered
Don't get flustered John. Patience is a virtue!

Registered
Always fix it yourself. At least you know its done right. Only time I ever took mine in was to get a recall done. That was once. After that I learnt to do it all myself. Best thing I ever did.

Yeah, good luck with that...

Moderator
Donating Member
Registered
no wonder they couldn't fix it, you took it to the wrong door...that says Honda service, you want the next one that says Suzuki

you'll get her up and running soon

Oren Ishii Is Ready To Roll!

H
dealer found the problem with my bike today