Donating Member
Registered
A new world champion today and he was not even on the podium .

Good job Casey Stoner ! Three races left and the championship is sewn up .

Another record of sorts was broken . First time in 32 years a european motorcycle make has won the world title and it did at the Japanese Grand Prix

Hoping he " Loris " wins at Motegi next season as well . If so it might mean he got a good grip on setting the Suzuki GSV-R up to his style .

Bridgestone came to MotoGP in 2002 . Their first world championship as well .

Registered
The Goliath's have been slain. Go David

What a weird race

These "wet/dry" races are crazy. Wet, then a dry line, then dry. Really puts the emphasis on who's got the steel balls because the pavement grip is changing from lap to lap.

Dissappointed with Rossi for pitting after his front tucked, Rossi man, your tire is cold! Stay out there at least another lap

Oh well, at least DePuniet scored me a lot of points coming in at 2nd!!

(Charlesbusa @ Sep. 23 2007,12:58) Dissappointed with Rossi for pitting after his front tucked, Rossi man, your tire is cold! Stay out there at least another lap

Amen, what kind of rookie move was THAT?!? He should know better, threw it away at that point...

That was one CRAZY race, pit, no pit, pit, no pit- Loris showed his experience and balls in this race.

Well, next three should be something, nobody has anything to lose so ALL of them should be out there to WIN, no more covering your azz to make points... 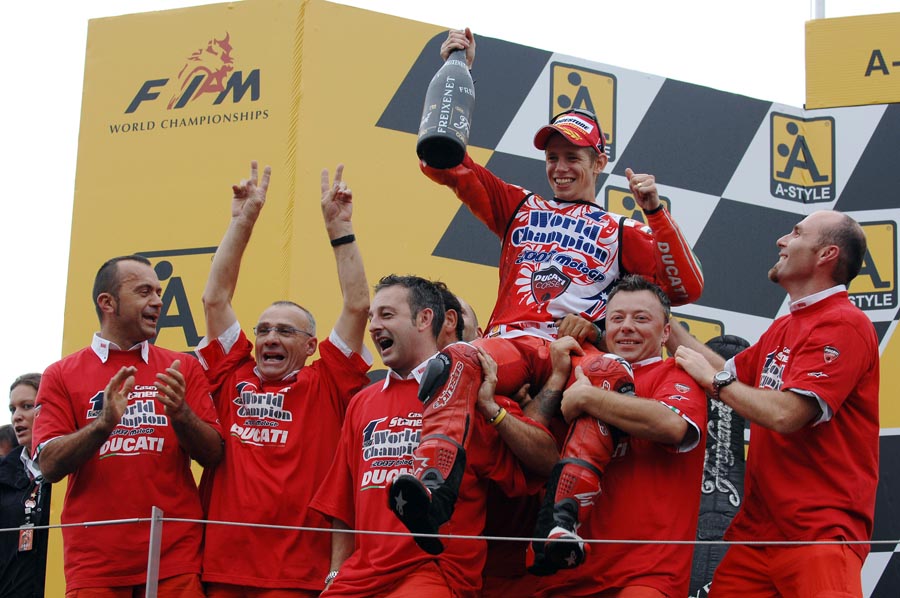