Donating Member
Registered
Friggin A!! That is a good ride ! How you feeling ?

Donating Member
Registered
what was your milage at 24 hrs?

frisbee said:
what was your milage at 24 hrs?
Click to expand...

That's just where it ended up! To keep with Iron Butt rules, I had to make one last gas stop inside the 36 hour mark, to get that last gas receipt with the time stamp on it. That total will likely go down officially as the Busa odometer is likely not perfectly accurate. My '08 is 6 high on the speedo.

mr8ball said:
Man that looks like such a great ride. Ware the tow red bottles on the back? Extra gas maybe.
Click to expand...

Those are MSR Fuel Canisters you can get at REI. They fit nicely under the Ventura Rack. I was carrying an extra gallon of fuel which gets the range up to about 300 miles. Running around the American Southwest, can't be too careful.

There's a trick with the Busa since you can't get it full of gas. Stand the bike up level and slowly pour gas in with a bottle or can, whatever. I was able to get another 3/4 of a gallon in the tank that way.

Registered
To lite the pipe at nite. HE HE.

Goal was to get to Monument Valley. Always wanted to go there, pics can do the talking.

Left Fallon at 3:15 & across the Loneliest Road in America. 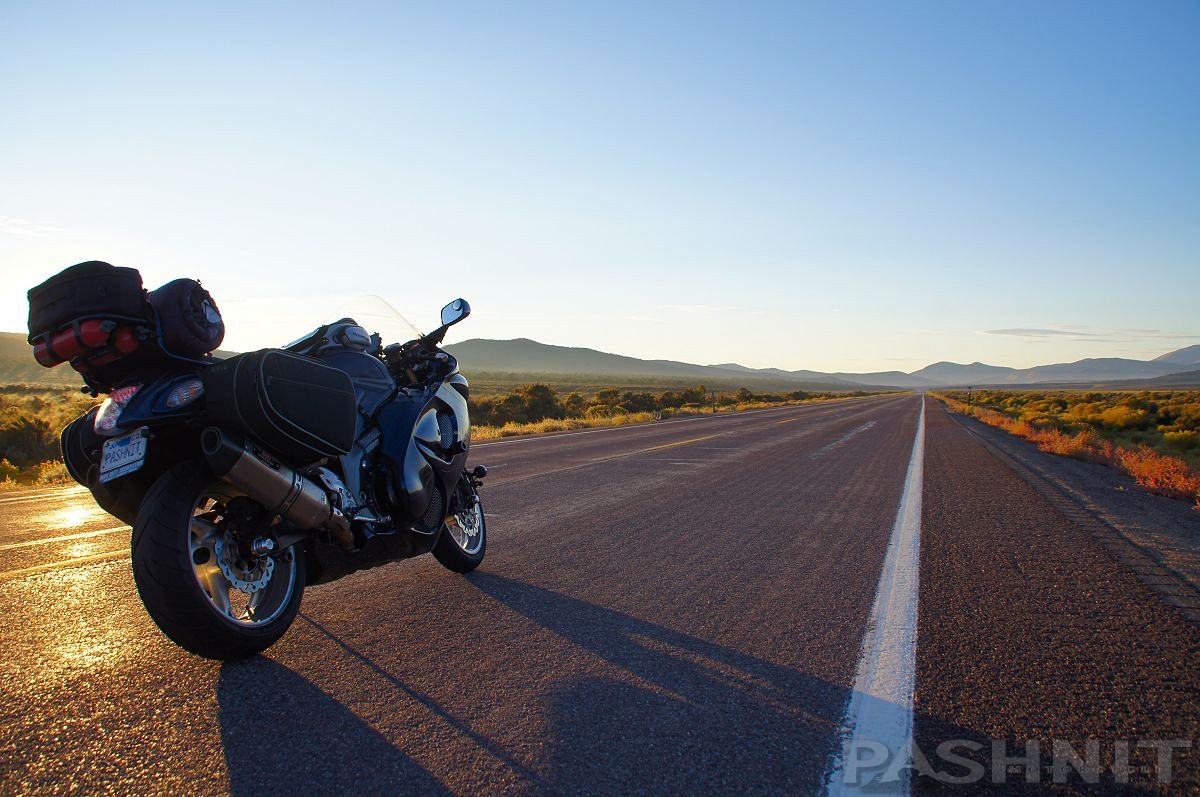 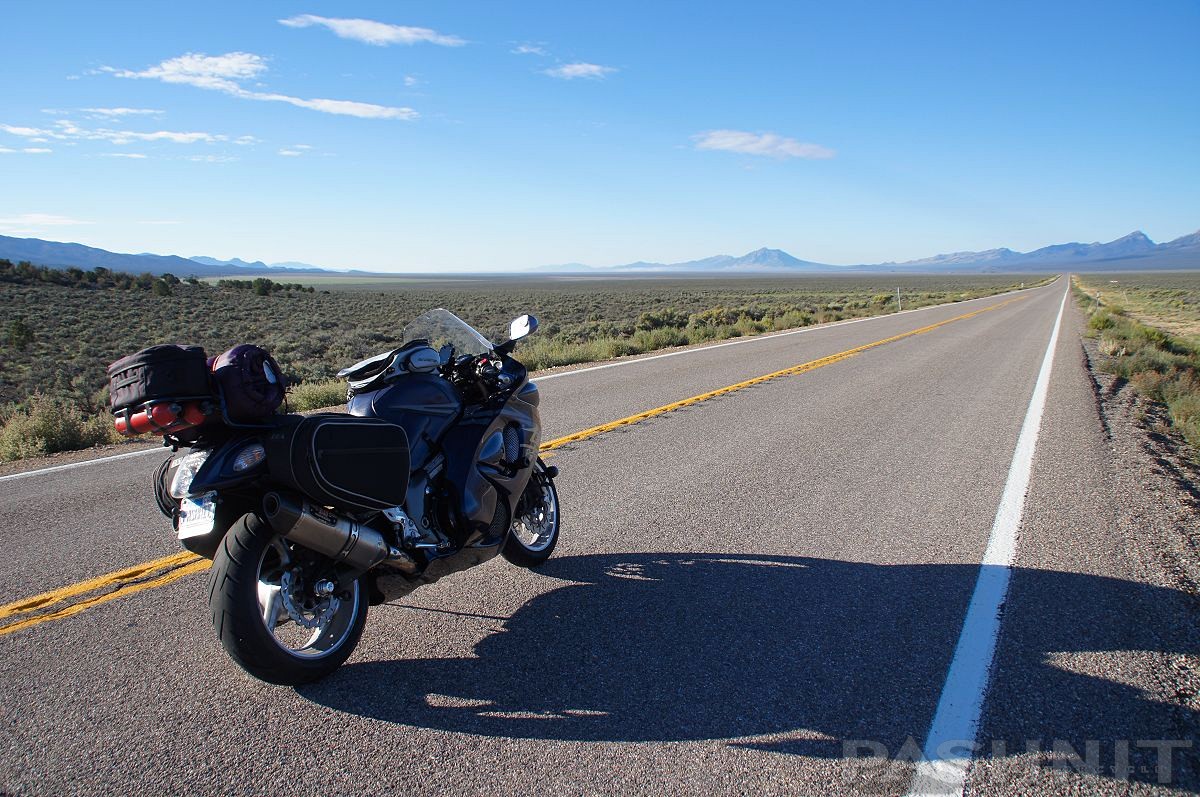 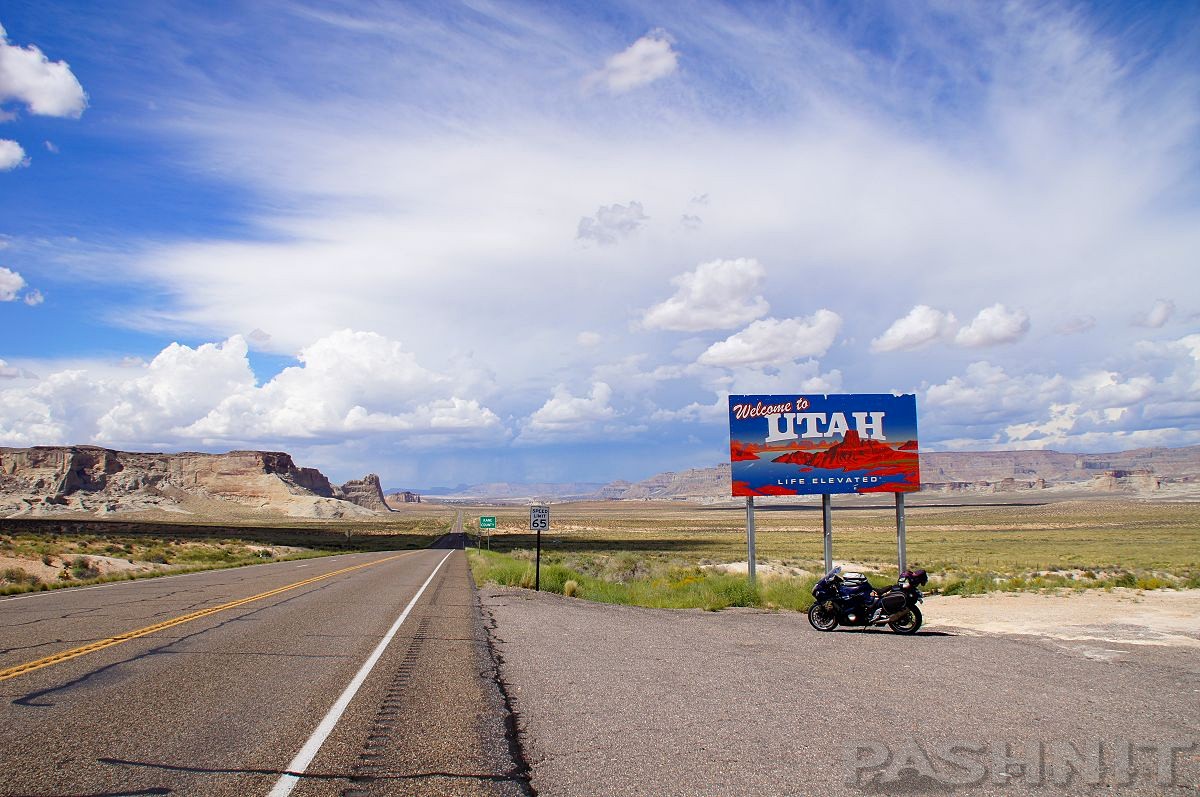 Nice pics! This is an awesome feat but even more so when you consider the miles you ride everyday for your "job". You are a hella Hayabusa rider to want to do this ride in the time off off from your usual touring. Congratulations!

Donating Member
Registered
Thanks for the AWESOME pics!

Registered
Hey Tim, great picture - as always. I was really impressed with the picture against the Sun. Did you use manual settings on your camera?

Another set of questions - how fast were you going on those lonely roads? Ever fell asleep doing triples? How many hours of actual riding?

Site Sponsor
Registered
Ig, on the camera, I'm on full Auto+ setting. No time to think about settings. I have a Sony A350 with 17-200 lens which is great for travel. Traditional DSLR is becoming more and more rare. But I'll take 4-6 photos in a radius around the bike to do one shot - which is a tip for travel bike photos - take lots. 1 will be good. Rest will suck.

Self-portrait shots are done with the Contour taking pics every three seconds. That actually worked, putting it on a post, just letting it run.


For the IBA Bun Burner 1500 ride, I planned 6 hrs off the bike to sleep- so 30 hours on the bike w/ breaks/gas stops. So need to make 50 miles/per hour. Fast sections (Nevada) averaged 65 miles each hour, slower regions with towns averaged 60 miles/hour. Gas stops were 5-20 minutes & I got gas 12 times. 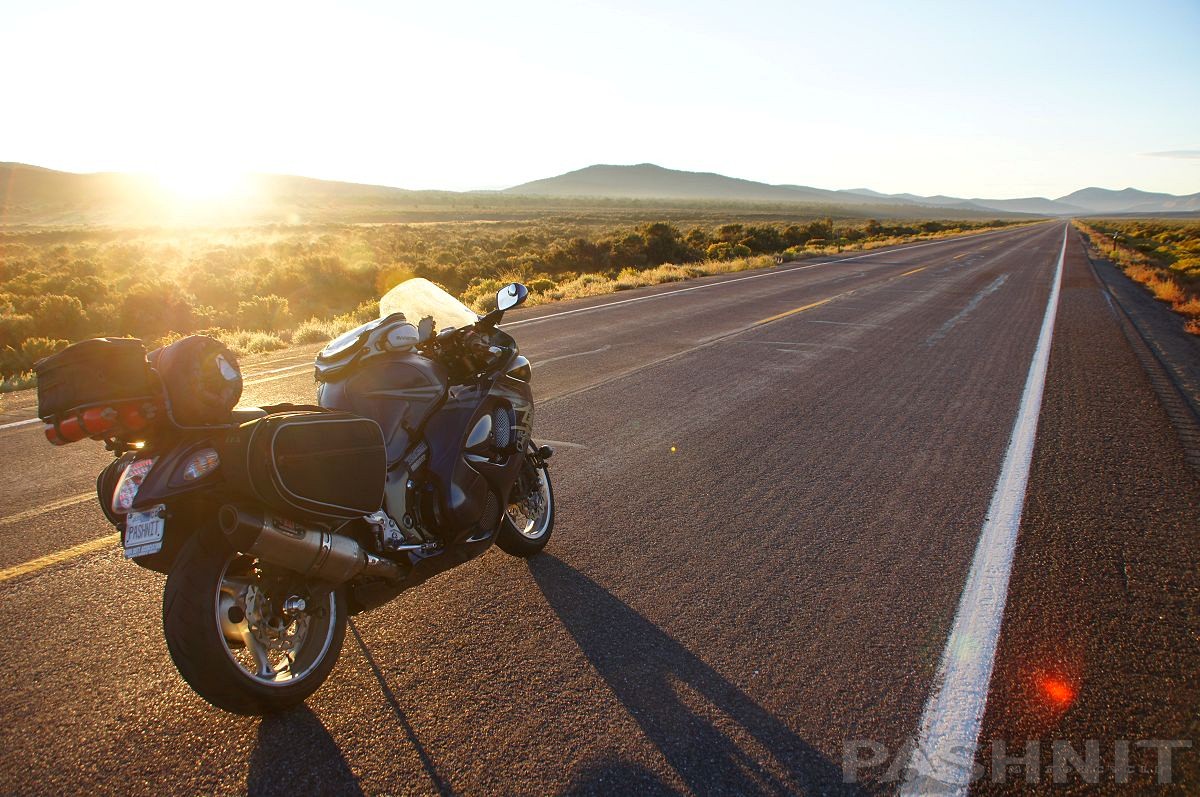 Site Sponsor
Registered
You eat on the bike, so I'm barreling through granola bars is my thing- I brought 20 of them. Easy to shove up in your helmet. For getting sleepy (it happens), I carried two big packages of cherry Twizzlers in my tankbag- reach in, pull one out. Excellent for moto-travel even though I normally never eat candy or sweets. Shove those up in your helmet, chewy! Dried fruit was mango - so I can shove those in too. - Anything chewy. 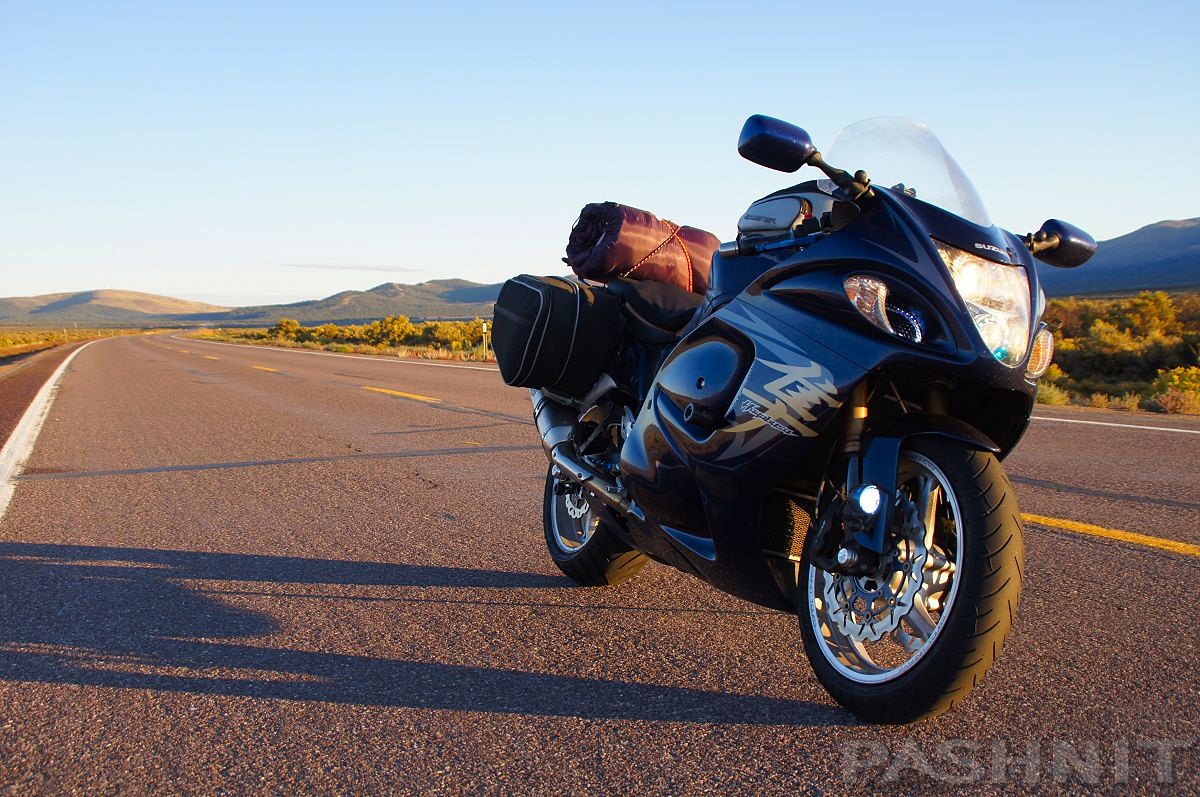 Site Sponsor
Registered
Speed is always a big issue on IBA ride - mainly b/c Nevada is middle of nowhere. Never saw a cop anywhere outside towns. Arizona & Utah, they were everywhere- or rather in very predictable places.

Adaptiv Radar saved or alerted me SEVEN separate times. People that say radar detectors don't work, that's all bullsh!t. It was amazing, and caught stray radar waves three separate times as far as 1-2 miles away. I actually called the owner of Adaptiv after the ride to ask about that.

Audio alert in my helmet works best for me , and learned to slam on brakes when it went off, sure enough, there he was. Adaptiv Radar also offers BlueTooth if your helmet is set up for that.

Speed limit is usually 70 just about everywhere, sometimes 65 on country roads. So I'm running 10 over, about 75-80, Middle of Nevada about 80-90. If you go too fast, you burn through your gas too fast and mpg drops big time. I got an average of about 48 mpg overall. Not bad for those speeds. On IBA attempt, steady is best. 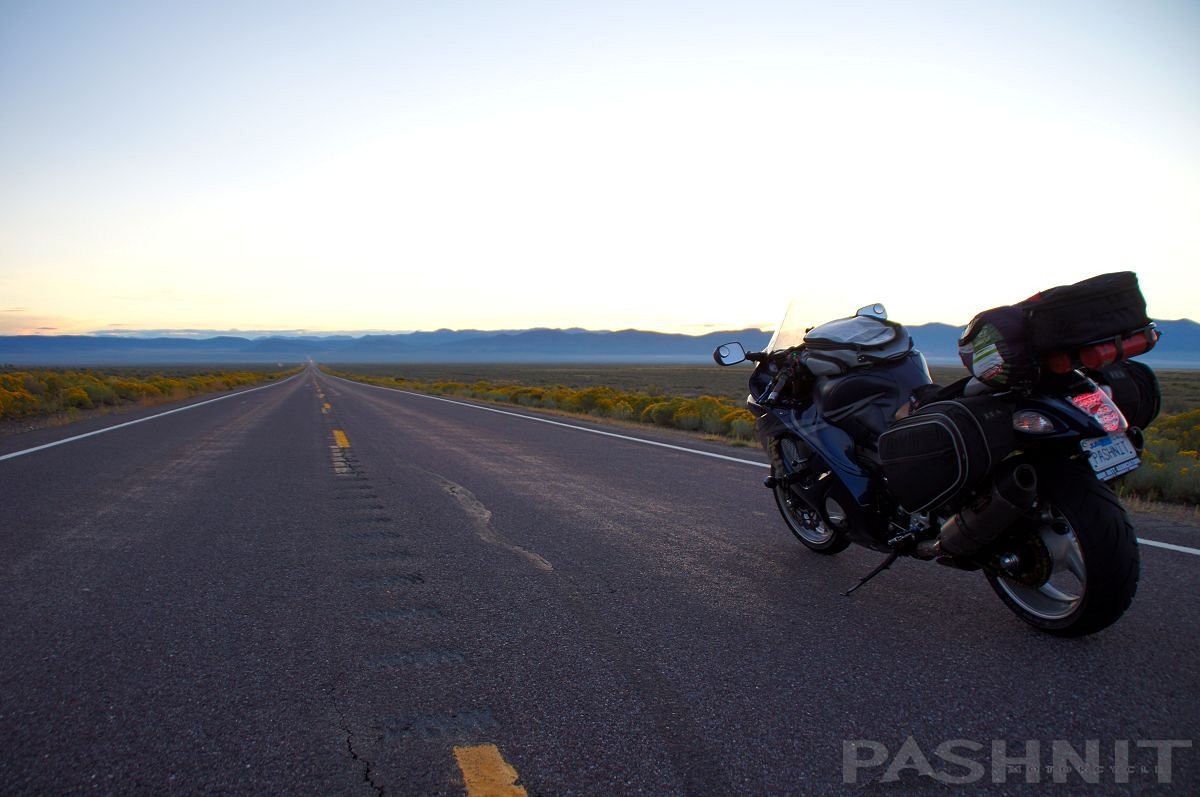 Registered
Fantastic, & in all that traffic.....

Staff member
and you STILL had time to stop and take pictures...

Registered
Congrats bro! I'm trying to do 500 miles in a day. I got a long ways to go.

Haven't posted up some Pashnit Trip Pics in a while
2