Donating Member
Registered
AVONDALE, La. â€“ A Navy assault ship built with tons of steel salvaged from the World Trade Center towers began its journey to New York on Tuesday, sailing down the Mississippi River in a pea-soup fog as watchers along the levee strained for a glimpse.

The USS New York, named to commemorate the Sept. 11 terrorist attacks, left the Northrop Grumman shipyard where it was built for the trip to its namesake city. The $1 billion ship will be formally commissioned in New York in early November.

The New York is 684 feet long and can carry up to 800 Marines. It has a flight deck that can handle helicopters and the MV-22 Osprey tilt-rotor aircraft.

Four tugboats performed an intricate set of maneuvers to pull the warship from the dock at the New Orleans-area shipyard and turn it 180 degrees toward the waters of Gulf of Mexico. An armed Coast Guard speedboat and a helicopter flying overhead guarded the vessel. The ship will sail through the Gulf and around Florida before turning north and continuing to New York.

Deputy project manager Doug Lounsberry said the vessel was important to the builders, because it honors those killed in the terrorist attacks.

"It's like raising a kid," Lounsberry said. "We're sending this one off to college. But after they leave, they remain near and dear to your heart."

Farther down the Mississippi, hundreds of people lined up along the river bank to watch the ship pass. Around 9:45 a.m., a man called "Here she comes!" prompting well-wishers to raise U.S. flags and camera phones, as the hulking warship emerged from the haze.

Tourists Dorice and Victor Brown and Christine Cox, of Sterling, Va., were getting coffee and pastries at a nearby cafe when they asked about the commotion and decided to check it out for themselves.

"It's awesome for anything so tragic to be so uplifting here," Cox said, just after the ship had passed.

Brian Corcoran, a mechanical contractor, brought his four children, who range in age from 12 to 5. He figured they might be a bit late for school but was OK with that, given the importance of the occasion.

"Hopefully, it's going overseas to do damage to them like it did to us," he said.

When terrorist hijackers crashed two jetliners into the World Trade Center on Sept. 11, 2001, destroying the twin towers and killing nearly 2,800 people, the ship was already on the drawing board. In September 2002, the Defense Department announced the selection of New York as the ship's name, honoring the city and state and those who died in the attacks.

About 7.5 tons of World Trade Center steel was melted at the Bradken Inc. foundry in Amite, La., and used in the New York's bow.

The New York revives a name held by at least four other Navy ships, including a Spanish-American War-era cruiser, a battleship that served in World Wars I and II and a nuclear submarine retired from the fleet in 1997.

The ship is a San Antonio-class amphibious dock vessel. The first four ships in the series â€” the USS San Antonio, USS New Orleans, USS Mesa Verde and USS Green Bay â€” are in service. Four other ships in the class are under construction: Somerset and Anchorage at the Avondale yard, and Arlington and San Diego at Northrop Grumman's yard in Pascagoula, Miss.

Arlington and Somerset also carry names connected to the Sept. 11 attacks: Arlington for the attack on the Pentagon and Somerset for the Pennsylvania county in which United Airlines Flight 93 crashed after being hijacked.

Donating Member
Registered
Thanks for sharing... any pics of this event?

Donating Member
Registered
Check out the website.
USS New York LPD-21 | A ship forged from the steel of the World Trade Center 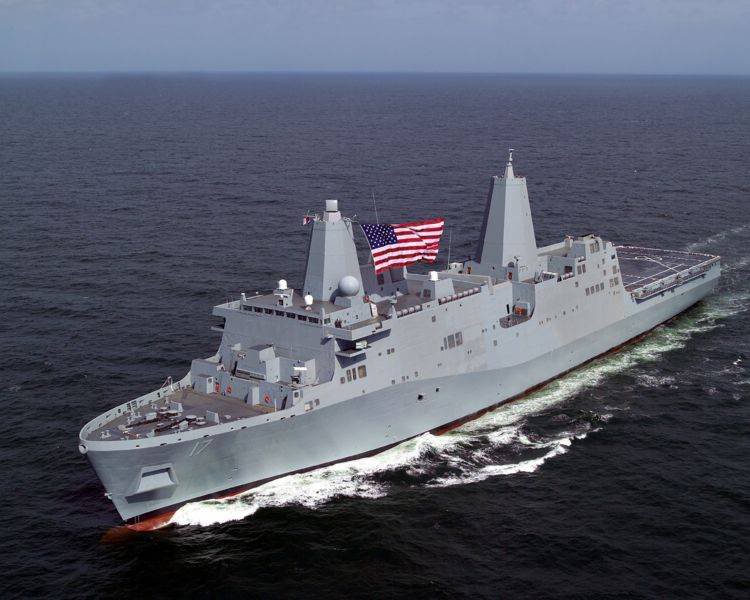 Registered
One of the 1st "stealth" ships to join the fleet

Donating Member
I'd rather have used the steel in bomb manufacturing....

skydivr said:
I'd rather have used the steel in bomb manufacturing....
Click to expand...

humm maybe they have and we just dont know it...

thanks for sharing a good story, thats a pretty cool looking ship too...

Donating Member
Registered
Not too stealth with that huge US Flag on it.. i guess thats so the enemy knows who is about to b#$@ them in the a**... ehehe j/k

What a gorgeous piece of machinery.

The artist formerly known as BHG

Registered
Me and my FD brothers are planing on being in NYC for a party when she comes in.

Should be around beginning 1st week of Nov

Donating Member
Registered
Have a great time my brother

The picture is the USS San Antonio. She is the Name sake of this ship class.
She was the first. The USS New York is the next one to roll out with 2 more to follow.
The picture was posted to demonstrate what this lovely lady looks like.

You must log in or register to reply here.
Similar threads
Never Let Anyone Else Ride Your Busa
Never let your guard down when parking a Busa
never let your guard down
Never Again will I let anyone else work on my bike
Never let a Woman change your oil
I need help.LOL.Let me re-phrase. INFO NEEDED from a MOD/ADMIN/Member
Let me tell you a secret
My Wife Loves Me- Let Me Count The Ways
Let there be smoke, Yosh R77 installed
Let The Christmas Decorating Begin
What happened here? i will let u know...
Time to let her go
Let The Adventure Begin!!
Let's see... How long is your daily commute?
Let those unused parts GO!
Check in, let's make sure everyone is here...
First Down.. Let's Hope Last One
Dare You Not To Let Out A Small Giggle, Too!
Take Advantage Of Our G R E A T Weather ~ And Let's Meet Up For A Nice Ride . . .
'busa K1 Unlimited And Now Let's Run :)
Black & Blue Suzuki Hayabusa ~ Let's See Pictures Of Her Now . . .
Let's Back That Up And....
Why you don't let people work on your bike!!!!
I made a custom fairing design... let me know what you think.
Super Excited!!! Let the mods begin!
I Let my rider down...
Let's play Where is Lurch?
Okay folks, Christmas has passed let's see the big boy toys...
Let's talk gloves
Let's talk radar detectors and their setup
Server is online post here and let us know if you have issues:
Maybe I'm loosing it as I let out the clutch I here a tic as I roll in 1st gear.
Woo Hoooo!!! Let the build commence!!!
Let's see your exhaust
Let's argue about helmets....
Check in here... Let's make sure everyone has made it over to the updated forum
Let me upgrade ya!
GROUP HUG Let's tell some stories.
Let Rubb help you get to the track....
Calling all black Gen IIs : Let us see'em!
Calling all Solid Black / Metallic Gold gen2 let's see them
Calling all White Gen IIs : Let us see'em!
Let me introduce my newest best friend.... Clutch
So let me get this straight....
Let the adrenalin get the best of me
So let's play "Where Has Revlis Been" and what the hell has he been doing...
Really hard time,very emotional...but I had to let her go today
Let's be careful out there!
Just wanted to let you know:
Let the party begin...SIKE!
Share:
Facebook Twitter Pinterest