King Of The West Coast 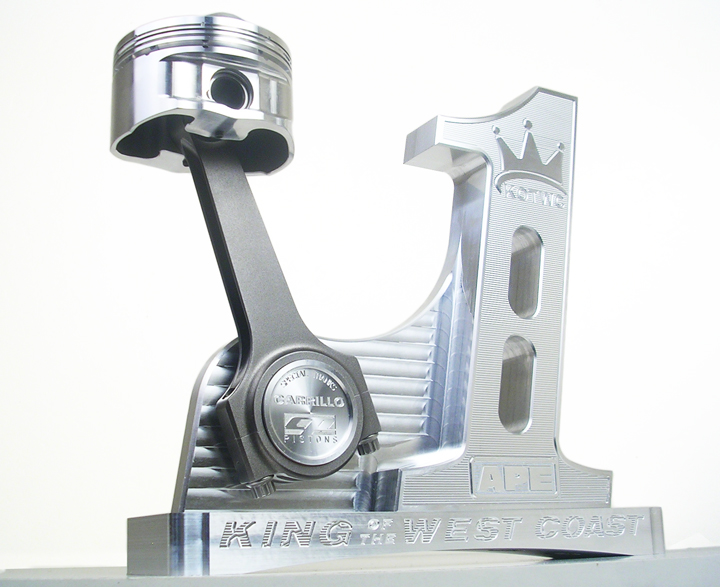 Next month, August 14-15, West Coast Dragbike Association will be running their "King of The West Coast event at California Dragway in Fontana, Ca.

It has been a year trying to get this event off of the ground. Previous attempts were rained out. Then scheduling conflicts arose, but that is now solved.

A year ago, Big Charlie from WCDA called and asked me if we would sponsor this event by making a pair of custom trophies. AS APE is widely known for CNC machined race parts, Charlie ask if we wouldn't machine something out of billet to be unlike anything ever offered racers before.

Our design staff got to working on this and a number of ideas were done up in CAD and debated. Finally the idea came up that would require support from a couple of APEs top suppliers. A phone call was made to CP Pistons and Carrillo and the idea pitched. Cindy at CP/Carrillo jumped on board and asked what we needed.

These trophies have now been finished for nearly a year and only the staff at APE has seen them. Now, however, with the demise of AMA Dragbike, we thought we would release this photo, in case any of the east coast guys would entertain the thoughts of coming out to Calif. and taking these away from the west coast guys.

As you can see, the entire trophy is machined from billet, and yes, that is a genuine Carrillo rod and CP piston on each one. The photo doesn't do it justice. You have to see it in person.

There will only ever be two of these awarded. We will never make them again.

East coast guys, what do you think. Would one of these look nice in your collection? Do only the west coast guys deserve to have something this nice?

Can't say you didn't see them in plenty of time to get to the event.

The ball is in your court.

King of the west coast will have two classes. Both heads up.

We will be contacting all of the motorcycle media concerning this event.
J

From West Coast to East