Jinkster's "how to synch your busa"

1. You're gonna need a manometer (4 bank vacume gage) of some sort..I highly recomend Motion Pro's Mercury Stix..about $79 from Ivan and well worth it as they'll pay for themselves the first time you use them.

2. The vacume hose/manifold as supplied from the factory absolutely suxed to try an remove...like they put'em on using some sort of super adhesive...I wound up having to slice mine off with a razor knife so...for that reason?...I also recommend that you have a couple of feet of 4mm (or 5/32ths) I.D. vacume hose handy before you start...you'll see why..as follows..

Step #1: Remove your seat and raise your tank up on it's prop rod.

a. Remove the 10mm bolt (threade into the frame) from the front/center of the airbox.


b. Loosen the 2 phillipshead clamp screws (1 on each side) which clamps the rubber boots from the airbox to the throttle bodies..there's only two screws to loosen as each tightens and/or loosens BOTH boot clamps on either side...and you can run'em out good and loose...there's plenty of thread There are (3) things to disconnect on the underside of the rear of the airbox...

1. "The Vacume Sensor" (by removing the screw as it appears the sensor is supposed to just slide off the tab but mine was so tight it was just as easy to remove the screw rather than risk any breakage) also...don't figure you can just unplug this as you'll need it so the engine can run properly during synching and..

2. "The Crankcase Breather Hose" (located in the center) and..finally?..

3. "The PAIR Supply Hose" on the far right side (if still so equipped as mines been removed where the orange vacume cap is)...as follows.. your airbox should now be free to remove except for one last vacume line which goes to your airbox flapper diaphram in the center underside of the airbox..just pull it free and set the airbox to the side to reveal the following... 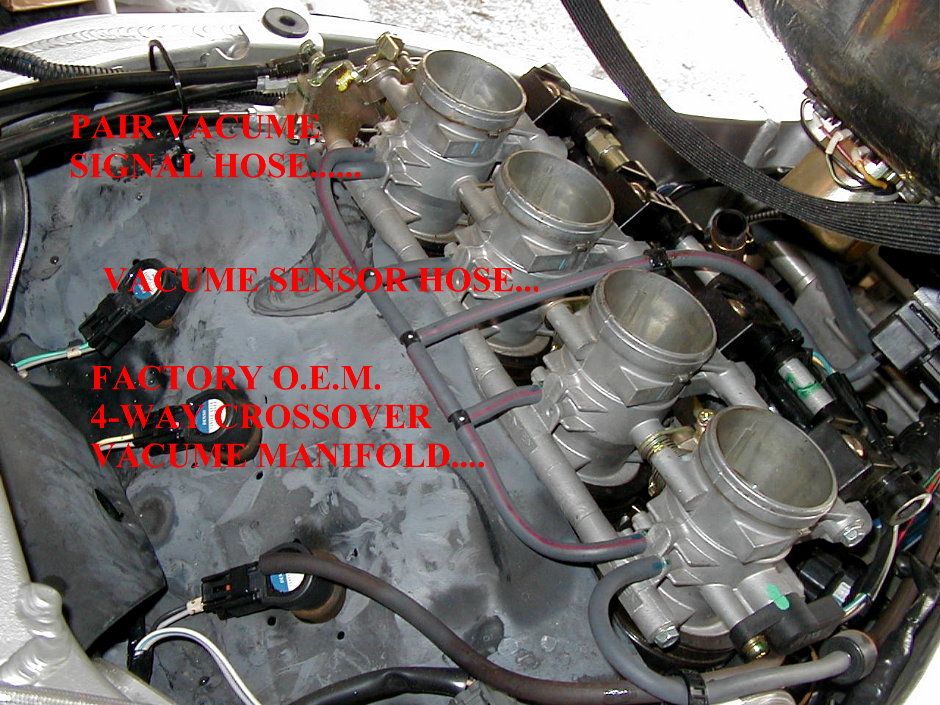 Except For The Far Left Vacume Hose On T-Body #1

Remove all of the vacume hoses from the throttle body nipples by slicing them with a razor knife as they seemed to have some sort of super adhesive on them..then hook up your vacume monitor like so....and...

"NOTE/WARNING": WHEN USING MERCURY STICK SYNCH GAGES DO NOT REV YOUR ENGINE MUCH OVER 4-5K RPMS CAUSE IF YOU DO?...YOU RISK SUXING MERCURY INTO YOUR INTAKE SYSTEM AND YOU WILL GET TO WATCH YOUR ENGINE BLOW BEFORE YOUR VERY EYES AND YOU WON'T HAVE TIME TO EVEN THINK..."OH SHID" There are (3) cad plated (gold) adjustment screws located between the T-Bodies easily identified by a screwhead that will accept either a flat blade or phillipshead screwdriver..be careful not to put any downward pressure as you adjust them as follows... after synching is complete...connect your vacume lines like so by jumping 1 too 4 and 2 too 3 with a "T" for your vacume sensor hose like so.. Why did you reconnect the vacuum lines the way you did? Im guessing is because you no longer have a pair???

Registered
Sorry I don't know but what is this modification for?
F

I remember my Dad setting up his old multi carb british cars the same way. How about a Manometer leasing program for your FL neighbors

Registered
I have a digital manometer. I suppose i could hook hoses to 1/2 and balance to 0 -same for 3/4 - then hook to 2/3 -- no sucking mercury but digi mano's aint cheap
T

+1 my ignorance is showing now.
performance upgrade or routine maintenance?
Click to expand...

Basically, the bike will perform better and more efficiently if all 4 fuel FI bodies are working at exacly the same rate. Matching the vacuum each one pulls separately accomplishes this. Now that Bill did this, it has me wanting to do the same thing, more or less just to see how far off it is now!!

Back in the carb days it was VERY important to do this in order to maximize the mechanical igntion/timing, etc. If one carb was running lean or rich it serioulsly impacted the igintion adjustments.

Registered
hey for all you grease monkeys out there i got a question/rumor i would liked made clear. Iheard aligning the 4 spark plugs in the same direction like so ^ ^ ^ ^ would increase power and response?? any takers??

(JustBusa @ Feb. 25 2006 said:
hey for all you grease monkeys out there i got a question/rumor i would liked made clear. Iheard aligning the 4 spark plugs in the same direction like so ^ ^ ^ ^ would increase power and response??  any takers??

It will as long as they're aligned the right way. You're talking miniscule amounts though.

Registered
Never heard of that -- right plug, gapped straight and square, dab of anti-sieze and yer good to go.

Donating Member
Registered
Reset idle speed and reset TPS? Indexing spark plugs make sure you spend alot of time on that one meanwhile I will be out riding.

Synching the Throttle Bodies is an important aspect of thorough tuning and maintainance and plays a large role in how well your engine performs with respect to increased power, snappier throttle response and greatly reduced engine vibrations...also....once properly synched?...your bike will exhibit easier, more consistant start-ups with a steadier and more rythmic idle quality.

+1 my ignorance is showing now.
performance upgrade or routine maintenance?
Click to expand...

(JustBusa @ Feb. 25 2006 said:
hey for all you grease monkeys out there i got a question/rumor i would liked made clear. Iheard aligning the 4 spark plugs in the same direction like so ^ ^ ^ ^ would increase power and response??  any takers??

caught somewhere's between myth and negligable...envouge about a decade ago until the sparkplug shimming igiots noticed the benefit was nearly immeasurable.....and then that minute gain was blamed on the fact that the act of shimming the plugs actually caused less of the plug itself to take up combustion chamber space..because the plugs were now shimmed up...thereby creating just a tad more volume in the combustion chamber.