I get my bike delivered

Registered
I will get my Ducati deliverd tomorrow!!!!
I can't wait!
I won't be able to sleep

the duc says:
"love me now"

the busa says:
"love me later"

you must be torn... young love.

the busa says:
"love me later"

I will be hard to choose which one to ride this season.

Registered
Always cool to get a new toy....How did it come about that you got a new Ducati.....gotta be fun..know what you mean..hard to sleep..how's the weather..are ya gonna be able to take a test ride..break it in hard and fast if you must..
Happy for ya.....let us know..Fabusa....ride safe honey.

Well, I was at the bike show in December. And was drooling over the 999S. When the monster caught my eye.
I went over and sat on it and thought wow!! This feels good.
I spoke to the guy there and crunched some numbers.
I went home thinking that isn't all that expensive?
So one week later I went to the dealer and filled out the papers for a used 750 dark. But he called me back to tell me I was approved but he has a brand new 750 senna for $27 more a month with less intrest. And he even added a set of FBF high pipes for no tax too!!
So I said ok i'll take that one and before I could really think about what I just did I was a proud new owner of a Ducati monster.

Registered
I might be able to ride it up and down the road here. Only if the snow storm we get dosn't come tonight

Administrator
Registered
It sounds like you got a great deal. I am looking forward to hearing how much you like it. Injoy the bike.

Hi busachick,
Congratulations...I'm waiting for the pictures. I love duc's as well, John Valk BMW motorcycle just got the a dealership to Ducatis and lucky for me, it's only two doors away from where I live. I can't go over there. No more bikes for me, at least not until next year.

Looking forward to those pictures.
M

Registered
CONGRATS BUSACHICK (and fellow Ducatisti)! Just wait until you hear that sweet Italian music at WOT. You won't have the top end rush of the Busa; but, the midrange grunt and "on rails" handling of a properly setup Duck is hard to beat.

Hi busachick,
Just found this picture for you. It was taken down in Laguna. This is Cannery Row. Ducks are hot down there. There were groups and groups of Ducks everywhere. check it out. 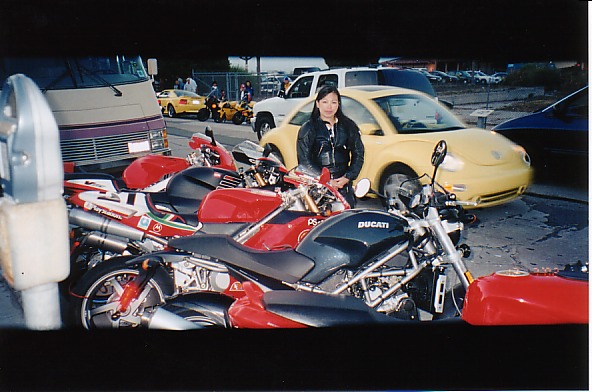 How do I choose which bike to ride? Well it's easy, unlike you, I can only afford one!

Registered
Hope you are out with your new bike, at least for a little while.

Donating Member
Registered
Congrats Chic-a-dee. I'm sure you'll be ripping up the pavement and turning heads with the bike.

Well it's tomorrow were you able to sleep last night.

I hope the weather cooperates. Injoy your day.

Administrator
Registered
The weather had a tendency to mess up your fun. The first day I ever put my boat in the water I made it about 100 yards out and then we got a tornado warning. So back to shore I went. The day I picked up my Busa it was a down pour all the way home. I hope Mother Nature likes you better.

(jwcfbd @ Jan. 03 2003 said:
The weather had a tendency to mess up your fun.  The first day I ever put my boat in the water I made it about 100 yards out and then we got a tornado warning.  So back to shore I went.  The day I picked up my Busa it was a down pour all the way home.  I hope Mother Nature likes you better.
Click to expand...

Jwcfbd
Well it snowed sooo hard!!!!
But they didn't deliver it. Mixup in keys