Hope you don't kill yourself on that thing!

Registered
Anybody else have someone say that to you as you pull up on your Busa? I have gotten that twice now and I need something witty to say in return. Last one was a customer. Pulled up to give him a bid and he was standing outside. "Hope you don't kill yourself on that thing!" was the first thing he had to say to me. I thought, OK, this guy knows nothing about bikes. We went in his house and he was obviously a Harley guy judging by all the collectables and crap he had.

Registered
That is what I did too. Didn't even acknowledge the statement. So you've heard that one too Robert?

Registered
Tell 'em "You're too late...I've died twice this week"

I don't hear that one often. I always hear "if I owned one of those I would kill myself on it"

Registered
Ask him how many helmets he owns.

Registered
I just tell them it's the slow model

Registered
" I know, right" is my typical response.

Moderator
Donating Member
Registered
"I would rather die having fun on this bike than while sleeping my life away in a recliner."

Donating Member
Registered
i wont die on this thing....the reaper cant catch me on his harley

Registered
My response is always simple....Dont kill me then in your car! Most bike accidents are caused by people not watching out for us bikers.

Registered
Yeah, now we are talking. Some good responses so far guys. Glad I am not the only one that had heard this. What a stupid thing to say to someone.

Donating Member
Registered
"These Hayabusa's are completely safe,untill you add other motorists."

Registered
I cut it off at the pass, whenever someone says that to me, I point to my license plate and say "see? the plate says 'slow1.' The bike is pretty fast though!" 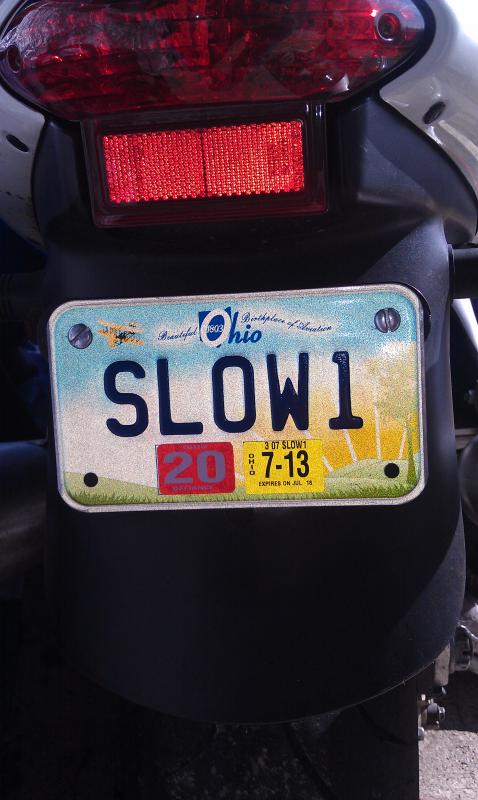 Registered
"It only goes as fast as my right wrist will twist it!"

Registered
Response: "That's what she said"

Registered
Nobody dies on the motorcycle, it's when they get off abruptly that things go wrong.

Registered
Got it again yesterday. Ran to a supplier for a small item I needed that I could carry on the bike. Guy says to me as I am pulling out "Careful on that thing, don't kill yourself" as I was pulling away. I just twisted the throttle and kept going. I guess I am not going to get around. Apparently people love the looks of the Busa but also think that it I a death trap.

Donating Member
Registered
So say the Harley crowd, with their half lids and no protection.

Hey Capt. ! Again you have outdone yourself...

You'll kill yourself on that thing
2