Donating Member
Registered
Some photos from the Silverstone Race to the Sky, which is a major international hillclimb that takes place every year in New Zealand (Cardrona to be specific). This year's event was in tribute to Possum Bourne, a Kiwi rally star who sadly died in a road accident at last year's event.
Some highlights included a Quad (4 wheeler) powered by a 400hp turbocharged suzuki Hayabusa engine, a 650hp hillclimb special space framed EVO 8, a 600hp WRC Impreza that Possum ran last year and was run in tribute this year by Kenneth Erikkson, a 600hp Toyota racing pickup driven by Rod Millen, and a 950hp Suzuki Escudo from Japan (same basic car as the infamous Pikes Peak Escude from GT3 fame). A pretty cool event other pics 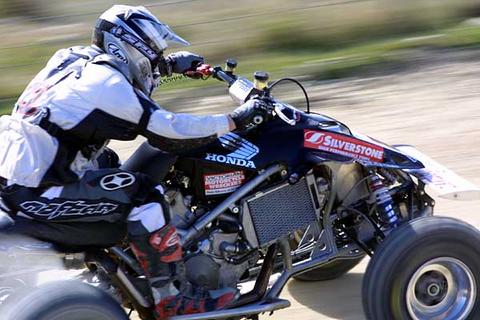 says honda on the tank

Its a Honda ATC250R frame. It is probably the best platform to build any type of racing quad.

Donating Member
Registered
Its whats under the tank thats important

Donating Member
Registered
THAT WOULD SCARE THE PISS OUT OF ME!
K

T
One Lap of America