*WD-40 & Motorcycle Chains*
Some interesting information on the use of WD-40 on motorcycle chains:

"Saw your article on using WD-40 for chains and you asked for evidence of potential harm that WD-40 can do, so am attaching a photo. This photo is of a bearing surface from an airplane.

This is a ball and races in a sealed bearing that had been subjected to regular use of WD-40 for a year or two (see attached photo below). The grease was NOT cleaned out before taking this photo - there simply is no grease and the brownish tint is really rust.

The ball had grooves (visible) and was shaped like a potato chip. The races had not evenly worn (see sectioned edge) and were rutted in spots, although neither shows too well.

We learned that WD-40 is really good for the light uses that it was intended for and that needs to be emphasized. However, it is largely a penetrant, which will do just that!

Once it penetrates into the sealed area, it dissolves the petroleum out of the grease, leaving the clay binders. What's left in the bearing is essentially dirt that cakes up, causing the balls to skid. Without the petroleum, the bearing will also rust.

The reason that kerosene and diesel fuel are still favorites and recommended by the chain people is that while both can be penetrants, they are a thicker petroleum and just what the O-rings are trying to seal against. Of course, gasoline cleans about the same, but with thinner viscosity and better penetrating power. In all honesty, I still use gas to clean (I'm lazy), but don't beat the bike often, regularly measure for linkage stretch and sprocket wear, and re-lube on every other tank of gas."

Moral of the story is to not use WD-40 for cleaning motorcycle chains. 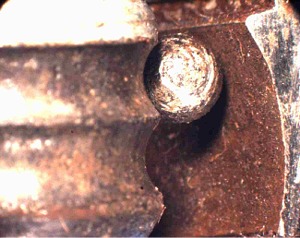 Donating Member
Registered
Well 17000 miles with a liberal spraying of WD40 every 300-500 miles and then a good wipe down of the ole chain and I'm still good. I guess WD-40 doesn't penetrate those squished O-rings very well.

Donating Member
Registered
interesting what exactly is that a picture of?

A bearing off of a airplane...not a Busa part

Registered
WHATEVER! I hose the rag down with WD-40 and wipe the chain down. When it's nice and shiney gold I'm done. It's more about getting the dirt off the chain than soaking it down to kill the grease that is protected by the O rings.

In all honesty, I still use gas to clean (I'm lazy),
Click to expand...

Now that is who I'd take advice from.... A guy that uses gasoline as a cleaning solvent...... Not!

wonder what my purple stuff does


thanks for the info and I have read and heard of wd40 likes and dislikes before, and the above is probly true. From my experience I have used wd40 since I was a lil kid and I still use it for a surface cleaner and allways follow up with a good chain lube and it has worked for me. Over 14K on my 2nd stock chain and still strong w/ no sign of heavy wear.  However Kerosene has been most recomended for cleaning.

In all honesty, I still use gas to clean (I'm lazy),
Click to expand...

Now that is who I'd take advice from.... A guy that uses gasoline as a cleaning solvent...... Not!

Things you should know about wd-40
2