Registered
I currently have the stock kick stand on my bike, but I'm always parinoid that its going to fall over. Are the center stands more stable? And do they make working on ther bike easyer? Do you loose ground clearance in turns from them.

I would like to hear from anyone who has one.

Administrator
Registered
I have on and love it. It makes chain maintenance a lot easier and it is very stable. As for loss of ground clearance I'm not sure because I don't ride that aggressive, yet. Still learning.
J

Registered
I bought one with the bike, and I love it. Easy chain maintenance, and a lot easier to take a wheel off if you ever get a flat tire.

The only disadvantage I've found is that a bottom small section of the bodywork (the "bellypan" I guess you'd call it), has to be removed for the center stand to fit.

As far as stability, just remember this:

With the side stand deployed, you have BOTH tire contact patches plus the side stand contatc patch, and the total square inches of contact is therefor MUCH larger, so the pressure on the side stand patch is lower (i.e. the sidestand is less likely to sink into hot pavement than the center stand is).

In addition, if you take the time to ensure that (a) the bike's front end is either at least level to the rear end, or higher, and (b) the wind is not blowing from the rear of the bike to the front, and &copy; the parking spot is either level or tilted TOWARD the left (rider) side of the bike, the side stand will provide more reliable protection against wind tipover.

Registered
I don't like the ground clearance loss. I use jack stands in the garage.
K

Registered
Using an aftermarket stand is NOT as effective as using a centerstand, for a few reasons:

1) It's not there on your bike, miles from home, when you need it

3) When you are actually putting the bike onto the stand, you have much more stability when using the centerstand, than when using the aftermarket stand. With the centerstand, you have physical control of the handlebar (and thus frontend), and physical control of the back grab bar (and thus control of the back of the bike). With the aftermarket setup, you are first destabilizing the entire bike by lifting it off the sidestand left side first and then right side (because the bike leans to the left on the sidestand), all from the point of worst leverage (rear axle), and then you have very little control while tilting the rear axle into the cammed final position. Sure, it's a little easier if you have two people, but how often is that going to be the case?

With bodywork caosting what it does these days (check out your insurance premium breakdown), I'll stay with the centerstand!

Registered
I have always used swing arm stands on my bikes currently using a Lockhart Philips stand with the buttons cost me $110 best tool for working on bikes by far.

Registered
I had a factory center stand on my ZX-11. Loved it. Where and how much for the busa?

Registered
I've got a rear stand from suzuki and love it.

It takes some practice and patience to learn to lift it by yourself, but once you do, it is VERY easy to leverage up. Bike feels very light with that stand. I can lift my wifes Gixxer with a few fingers.

I haven't had occasion to remove the rear wheel, and like it was said above, I can't take it with me, so some down sides.

I love the twisties, and don't really want anything else hangin' down from the bike.

Administrator
Registered
I got mine through the dealer that sold the bike to me. I it was aroung $100.

Registered
I've got a centerstand installed there are a lot of advantages.The stand has to come off if you take your bike to the track. So far the best race stand for me is the Pitbull stands with the front extentions that let you put the front end up and take the tire off as well as the forks.
B

Registered
I JUST installed my center stand yesterday, and it is the greatest. Two words "chain maintenance". You don't have more stuff laying around the garage (ie., fork/swingarm stands), its always with you when you need it, etc. However, I don't do track days either "the tar is my track!". Mine only cost $90 from the dealer, and I put it on. I do miss the 'rear cowling' though. I did find it to be a fairly major pain to put on, but it did eventually work out as it should have.

Simply a must have.No qualms about it. You can get it from any Suzuki dealer. I think I paid around a hundred for it. Go with the centerstand forget the aftermarket stuff. i've changed the rear tire twice on my 02, as far as I'm concerned the stand pays for itself the first time you leave it in a parking lot and don't have to worry about it falling over. Suzuki kickstands are the worst. Trust me I know. As far as ground clearance, if you can scrape it you're more a man than I. Good luck putting it on though. What a pain in the ass. Took about 3 hours. If I had to do it again, I would pay to have it put on.
K

Registered
I don't want to remove my cowling underneath as suzuki put it there for aerodynamics so I'll stick with my lp stand. I use the center stand when working on my zx11 but remove it when I ride...............
W

Registered
I find the center stand to be a great asset. Yes it's handy for chain lube, chain adjustment and tire stuff but I find it the handiest when I'm away from home. From off camber roadsides to loose gravel, it holds the Busa steady when there is no way for the sidestand to work. I've never had it interfer with the twisties or high speed, but then I've only had it up to about 175 (speedo was coming up on 200 but is a typical Busa and reads fast). 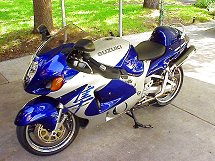