Registered
My Busa and I went down today. I'm fine. I wasn't hurt even a little. But the Busa is sad shape, cosmetically.

I was at a four way stop intersection near my house. I had pulled up about seven feet behind a car that was also stopped waiting to go. I was in his left wheel tracks, so clearly visable in two mirrors. From the right a semi-truck was making a left turn in front of us. The car driver in front of me decided to back up to give the semi-truck more room. I yelled, I honked, I revved my engine, and I tried in vain to back away from this car now backing into me. Nothing worked. He backed right into my front right side, knocking me and my Busa down to the left. He was still backing up as I jumped up. And he was starting to pull away when I started pounding on his window to tell him to stop. He never knew I was there or that he had hit me.

It was a terrible experience. And a helpless one. As much as I tried to back away, there was no escaping that bumper coming at me. Even after I was down he still backed up another foot or so. He didn't stop until he was far enough back that my bike was partially under his car and I had to have him more forward a bit so I could pick the Busa off the street.

Fortunately I am not hurt at all. He was not hurt at all. And he was nice about the whole thing once he realized what had happened. We exchanged info and my insurance promises to help get the bike back into mint condition (by billing his insurance of course.)

This pic shows where his car hit me. 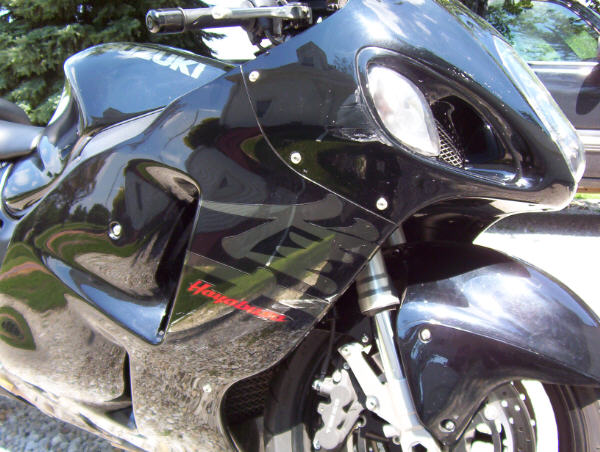 Registered
This pic shows where the ground and Busa met after the car knocked us down. 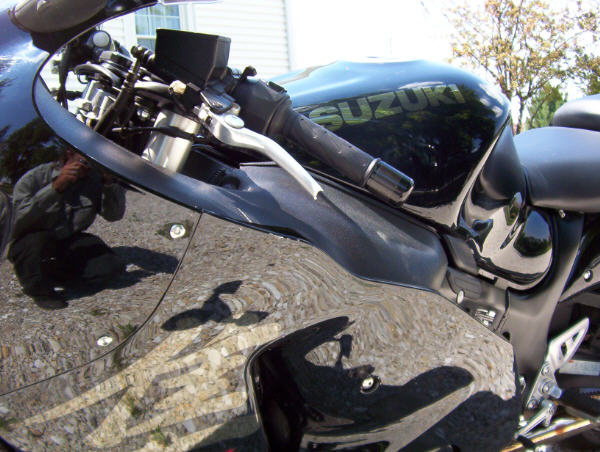 Donating Member
Registered
FLCN72, its time like this we would like to take the cage drivers and knock some sense into there peanut heads. Glad to hear no injury to your body at least. We try our hardest to be seen by other people and it is amazing how many times we hear about this kind of accident. ( I didnt even see you there). The repair shops can do bang up jobs repairing the bikes, but it is always in the recesses of the mind that the bike is not pristine anymore. I just get pissed off when I think about these kind of drivers. Again, glad you were not hurt. Bob

Donating Member
Registered
Glad you're ok. I had sort of the same thing with a car backing out of a parking space.

Donating Member
Registered
Sorry to hear that man, looks like you need to do the air horns mod, that would get some attention.

Glad you are A-okay though.

Donating Member
Registered
It's amazing how stupid people can be. The semi-truck knows the car is there, so why back up? No truck is going to drive over a car in that situation. That's as bad as people stopping in their lane on a four lane road to let someone come across. Glad to hear everything will work out.

Donating Member
Registered
It's amazing how stupid people can be. The semi-truck knows the car is there, so why back up? No truck is going to drive over a car in that situation. That's as bad as people stopping in their lane on a four lane road to let someone come across. Glad to hear everything will work out.
D

Registered
Glad to hear you are ok, and the bike can be repaired at someone else's expense...... Just goes to show you "CAGERS" are much more careless than we like to imagine.

Registered
Sorry for your emotional pain, glad you do not have any medical pain.
G

Registered
glad to hear your ok. Busa doesnt look to messed up (unless bad pics of coarse) so that guys money should get your bike back to beautiful in no time

Registered
Damn, that sucks! I'm glad that your okay!

Registered
Damn, that sucks! I'm glad that your okay!
B

Registered
Hey Oracle,
Weren't we just talking about putting horn mods on our bikes?  AUUUUURRGGGGHHHAAAAAA  Maybe that would have gotten the cage's attention.

Glad to hear you're OK, FLCN72.  Sorry about your ride.
F

Registered
I'm starting to freak, worrying about whether it will be possible to get all that special edition black plastic replaced. The dealer I took it to for the estimate seemed to think that nearly all the plastic and the tank were going to have to be replaced to get the bike back into mint condition. Plus the aftermarket front turn signals and the left side exhaust canister (also aftermarket.) The three people looking it over at the dealership weren't too concerned about major mechanical damage, but did say there might be other problems under the plastic, like broken brackets and the like. The parts people didn't know what to tell me about getting replacement parts in factory black. Perhaps in a day or two they'll have some good news.
F

Just erase this one...

R
another friend down
2