Are kids great or what?

Donating Member
Registered
I had some stuff to do this morning and some runnin' around this afternoon. Got my stuff handled this morning and met my Dad for lunch. I meet him and eat lunch with him almost every weekday that I'm not workin'. Nobody on earth has a better Pop than I have and I enjoy spendin' time with him. Good times!

Anyway, I left lunch and headed to handle my errands. One of 'em was a trip to Wal Mart to pick up some pen refills and check for more toy busas (more on that later). As I headed that way I just thought about my three year old nephew (the twin brother of the niece lost in the accident). He stays with my uncle and grandmother at the family business during the day. They are both pretty old fashioned "tough love" types. Usually when I go to the office he's off in the corner somewhere all by himself just playin'. He doesn't have much to do with them. I guess he doesn't really know how to take their personalities. They're both great folks, they're just "no-nonsense". He always jumps up to greet me when I go in. We play until I leave and he goes back to the corner.

Of course he says he wants a toy from Wal Mart. He thinks my motorcycle is the sheeyot so I tell him we'll try to find him a motorcycle. That got a huge ear to ear grin. We go out to get his child seat out of pawpaw's yukon and he says, "I can get it, Chris." He opens the door (on his tip toes), gets the seat out and installs it in my Maxima all by himself.

Once he's strapped in he says, "I like widin' in your car with the woof open." (yeah, he sometimes babies his "R"s) So, we open the sunroof and head out for Wally World.

Of course we hit the toy section first. He's checkin' out all the little toy bikes and pics out a Honda VFR, not because of what kind of bike it is, but becuase it's red.

I dig through the new case of Maisto bikes and find me another busa as well. Got a blue/silver this time.

I was as stoked as he was!

Well, before we can get off of that isle he spots another red one he likes. I tell him to get it without lookin' to see what kind it is.

After we get the stuff I went for and get to checkout I realize that the second bike was a freakin' ZX-12R. Oh well, I'll have to teach him better when he's old enough to understand.

we get back to the office and play with our new toys for a while. We're doin' wheelies and all sorts of wild ridin' when he say, get this... "Let's race, Chris!" Myyyyyyy BOYYYYYYYYYY!!!

At that point I was glad he got a 12R. I'd hate to get my arse handed to me by a three year old. If he had chosen the yellow/silver busa instead of the 12R I'm afraid his size and weight advantage would have been enough to throw the odds in his favor.

When we were done playin' I get my hug and leave for home. It wasn't until then that I realized that this simple trip to Wal Mart and a few hours with him relaxed me as much as ridin' the busa. Yep, it's true. The whole time I was with him I never once thought about work, money, problems, or any of the other bullshid that's had me wound up lately. It was just me and him havin' fun. If I hadn't swung by and picked him up it would have been just another afternoon runnin' BS errands. I'm so sick of that!

This afternoon sort of put some things back into perspective for me. That's somethin' I've really been needin'. I just hope it meant a fraction as much to him as it did to me. Anyway, just thought I'd share it with ya'll. If you have kids, thank who or whatever you worship every day for them. A family of my own is at the top of my "Things I'd lose the busa for..." list. Someday, God willin'... 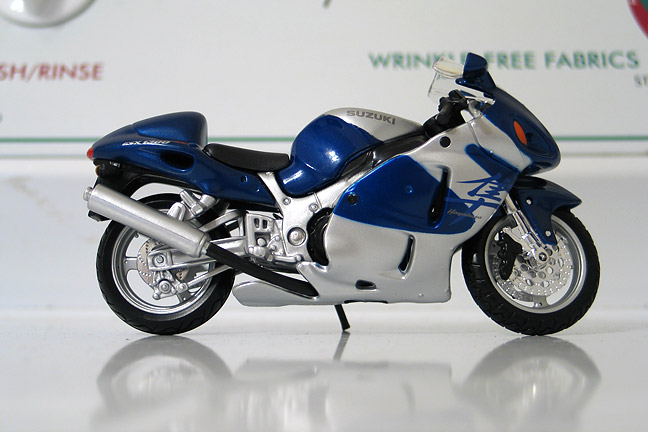 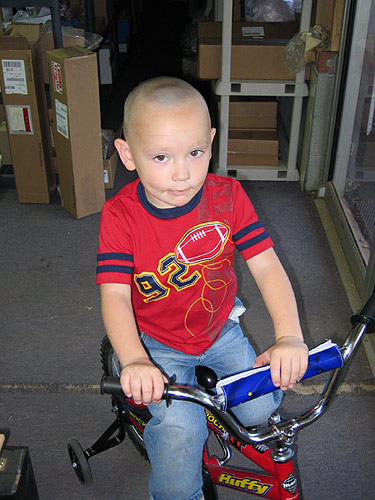 Yeah, kids...definitely good stuff! Glad to see that you both had a blast!

Thats why I plan on acting like one for a few more years.

Yeah, I'd love to have one or two of my own. Just gotta find some chick that's crazy enough to put up with my shid but not too crazy for me to put up with.

Thats why I plan on acting like one for a few more years.

Donating Member
Registered
Sounds like a great day bro....all except for the ZX12 part....that's kinda funny!!

Yeah it was a blast. So, where you been? Haven't heard from ya in a while...

Yeah it was a blast. So, where you been? Haven't heard from ya in a while...

Donating Member
Registered
Did ya save me a cup of fresh ones out of that 2.8 mil?

not sure how fresh they'd be by the time they got to ya bro
Click to expand...

Prolly as fresh as the ones in the grocery stores.

Just eat a bunch for me. You prolly don't even eat 'em since you work with 'em. Prolly sick of even seein'em, huh?

not sure how fresh they'd be by the time they got to ya bro
Click to expand...

Prolly as fresh as the ones in the grocery stores.

Just eat a bunch for me. You prolly don't even eat 'em since you work with 'em. Prolly sick of even seein'em, huh?

Staff member
Administrator
Registered
You just stepped in to my life BT! My kids love Wal-Mart, know how to get there, know where the toy section is...and the collection of race cars and motorcycles is getting out-of-hand lately!

Sounds like you made his day...it's pretty easy to make a kid happy. We're still learning that buying a cool toy isn't always what they want...it's the box you take and make in to something else that's more fun! Or, it's lettin' 'em jump and lay in mud puddles that's a blast, not the riding toy you just spend your pay check on...

Yeah, you need some kids there BT! Of course, that'll cut in to your "Busa cleaning" time!

Great story...glad you two had some time together playing with boy toys...

Thanks bro. your thread brought a smile to my face.. cool.

And you would be amazed at the little things that stay with kids all there lives.

That little rip to Wally world, for all you know. could be one of those memories that just stay with him all his life and might being a smile to his face as an adult when times are rough.

I know sometimes when I think about stuff when I was a kid, there are small glimpses of things I remember that bring a smile to my face and make me long to be that kid again.

I have a feeling from your description that you are providing those "good feeling" memories to him..

My boys are my life, no doubt about it..

Registered
Thanks BT! that was a great story. You are doing positive things for that young'un!

Those little rug rats are why I do what I do, teaching and (don't look Michelle!) scouting.

thanks again Chris!
You must log in or register to reply here.

Now this is a tough kid