any experience with FNX Tactical 45?

Registered
Now that I got my 45acp SWC bullet mold, I'm leaning away from the Sig p220 target elite to the FNX due large to magazine capacity

does anyone have any negatives for me to consider before I drop hammer? 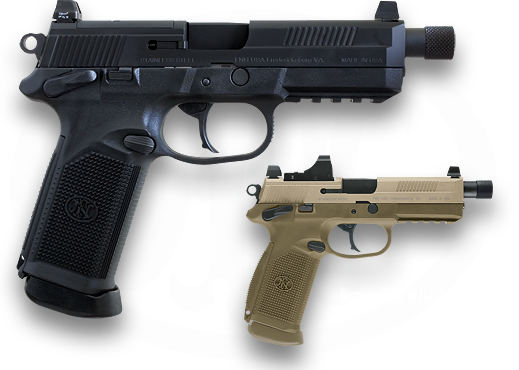 Donating Member
Registered
haven't read any reviews strom....do a search see if there are any

Donating Member
Registered
Are you planning on mounting a can on it?
If not you don't want model depicted above as it has suppressor sights and threaded barrel.

Also something to consider is the rifling in the barrel.
If it is a polygonal type like a Glock instead of a broach cut you won't be able to shoot cast lead thru it.

chrisjp said:
haven't read any reviews strom....do a search see if there are any
Click to expand...

lol, I can read lots of opinions online, I goto friends first!

Blanca Busa said:
Are you planning on mounting a can on it?
If not you don't want model depicted above as it has suppressor sights and threaded barrel.

Also something to consider is the rifling in the barrel.
If it is a polygonal type like a Glock instead of a broach cut you won't be able to shoot cast lead thru it.
Click to expand...

Have not rulled out the can...good point on the polygonal rifling, I better check that out (although I get both versions on that topic from the "lead heads"), I think it could let gas past & gum up a barrel. will check on it. thanks a bunch.

Registered
I found this quote:

Re: Anyone shoot lead bullets in their FNP 45
"I've shot lead bullets exclusively through my fnp 45 for over a year now. Well over 10,000 rounds shot during competitions and practice/plinking.
A lot of people bash lead bullets because they lead the barrel. They will only lead the barrel if you have a bad load,(too fast, bad lube, too hard of an alloy, or wrong size bullet.) 99% of the time it's due to the bullet being slightly too small. Cast bullets need to be 1-2 thousandths over groove diameter. (.452 in 45 acp in most cases) if you get a properly fit bullet with a good load, you can shoot cast bullets through any gun.
I shoot cast bullets exclusively through all of my pistols, glocks included. And a majority of all of my rifles, including my 308 30-06 and ar-15.
Properly loaded, cast bullets are more accurate, cheaper, cleaner shooting and easier on your gun than jacketed bullets.
Also, lead poisoning at indoor ranges is due primarily to the lead in the priming compound, not necessarily from lead bullets."

Sent from my S3 using Tapatalk 2

Donating Member
Registered
That grip looks like it has the same stippling pattern that is on my bear gun the FN Five-Seven. If it is you may want to hold that FNX for a few minutes and see what you think. I personally found it irritating and had to find a cover for the stippling. That's a personal preference though so you may love it.

Registered
I fondled ...er uh held it for a while today... felt good to me, I saw a Youtube where a guy softened the grips with sandpaper...I think I can deal with it, wear shooting gloves, or not. I also saw some bashing about the lower having MIM parts,,, I don't know, so many guns ... I plan on it for a beater... Thanks Nick, I will "hold" it some more, I could tell the knurling was sharp on the grips, good for when you are bloody or muddy, snaggy otherwise.
You must log in or register to reply here.

Anybody have any experience with air supspension

Incoming fire has the right of way