Registered
Just got back from a trip to the Pyrenees. One of the guys on my trip had a 2001 Busa. The bike is totally std apart from a Corona paint job by dream machine. It has 17K on the clock and I believe it to be one of the last unrestricted ones to be sold. He is the second owner and the first owner was a friend so the bikes history is well documented. I have the opportunity as he wants my bike to do a deal. What I would like to ask is are there any problems with this model. I have read posts that mention second gear but without any descriptions. Is this a selector problem or is it more serious and obviously is it an easy fix ? Is this more apparent on abused bikes ? Basically I would like my hand held in what I should look for. I have been riding over 40 years and do have a reasonable knowledge of bikes. I have never had anything but new bikes but am not in a position at the moment to purchase a newer model. After 1600 miles of riding with the Busa owner can see the bike has not been abused and is absolutely mint. Please help an old codger make his mind up ! Thanks in advance for your input.

Donating Member
Registered
The '99 and some / most of the '00 year bikes were unrestricted. A true 2001 will be limited. The second gear issue will or should be noticeable during a test ride. From what I've read I believe this comes from abuse. The Gen II is a little better on shifting and will hold up much better under abuse as far as second gear, but both Gen I and II have to be kicked into second and sixth gears with authority.

I believe the 2005 or 2006 up have a number of issues corrected. Nothing serious.

Donating Member
Registered
I'll just say this. I had a 2006 Busa and put 36K hard azz miles on it before I wrecked it. Never had a gearbox issue, but then again I wasn't at the drag strip every week shifting from 1st to 2nd without using the clutch...
R

Registered
This is the descripion and history of the bike from the current owner ; MOT May and serviced just before the trip (To be on the safe side) Its now got 17668 miles on the clock (Just run in) I bought it with 12104miles on it, so the mileage I've put on it (5564) was because of the last two euro trips. That's less than 2000 miles per year on average. It doesn't and never did go out in all weathers, its specifically a summer bike. Battery is left on trickle charge through the winter and it's always covered up in the garage. As I told you, my mate Steve owned it from new and he had it painted by Dream machine, he used to use it for trips to silverstone and Donnington with his missus on the back, and I think he toured the Highlands of Scotland once on it. His average yearly mileage was 1513 per year. He's moved onto Harleys now. It has been and still is a well looked after bike.
R

Registered
Just a pick to give you the idea of what the bike looks like ! 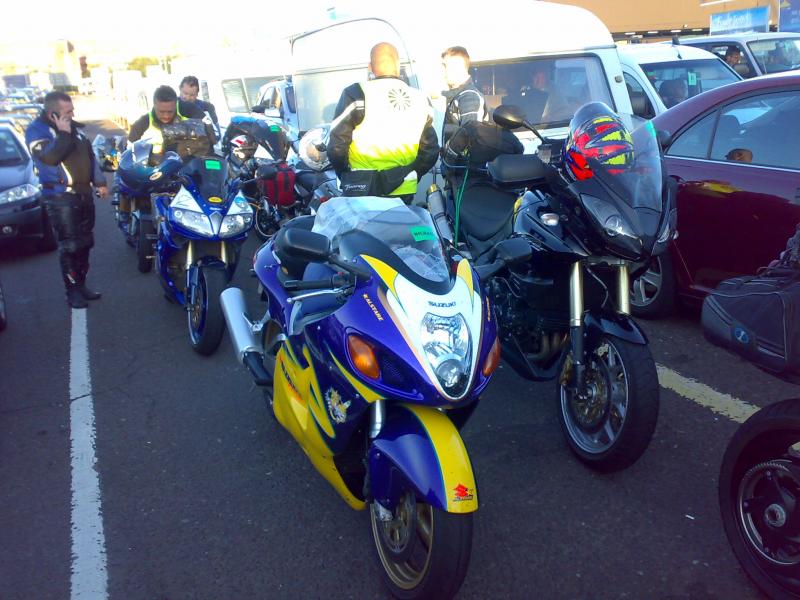 Moderator
Donating Member
Registered
I think you will be ok, if the history is well documented and you trust the owner, buy it if you are happy with the price. Some of the earlier models had issues with 2nd gear, but you will have to wait for others with more knowledge to chime in. Welcome to the oRg!

That bike looks good. Hope there are no issues to put you off getting it

That bike looks good. Hope there are no issues to put you off getting it

90% there. Just need to ring the insurance company Monday. All being well the bike will be mine very shortly !

Registered
Adrian Flux was cheapest quote for me by a mile

flombo13 said:
Adrian Flux was cheapest quote for me by a mile

Currently with Bike quote and only pay £180 for an SV 1000s fully comp protected and I live in central London. Always found flux to be quite expensive. My boy is in to Jap import cars and has always got AF`s quotes beaten !

Donating Member
Registered
welcome! i wouldn't sweat it too much on the "2nd gear issue" unless you physically notice it with that bike. i love the paint scheme alot! i had an 01' and pampered the piss out of it and never had any issues with shifting, especially 2nd gear. good luck and snap some side profile pic's when you get the chance.

Registered
£65 on top till policy runs out September. Quotes cheapest fo 12 months £433. Is that good or bad ? I live in London with full no claims !

Registered
£230 fully comp for me. Only 4 years no claims and points on my licence too.

flombo13 said:
£230 fully comp for me. Only 4 years no claims and points on my licence too.

Excess is just £250 ! Guess If I had 1K then premium would reduce dramatically !

Donating Member
Registered
Take the bike out for a ride and give it full throttle a few times in second gear. If there is a problem it will surface. BTW, great looking bike !
R

Registered
Deals done. The bike is 250 miles away in Stockton. Have arranged to meet half way this Friday !. Will post pics amd report of my first ride 100m +